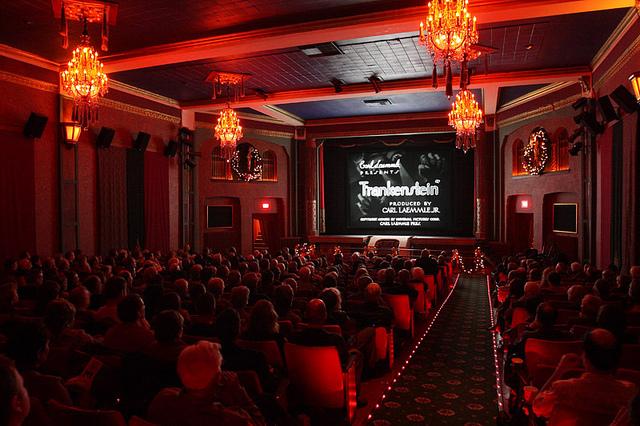 CC/Flickr/The Bakken Museum
“I don’t think to myself, ‘How can I compete with the AMC Roseville?’ Because there’s no way I can,” says Heights owner Tom Letness.

For first-run movie theaters like Columbia Heights’ historic Heights Theater, turning a profit is an uphill battle. Studios take a bigger cut of theaters’ ticket sales the closer to original release date—a film in its first week might net a theater only 20 percent of the ticket price (or less if it’s a blockbuster). Hence, profit margin on ticket sales grows the longer a movie plays. Studios demand a smaller percentage for classic films, which the Heights also screens frequently. “For me, at the end of the year, [margin] pretty much washes out around 50 percent,” says owner Tom Letness.

A limited-released film can take several weeks to become available in a mid-size market such as Minneapolis. But even if a film is available, Letness sometimes waits to rent it, thereby increasing his profit. “I discovered that people like my theater so much that if they know a film is coming here, they’ll just wait to see it.” Sometimes he’ll watch how a film draws at a competing independent, like the Uptown. “If they do huge business, then I know it’s going to do business here,” he says. “But if it’s very mediocre there, I just take it off my list.”

With a single screen, Letness faces challenges multiplexes do not. Most film rental contracts last four weeks, and breaking that contract can mean the theater can’t rent films in the future. (In cases where a film is bombing nationwide, sometimes theaters are allowed to pull a film after two weeks.) “Sometimes, if I have a very successful film, it can be here for six or eight weeks,” says Letness, making the likelihood of a repeat customer during that timeframe pretty slim. More importantly, if a movie isn’t drawing well, he doesn’t have other screens on which to show more popular movies to make up that loss.

With such a high percentage of ticket revenue going back to the studio, first-run theaters have a reputation for making their real profit in concessions, where the margins are typically better, especially on soda and popcorn. At the Heights, which specializes in highbrow independent movies interspersed with classic film series, tickets out-earn concession sales.

“Most big concessions [revenue] in theaters are [from] kids’ films. But when you get into middle-aged adults, and especially seniors, they’re much more frugal,” says Letness. He circumvented this challenge by buying the adjacent Dairy Queen and allowing customers to bring DQ treats into the theater.

“I don’t think to myself, ‘How can I compete with the AMC Roseville?’ Because there’s no way I can,” he says. “But I have something they don’t have: I have a unique space, I have a cool historic building, and I have an experience that is truly one-on-one. There, you’re basically just a number.”

As an added source of revenue, Letness rents out the theater as many as two or three times a month for corporate meetings, weddings and independent film releases. In 2014, the number of rentals doubled.