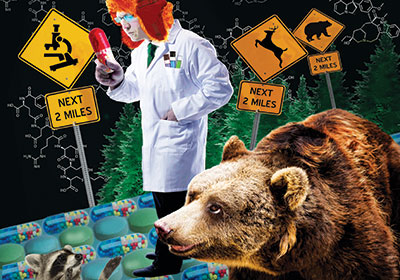 The pharmaceutical business in Minnesota has often flown under the radar, overshadowed by the state’s medical device industry. No company is more under the radar than ANI Pharmaceuticals Inc., based in the small town of Baudette—population 1,100–in extreme northern Minnesota, more than 300 miles north of downtown Minneapolis.

But what might sound like a shaky prospect—a company gone public through a reverse merger with manufacturing operations for generic drugs and other pharmaceuticals, in a hamlet billed as “the walleye capital of the world”—is emerging as an unlikely, fast-growing concern. In just two years ANI’s revenue nearly tripled in 2014, to $56 million, and the company estimates sales of $80 million to $88 million for 2015.

The generic-drug marketplace is an intensively competitive, price-driven, low-margin business. But in the big picture, generics are a growth niche, accounting for roughly 87 percent of all prescriptions dispensed in the U.S., according to Danbury, Conn.-based IMS Health, which tracks industry statistics. Generics accounted for 64 percent of ANI’s sales in 2014. Under CEO and president Art Przybyl, ANI appears to be carving out a few niches within the crowded generics trade.

In 2014, ANI spent $35.5 million in three separate deals to acquire products. Those transactions included acquiring Lithobid, which treats patients with bipolar disorder, and Vancocin, an antibiotic used to treat infections. The two new drugs have been helping to drive ANI’s growth. But the company’s biggest seller is an estrogen drug known as EEMT, which is used to treat symptoms of menopause. In 2014, EEMT accounted for 42 percent of ANI’s total sales.

Perhaps the most important number of note in ANI’s year-end financials: Cash on hand of $169 million. The company raised $50 million through a secondary offering of common stock in March 2014 and then $143.75 million through the sale of convertible senior notes in December. In both cases, ANI stated that proceeds would be used in part for acquisitions.

On a Feb. 19 earnings call with analysts, Przybyl noted that he’d stated ANI would be looking at deals ranging from several million dollars up to $300 million. “That to me represents the breadth of transactions that we are interested in,” said Przybyl. “I would be disappointed if we did not at least have one transaction take place in 2015. Our objective is to deploy our monies in a smart fashion. We’re not looking to overpay, obviously, for our assets and [are seeking] to deploy our monies as quickly as possible. That cash on hand on your balance sheet is not creating value for the company just sitting there.”

Rohit Vanjani, director of equity research for New York-based Oppenheimer & Co., is bullish on ANI: “People know that he’s going to use that money and buy more assets.”

Oppenheimer was one of the underwriters of ANI’s sale of senior notes. Vanjani points to ANI’s deal to acquire 31 generic products from Teva Pharmaceuticals, one of the largest international pharmaceutical companies.

“They did this deal with Teva where they purchased 31 discontinued products. . . . That’s been a catalyst for the shares,” says Vanjani. “For a big company like Teva, for them to bring these products back to market isn’t really worth it. . . . For ANI there can be little nuggets and jewels in there.”

Przybyl says that the market is simply responding to the solid numbers that the company is posting. “Our valuation has gone up as our revenues and our EBITDA has gone up,” says Przybyl. “Simple as that.”

ANI did not start in Baudette.

Founded in 2004, the company was originally based in Baltimore, with a manufacturing facility in Gulfport, Miss. Przybyl says that the company was originally working to develop liquid-based pharmaceuticals. While still privately held, ANI acquired the manufacturing plants in Baudette. Przybyl, a veteran of the pharmaceutical industry, was tapped as CEO in 2009. In 2010, he shut down the Baltimore office and relocated headquarters to Baudette.

Wall Street came to Baudette when ANI completed a reverse merger in June 2013 with Illinois-based BioSante Pharmaceuticals Inc. (In a reverse merger, a private company goes public by acquiring a public company that is struggling or simply exists as a shell company. For 2012, BioSante reported a loss of $27.7 million on revenue of $2.3 million.)

But Przybyl, a New York native, does not spend much time in northern Minnesota. He works out of a home office in Arizona.

“There’s no need for me to be there. It’s a manufacturing site. Senior management doesn’t have to be at the manufacturing site,” says Przybyl. The company’s annual report notes that ANI also leases office space in Wilmington, Del., and Laguna Beach, Cal.

Distribution from Baudette is not a problem, says Przybyl. “UPS, Fed Ex… this is America,” he says.

The history of the pharmaceutical business in Baudette isn’t just another fish story, however.

ANI did not simply parachute into Baudette and start cranking out generic drugs in the middle of the woods. The roots of the pharmaceutical industry date back more than 80 years. It began with the father-and-son team of Joseph and Ted Rowell, who tapped the area’s greatest resource—freshwater fish—to serendipitously create a new industry for Baudette.

The Rowells devised a method for extracting fish oil from burbot, a common but ugly fish (often called eelpout) plentiful in Lake of the Woods. Fish oil is taken medicinally for a variety of conditions, including lowering the risk of heart disease. The Rowells determined that burbot liver contained much higher levels of vitamins A and D than did Atlantic cod, and began selling its oil in the 1930s.

What began as the Burbot Liver Products Co. was renamed Rowell Laboratories in the 1949. The company was sold twice during the 1980s, ultimately to Solvay, a large pharmaceutical concern based in Belgium. ANI acquired the two Solvay facilities in Baudette in 2007.

“Those plants have been there for a long, long time,” says Przybyl. “When I first visited. … I was very impressed by those facilities and the workforce.”

Today, ANI plays an important role in the local economy. According to a year-end public filing, the company had 92 employees. Przybyl says the vast majority of those employees are in Baudette.

“They are a huge employer for our county and our community. We’d be pretty lost without them. They hire a lot of people and that has a big impact on our community,” says Judy Humeniuk, a retired schoolteacher who was elected mayor of Baudette in November.

“The city of Baudette is really glad ANI is here. . . . I understand that they are doing fairly well right now,” says Humeniuk. “We don’t have a lot of industry up here, other than the tourism.”

Przybyl says that he’s found that the small town offers a great pool of workers for ANI. “The advantages I’ve found is that you have a very captive, highly technically skilled work force,” says Przybyl. “We have very little turnover.”

While big in Baudette, ANI has just a tiny sliver of the U.S. pharmaceutical market. IMS Health calculated total U.S. spending on meds at $329.2 billion in 2013. IMS statistics show that generics now account for 87 percent of all prescriptions dispensed domestically.

IMS tracks 482 companies that produce generic drugs for the U.S. market. The 10 largest account for 47 percent of industry sales, and the largest 50 companies account for 87 percent of generic sales. IMS Health research director Michael Kleinrock estimates that the generics market is approximately $64 billion for 2014 in the U.S.

But smaller generic-pharma companies can thrive by cultivating niches where there’s less competition. And if fewer players are chasing a market, there is likely a pricing premium to be had.

“There are lots of niches,” says Kleinrock. “The demand is driven on a volume basis [but] margins are low. . . . What can you can do with the portfolio that you have? You’re not going to beat the largest companies head-to-head. It ends up being the benefit of being below the radar.”

Przybyl is looking to roll out five or six new products in 2015. Looking ahead, Oppenheimer analyst Vanjani is expecting bigger 2015 numbers for ANI than the company’s guidance of $80 million to $88 million: “I’m modeling above that,” he says. “I think they’re being conservative.”

Vanjani thinks that Przybyl is doing a good job leading the company, but offers a caution. “He’s done very well; a big portion of that has been on the EEMT opportunity,” says Vanjani. “It’s a great opportunity, but you don’t want to be leveraged to just one product.”

Kleinrock says that smaller companies that do well within niches draw buyout interest: “When you are a very successful player in your particular place, you might find yourself a target.”

With fast-growing sales and money in the bank, Przybyl is confident that he’s found a healthy prescription for growth. But Is ANI for sale?

“We’re not looking to sell the company right now. We’re looking to build the company, to grow the company—create value for our shareholders,” says Przybyl. “We have no desire to sell.”

Minnesota is known for Fortune 500 Medtronic Inc. and the legions of medical device companies that have followed in its wake. The state has never been considered a center for pharma, but the industry here is bigger than many realize.

Maple Grove-based Upsher-Smith Laboratories Inc., which produces both branded and generic pharmaceuticals, is the largest player in the state. The privately held company does not disclose revenue, but media reports indicated it had revenue of $451 million in 2011 and about 600 employees when it was acquiring the UK-based Proximagen Group in 2012.

Other players in the state have been sold over the last decade:

“We had a very decent pharmaceutical industry,” says John Bullion, one-time CEO of Orphan “MGI, they were very successful.”

Orphan Medical posted steady losses, but, Bullion notes, “We were spending all of our money in developing new products.” Jazz Pharmaceuticals Inc., then based in California, acquired Orphan for $145.4 million in 2005.

“There’s a reason why they paid $150 million for it,” recalls Bullion. One of the drugs in Orphan Medical’s pipeline was Xyrem, designed to treat excessive daytime sleepiness in narcolepsy patients. Today, the drug is the dominant product for Jazz, now based in Ireland. In 2014, Jazz reported revenue of $1.17 billion. Xyrem accounted for 66 percent of that.

“We can highlight at least 30 companies that are developing some really innovative things,” says Matter.