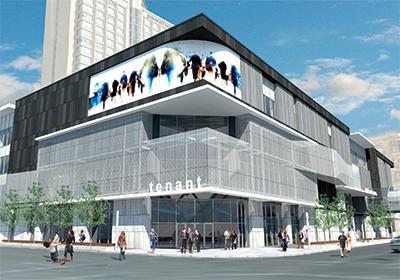 Mayo may be inside, but developers still have to fill the street corner spaces
with viable businesses.

Block E is being reborn. Again.

The failed — and dreadfully designed — retail/entertainment complex has new anchors, a new look and a new name: Mayo Clinic Square. The Mayo Clinic Sports Medicine Center is on the third floor; the Minnesota Timberwolves and Lynx are taking a big chunk of space for practice facilities and executive offices. But what many don’t realize is that the ground floor space is meant to contain… wait for it… destination restaurants and retail.

The $50 million renovation by Plymouth-based Provident Real Estate Ventures aims to make people forget about the days of GameWorks, Hard Rock Café and Hooters. But can the long-troubled property attract classy restaurants or even viable ones? Provident has 35,000-plus square feet of first-floor space to fill. Kieran’s Irish Pub remains a tenant at the corner of First Avenue and Sixth Street.

“What we’re trying to do is find unique national operators to come to this market” to fill the three other corners, says Phillip Jaffe, Provident’s principal and CEO. “When the property had an Applebee’s, nobody in Brooklyn Park is going to drive by three other Applebee’s to come downtown.” (Provident is also trying to lease out 70,000 square feet of second-floor office space at the property.)

But one experienced broker is encouraged by the new look. “Block E is cleaned up,” says Andrea Christenson, a retail broker with the Minneapolis office of DTZ. “I think it’s a whole different animal.”

But it wouldn’t be Block E without some wrinkles. Last fall Kieran’s Irish Pub sued its landlords over losses related to the construction disruption. Both Jaffe and Kieran’s owner Peter Killen declined to comment on the lawsuit.

Jaffe says that the common areas at Mayo Clinic Square will open to the public in May. “We spent a lot of time and effort to redesign it to make it more pedestrian-friendly,” says Jaffe. “We’re spending $50 million to renovate this property. … That changes the neighborhood.”