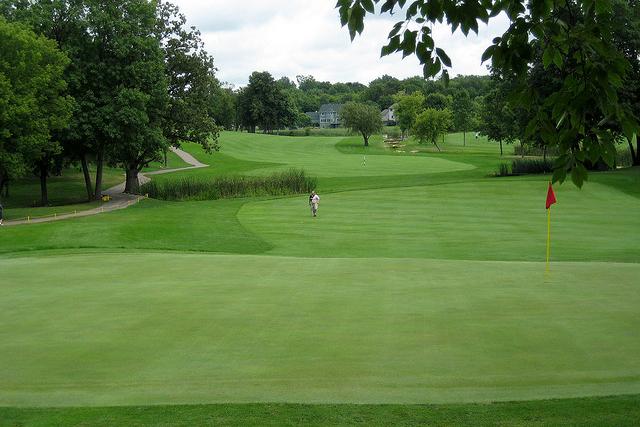 In the late 1990s and early 2000s, golf was roaring. Driven by a new, cool image thanks to the likes of Tiger Woods, courses across the country — and especially in the Twin Cities — were opening at a breakneck pace.

“Around the time Tiger was playing better, it was better for golf on the whole,” says Ben Lehmann, first golf assistant at the Minneapolis Golf Club. Now Woods is sidelined and trying to get his golf groove back.

The market overbuilt for a demand that eventually petered out. The economic downturn in 2008 didn’t help either, especially for young people with limited funds.

“Golf costs money and takes a lot of time,” Minnesota Golf Association communications director W.P. Ryan says. “It’s what young people don’t have a lot of.” And the new sheen that Woods imprinted on it couldn’t hide the fact that golf retained multiple stigmas: expensive dues, stuffy dress codes and a WASPy aura.

Golf clubs wanted to fight those stigmas. From daily-rate courses to exclusive, members-only clubs, they are loosening their ties, slashing their prices and trying to find ways to keep the pipeline full. “I don’t know that anyone has figured out how to get 18- to 34-year-olds playing just yet,” Ryan adds. But many are trying.

Deer Run Golf Club is among those. The privately owned course in Victoria focuses on a user-friendly, high-quality experience, but with daily rates instead of expensive monthly dues.

“Country club membership just doesn’t have the same cachet to younger people that it once did,” Deer Run general manager Tom Abts said. “Clubs have to recognize that they need to change, but that’s difficult because older members like the status quo.”

Though Deer Run’s target membership, influenced by its location just south of Lake Minnetonka, is affluent professionals about 40 years old living in the southwest metro, the club is making big strides to appeal to people across the spectrum.

Abts says his courses aren’t intimidating like some other clubs. Their golf and beverage carts are spacious and new, and golfers can relax at an in-house pub stocked with craft beer and whiskeys. Perhaps their most intriguing change was Abts’ introduction of “FastPlayFriday,” which encourages speedier play and means people don’t have to take a huge chunk of their day to finish a game.

They also haven’t ignored marketing. Their ads are splashed with cheeky slogans that riff on cultural and social memes like “Fairway to heaven” and “Welcome to the real Magic Kingdom.”

It’s not just the daily-rate courses fighting for younger folks.

“The struggle for us and other golf courses is reaching out to juniors,” Minneapolis Golf Club’s Lehmann says.

The club is running clinics and camps to get kids involved in the sport early. Tees have been added in the middle of fairways to help beginners. And the company offers large discounts on dues for those under 40 years old.

“The old blue-blood golf club has come and gone,” he says. “Golf has a totally different face today.” TPC, located on 235 acres in Blaine, is known for hosting the 3M Championship golf tournament.

At the Legends Club in Prior Lake, attracting new and young golfers is a priority. “We run a Junior Golf Academy each summer that fills up every session,” says Jeff Kennedy, golf professional and director of marketing.

“One of our most popular instruction programs is Get Golf Ready,” Kennedy says, which introduces novices and recent beginners to the game. “It is a five-lesson program that gives the participant a backstage pass to the world of golf. They learn how to make tee times, golf course etiquette and golf fundamentals.”

“Golf as a business tool is a bit of a 50- to 60-year-old stereotype,” says the MGA’s W.P. Ryan. “There’s some truth, but it’s mostly a way to solidify relationships.”

Despite that reality, many clubs are chasing the business demographic, which can bring big money.

Cull says about half of the TPC Twin Cities’ 400 members are corporate clients. Because TPC is part of a group of clubs, members have access to golf courses across the country, a point that TPC emphasizes to businesses.

TPC also employs a unique corporate membership that isn’t tied to a single individual. Instead, businesses can assign a designee who holds the membership, with privileges of transferability should the designee leave the company. Even with the designee, other executives have access to the course.

But a club doesn’t need multiple locations to satisfy the corporate crowd.

The Minneapolis Golf Club takes a formal approach. The club also provides top-of-the-line equipment when a member brings a client to golf.

MGC closes its courses on Mondays to offer corporate outings for groups of 80 to 140 people. Executives can get away from the office to mix and mingle while golfing, eating and relaxing. The club hosts roughly 20 such events per season.

Deer Run Golf Club welcomes business executives, but doesn’t specifically market to them, says general manager Abts. “I prefer that they understand and appreciate what we are doing rather than actively court their business,” he says.

MGA’s W.P. Ryan says golf still serves a purpose for many business people. “Golf opens a lot of doors,” he says. “If you’re comfortable negotiating your way around a golf course, that has to help your business career.”

At Legends, Kennedy says, he sees business people who want to “unplug for a few hours and actually make a connection to build a true relationship with clients. There is no better way to do this than on a golf course.”

The Minnesota Golf Association tallied nearly 150 new golf course openings between 1990 and 2006. Since then, at least 18 have shuttered, 11 of which ceased operations in the last four years.

Yet Minnesota is still one of the healthiest states for the game. Golf is a $1.2 billion business here, with $360 million attributable to tourism, according to a report prepared for MGA by SRI International consulting firm.

The National Golf Foundation found that the West North Central region, which covers Minnesota and six other states, tied for first in the nation, with a golf participation rate of 10.2 percent.

While the number of registered MGA golfers has declined in recent years, Tom Ryan, MGA executive director and chief operating officer, argues the narrative of golf’s decline is more nuanced.

“Golf certainly is not going away anywhere — certainly not here in Minnesota,” he says. “We’ll lose a few more courses — some out of the blue, and some that are struggling.”

“What we’re seeing is a real estate story almost more than a golf story,” he says. Indeed, many of the state’s closures have been in or near metropolitan areas where the land on which they sit is a magnet for real estate developers. Country clubs that once stood for more than half a century, like Orono’s Lakeview Golf Course and Shorewood’s Minnetonka Country Club, have lately been turned over to developers who can build 100 or more high-end homes on them, priced anywhere from $400,000 to $1.5 million apiece.

Tom Ryan highlights supply and demand in the golf business: The latter remains healthy while the former appears to be normalizing after years of runaway expansion. For the 2010s, the National Golf Foundation predicted that as many as 1,000 golf courses would close throughout the country, and Ryan observes the industry is on pace to meet that mark. “When you look at the number of courses built, the number of golfers didn’t increase at the same rate,” Ryan says. “There’s still plenty of room and places to play. I think we’re a long ways away from any negative impact.”

One sector, however, does seem to be struggling. Early last year, a 151-page report commissioned by the Minneapolis Park and Recreation Board painted a bleak picture for the park system’s six golf courses.

Golf Convergence, the Colorado-based consultant that prepared the study, noted that rounds played at Minneapolis’ municipal golf courses plummeted more than 46 percent from a 2000 peak of 324,647 rounds played.

Net income for the city’s golf operations also fell, from $1.8 million in 2000 to a loss of more than $532,000 in 2013. The report recommended $34 million in capital improvements, such as addressing drainage issues or “dated and disgusting” clubhouses, to remain competitive with private courses. “If value is not provided to the golfer, every golf enterprise will suffer,” it says.

The report called the park board’s golf department a “failing enterprise” that has “spun into a death spiral,” citing a long deferral of critical and competitive capital investment and a present-day lack of capital. Despite a “fabulous” density of golfers and a market where demand exceeds supply, the report says the Minneapolis Park and Recreation Board is likely to see short-term operational losses.

The City of St. Paul, meanwhile, lost about $1 million in 2013 on the four courses operated through its parks and recreation department, the most recent year for which data is available. Brad Meyer, the department’s public service manager, says the city expected its courses to lose about $400,000 for 2014.

Elsewhere in the state, roughly three dozen golf courses are run by municipalities as segregated enterprises. Of that total, only two earned money in 2013, according to the latest figures released by the Office of the State Auditor. Nearly a dozen—most of which are located in the Twin Cities metro area—lost six-figure sums for operations that year.

Steve Wetzler is the publisher of Tee Times Magazine, a golf digest based in Prescott, Wis., that serves much of the Twin Cities area.

“If you’re just trying to maintain the status quo, every guy or gal that leaves, you’ve got to replace them with someone new,” says Wetzler, assessing the current landscape. “If you want to get rounds up, you have to steal them from another course or introduce someone to the game.”

In a nutshell, he says golf’s challenges are three-fold: It’s an expensive sport, it’s time-consuming and it’s difficult to play. When Tee Times helps market golf courses, Wetzler says he tells staff at the courses that they’re not competing against every course in the Twin Cities — some courses are better suited for beginners, others market to elite-level players. “You can’t try to be everything to everyone. It’s like a restaurant; you need to specialize,” he says.

To address the time issue, in 2013 golf associations and publications began a collaborative campaign called Time For Nine, which helps point golfers to courses that accommodate nine-hole rounds of golf rather than the full round of 18. Another innovation that Wetzler notes is a website called grouplooper.com, a social network that allows users to post times and locations when and where they plan to play, in hopes that friends will sign up to join them.

Tweaks to the game itself also have been bandied about: larger cups for beginners called Big Cup, a game called TopGolf that meshes the appeal of a driving range with accuracy challenges and FootGolf, which blends elements of golf and soccer. FootGolf made its debut at Columbia and Hiawatha golf courses late last season. A Minneapolis Park and Recreation spokeswoman, Robin Smother, says that from its Aug. 4 opening through Labor Day, 648 rounds of FootGolf were played at the courses.

Stephen Montemayor is the online editor and Andre Eggert is an online writer for Twin Cities Business.