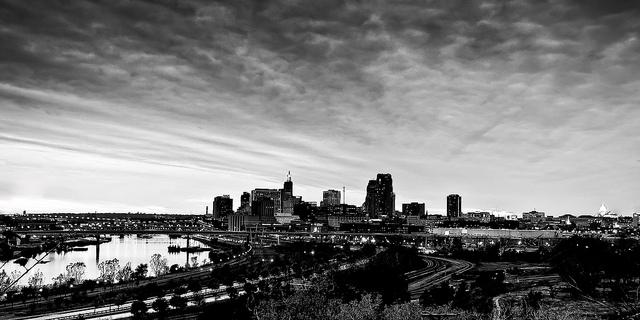 In the Twin Cities, Minneapolis gets the lion’s share of public and media attention. Amid the current real estate building boom, projects underway in downtown Minneapolis include new office buildings and hotels, the football stadium for the Minnesota Vikings and a seemingly endless supply of new apartment units.

St. Paul and the east metro have drawn less notice. While the office vacancy rate in downtown St. Paul remains high, there’s fresh optimism on many fronts. Several hotel projects are being planned, which would mark the first new hotel rooms in downtown St. Paul in decades. A new stadium for the St. Paul Saints, CHS Field, is set to open this spring. The light rail Green Line into downtown St. Paul started service in June.

One of the bigger projects on the horizon is the redevelopment of the Seven Corners Hardware store site, which is near the Xcel Energy Center. Minnetonka-based Opus Development Co. plans to start work this spring on a mixed-use project at the site calling for 190 apartments, a 160-room Hampton Inn & Suites hotel and 11,000 square feet of retail space. The project is scheduled to be complete by early summer 2016.

Matt Rauenhorst, senior director of Opus Development, says that the site is in the heart of the entertainment district.

“It’s really the location that drove the decision. There’s not a lot of competition on West Seventh,” says Rauenhorst, who declines to disclose the overall project budget.

Kitty-corner from that site, Opus and Minneapolis-based Greco also have a tentative developer agreement with the City of St. Paul for a mixed-use project on the 2.4-acre Seven Corners Gateway site, previously known as Cleveland Circle. The site has long been a surface parking lot.

Under their agreement with the city, the development partners have until April 2016 to meet planning benchmarks at the site, according to Jonathan Sage-Martinson, director of St. Paul’s Planning and Economic Development department. The conceptual plan calls for a mix of housing, a hotel and retail space.

“We are actively looking for additional opportunities in St. Paul and the east metro,” says Rauenhorst.

Opus is not alone.

The St. Paul-based Exeter Group is planning an overhaul of the iconic 17-story former post office in downtown St. Paul. The project, Custom House, calls for a mixed use of 202 luxury apartments and a 149-room Hyatt Place hotel.

Bloomington-based Timberland Partners is also investing in downtown St. Paul. The company acquired the vintage Sibley Square at Mears Park office building, with a plan to convert the property into 134 market-rate apartment units. Sibley Square was largely empty, with only 25 percent of the space occupied.

“We like the demographics of Lowertown. We also did our market research. I think that’s a good, stable market. The employment that is in St. Paul has always been very stable,” says Ryan Sailer, vice president of development with Timberland Partners. “It was a market we felt comfortable with.”

Sailer says they hope to start construction on the project, 333 on the Park, in the fall. The building also has the advantage of being skyway-connected. He notes that the building layout is well-suited for an apartment conversion.

“It gives us the opportunity to do fairly large units,” says Sailer. “It’s got very large windows. It will be a great residential property because of that.”

Last fall developer Rich Pakonen of St. Paul-based PAK Properties and Clint Blaiser of the Bloomington-based Halverson & Blaiser Group completed the bulk of the conversion of the Pioneer Endicott buildings into 234 market-rate apartments. By early February, the project was 94 percent leased.

“We’ve always thought downtown St. Paul is an excellent spot to invest,” says Pakonen, who says that the appealing vintage buildings are drawing people from outside of St. Paul as tenants.

He says that he’s surprised that more developers are not drawn to the St. Paul market. “Half of the Twin Cities population lives east of the river. It’s surprising how there’s less competition here,” says Pakonen. “It’s fun to see the changes over here.”

But many of St. Paul’s largest and most-watched sites are also the most challenging properties to redevelop. The former Macy’s in downtown St. Paul closed in 2013. The St. Paul Port Authority, a government economic development agency, acquired it for $3 million in January 2014.

Port Authority president Louis Jambois says that the agency has drawn interest from a wide range of groups looking to reuse and reconfigure the existing property.

In February, the Minnesota Wild surfaced as a potential user for part of the building, which would be renovated for practice facilities. No deal had been finalized by early March. But if one is struck, Jambois says, “The Wild would be one of multiple tenants.”

He hopes to have the Macy’s site occupied by fall 2016. “If we pull off what we’re attempting to do at Macy’s, that’s going to be catalytic,” he says.

“We do have interest in that site,” says Jamie Spencer, vice president of new business development for the Minnesota Wild. “If it can help the city and incorporate the Wild, we think that would be a great solution.”

The former Macy’s store is not the only big site in play in downtown St. Paul.

West Publishing, once a major employer in downtown St. Paul, moved its operations to a campus in Eagan in 1992. (It was bought by Thomson, now Thomson Reuters, in 1996.) The riverfront site long has been regarded as one of the best redevelopment sites in downtown, but like many St. Paul properties it’s been an uphill battle to secure viable projects.

In 2014, the Ramsey County Board approved spending $11.5 million to demolish the buildings on the site, clean up the property and build a retaining wall for the property, which sits on a bluff overlooking the Mississippi River. The county has touted an analysis that shows that the site could support $150 million in new mixed-use development. The timeline calls for completing the site work in spring 2016.

“The first thing we’re doing is trying to make sure it’s shovel-ready,” says Rafael Ortega, a Ramsey County commissioner. “One piece that I think is important for the city of St. Paul and its economic development is that we have a hotel that really complements the Xcel [Energy Center].”

Ortega says that county leaders will defer to the market to see what elements will fit best on the riverfront site, but notes, “We’re not going to sell it just to make a quick deal.”

He says he’s not sure if new office space could be a component on the riverfront site. “I guess it all depends on the market. I am big on the hotel because I keep hearing that,” he adds.

In what could be the biggest deal of the year in downtown St. Paul, New York-based Travelers Cos. Inc. wants to sell its 17-story north tower as it looks to consolidate employees in its south tower. (St. Paul Mayor Chris Coleman announced in his state of the city speech last week that Ecolab will buy the Travelers Tower as its new corporate headquarters.)

When the Saints go marching into downtown St. Paul this year, it opens up the Midway Stadium site, near the State Fairgrounds, for redevelopment. Bloomington-based United Properties and the Port Authority have formed a joint venture to develop 200,000 square feet of industrial space on the site.

Another long-simmering development site is the former Ford plant in the Highland Park neighborhood of St. Paul, an expansive 125-acre site.

Sage-Martinson says that he’s expecting Ford to put the property on the market in the second half of this year. “We’ve seen just really strong interest from developers in the site,” says Sage-Martinson.

The pipeline of apartment and hotel projects in downtown St. Paul translates into more development activity than the area has seen in years. And while the ultimate projects for sites such as Macy’s, West Publishing and the Ford plant aren’t yet known, the sites are better positioned than ever to draw developers. From his vantage point, Jambois is glad to see development moving forward again in St. Paul.

“2008, I think in everyone’s mind, was just miserable. The real estate market just about collapsed. It’s amazing to me how far we’ve come since 2008,” says Jambois. “The housing market is extremely strong, the hospitality market is strong. The industrial market is really strong. If we can produce space, folks are filling it up.”

The most recent market statistics continue the trend. Bloomington-based Cushman & Wakefield/NorthMarq reported the vacancy rate for office space in downtown St. Paul at 23.3 percent at the end of 2014, sharply higher than the overall Twin Cities office vacancy rate of 16.6 percent.

At the moment, no one is floating plans to build a new office building in downtown St. Paul. But despite the high vacancy in the Capital City, brokers say that larger tenants seeking Class A space or companies looking for creative space in the Lowertown area don’t have many options.

“Downtown St. Paul has this perpetual 20 percent vacancy, but the Class A market is actually pretty tight. If you’re a 50,000-square-foot-plus tenant looking for Class A space downtown, I don’t think it exists. The flip side of that is I don’t see enough demand to justify new construction,” says Eric Rapp, vice president with the local office of Colliers International. “The Lowertown area is really tight. If you’re looking for the brick-and-timber feel, it’s really tough to find anything right now.”

Julie Bauch has worked as a broker in downtown St. Paul for eight years. Recent months have been the busiest that she says she’s seen for inquiries from tenants shopping for space. Bauch, CEO of Bauch Enterprises Inc., handles leasing for 180 East Fifth, a large vintage office building in downtown St. Paul.

A confluence of projects—the light rail line and the new ballpark, as well as apartment and hotel projects—are helping create new interest in downtown St. Paul, she says.

“We’ve got a nice mix of what people want to see,” Bauch says.