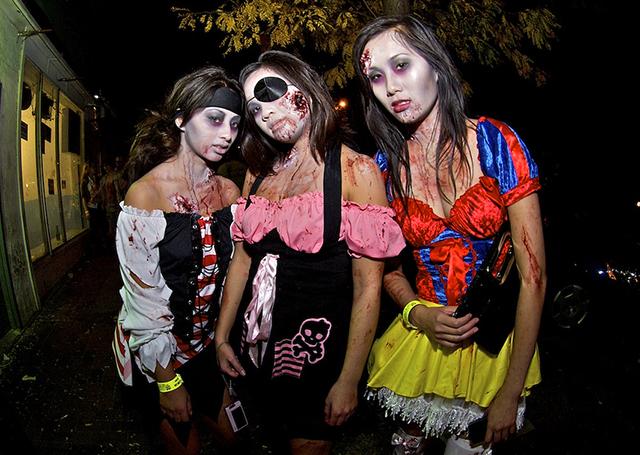 It was 10 years ago this month that I spent my first stint at the headquarters of Intentia International in Danderyd, Sweden, meeting with a group of employees about how best to combine three intranets and about a dozen other sites with those of my employer, Lawson Software, as our two firms merged.

Between the long hours in a conference room with wall-to-wall marker boards sketching out all of the details, we enjoyed getting to know each other. One surprise was how much they were just getting into celebrating Halloween more like Americans. A few asked, “Is it really as popular in America as we hear it is?”

The answer was, of course, yes. And today, I’d have to say, “You wouldn’t believe how huge it has become!” Our day of making fun of death seems to have replaced Thanksgiving as the beginning of America’s holiday shopping season.

Within the last 10 years, average individual spending on Halloween in this country has risen 65 percent, bringing total 2014 spending in stores to $7.4 billion, according to the National Retail Federation (NRF). About $2.5 billion of this went to candy sales, according to the National Confectioners Association. Beyond this are billions more spent on Halloween attractions (haunted houses, theme parks-turned-scary, etc.), zombie pub crawls, parades and other related activities.

And we Minnesotans are largely to thank (or blame) for this.

Anoka started it. “The Halloween Capital of the World,” as proclaimed by Congress in 1937, was the first U.S. city to put on a Halloween celebration, which began in 1920 to divert kids from doing Halloween pranks. Today its family-oriented celebration started on Oct. 9 with a Pumpkin Bowl and includes everything from a children’s art contest to wine tasting, a “Gray Ghost 5K Run” and an Oct. 31 Grand Day Parade. Tens of thousands of people visit, and spend money in Anoka as a result.

More recently, Minneapolis started the national trend of “zombie pub crawls” and holds the Guinness world record for the world’s largest gathering of zombies. What began with only about 150 “zombies” in 2005 has surged into a gathering of 30,000 for a night of pub crawling, dancing and live entertainment. This year’s crawl takes place Oct. 17.

Then there are all of us who get into Halloween at home. For me, it began innocently enough: some pumpkin lights around the fireplace and a motorized skeleton dancing to “Super Freak” to entertain my young children. As they grew older, Halloween advanced as well — more lights and items in the house, but also some tombstones in the yard, a spider web in the doorway. Then the yard morphed into a graveyard with hidden shadow lights, fog machines and more, as the kids started having Halloween parties. Today I admit it’s largely to see how many trick-or-treaters will dare approach our door.

Thus I became one of the 47 percent of American consumers who decorated their homes and yards for Halloween last year, according to NRF data. Nearly three-quarters of Americans handed out candy, while 46 percent dressed in costumes and 33 percent threw a party. All of this generated that $7.4 billion in spending — which is expected to rise this year, as Halloween falls on a Saturday.

‘Halloween is our Christmas’

National specialty chains such as Halloween Express clearly benefit, as do local retailers such as Target and Menards. But it’s really a bonanza for Goodwill-Easter Seals Minnesota.

“Halloween is our Christmas; it’s our biggest time of the year, when many people who don’t regularly come in stop by for costumes, see the rest of our store and hopefully return during other times of the year,” says Mary Beth Casement, Goodwill’s director of insights. Besides used clothes that shoppers can alter for costumes, they also find new accessories and makeup readily available at its 57 Minnesota stores (50 in the metro, which benefit especially from the zombie pub crawl).

The average Halloween spend at Goodwill is between $14 and $25 per customer, and with an estimated 500,000 shoppers coming through its doors in Minnesota this year, Halloween should generate about $9.5 million in sales, according to Ann Marie Courchene, Goodwill’s director of sales and operations in Minnesota.

Minnesota pumpkin growers are another beneficiary. More than 140 sell directly to consumers, while others sell to commercial customers. Pahl’s Market in Apple Valley, for example, provides most of the 10 tons of pumpkins at Valley Fair, which has Halloween to thank for adding another month to its operations. While the theme park used to shut down shortly after Labor Day, eight years ago it extended its season through October with “ValleyScare.”

This year it expects to hire 400 additional people to work as Halloween characters. Along with pumpkins, it will buy more than 400 bales of hay and 15,000 stalks of corn from local farmers to complement 75 fog machines, according to Mat Hehl, PR and communications manager. While attendance numbers are not disclosed, he says crowds have grown each year.

Scream Town: from backyard to cornfield and woods

The same is true for nearby Scream Town, started by Matt Dunn in his parents’ yard; as it grew, it moved to an apple orchard, then to a cornfield and woods in Chaska, its home for the last seven years. While he and a few others work on it part-time in the summer, Scream Town employs about 115 people in October to put on a fun and frightening experience that uses 50 fog machines, 75 sound systems, 75 pneumatic props, creepy sets and buildings, and more.

There’s not enough space here to list all the other Minnesota businesses that benefit from Halloween. While the October holiday still generates only about one-tenth of Christmas sales, it’s fun to see how what began as child’s play has evolved into a multibillion-dollar slice of consumer spending and in turn, job creation.