Jessa Frost calls it the “Cook County shuffle.” She didn’t invent the term, but she and her husband have lived it. It refers to the number of jobs that many residents have to hold down to live in a place they’ve fallen hopelessly in love with.

“There are people who embrace that part of the lifestyle — that they might get the month of April off,” says Frost, who’s now program director for the North House Folk School. Students learn about traditional crafts from the picturesque harborside “campus” in Grand Marais. The shuffle also can be a struggle. “It can make your long-term financial planning a challenge,” Frost adds.

The Frosts have made it work. Jessa holds down a full-time job while her husband — by choice — works as a musician, sells real estate and serves as a ski patrol at Lutsen Mountains, a downhill-ski area.

The Frosts are the type of new residents Cook County wants to attract — educated, entrepreneurial, hardy and artistic. And young. Cook County’s population stagnated between 2000 and 2010. The people who moved there were mostly retirees. Still, there’s at least anecdotal evidence that more young people want to live in Cook County. Like the Frosts, they’re attracted by the area’s beauty, the abundance of outdoor activities and the strong community bond. Long winters? That’s part of the charm — most of the time. Many of the newer young residents have been willing to do the Cook County shuffle to make it work. And with high-speed broadband recently installed throughout the county, many more could be drawn into the dance.

But Frost and others can tell you about something else the county needs to address if it is to grow—finding places for newcomers to live. About five years ago, a number of Cook County leaders decided it was time to address the challenges that this unique part of Minnesota continues to face.

For decades, Cook County’s economy was built mostly upon logging and fishing. Those industries are much smaller these days. But the establishment of the Boundary Waters Canoe Area Wilderness in the 1960s and ’70s helped make the county’s tourism business its dominant industry. In the 1990s, it became a popular destination for retirees and second-home owners.

That boom slowed after 2000. The county’s sparse population, the fact that it has only one incorporated city — Grand Marais — and the self-reliance generally embraced by businesses and residents (most of whom have their own septic and water systems) has created a culture where it has been historically difficult to gather residents together to address countywide challenges.

By 2010, there was a sense among many county leaders that “we weren’t doing very well,” recalls Jim Boyd, executive director of the Cook County Chamber of Commerce. With the school system losing students and the economy growing slowly, there was a strong general push in Cook County to “look hard at our economy and how we can improve it and develop organizations that could help that over time,” Boyd says.

It required the different parts of the county to overcome some long-held distrust and differences, but leaders did come together to form the GO Team, a group of concerned citizens and businesses that drew up a list of economic development priorities.

County leaders spurred formation of a countywide chamber of commerce as well as Visit Cook County MN, which brought together three distinct visitors bureaus in the county. Meanwhile, the county’s moribund economic development agency, whose sole reason for existing was owning and managing Superior National Golf Course near Lutsen, has become far more active. Economic development leaders are making a renewed push to sell lots in a business development park in Grand Marais.

No one doubts that tourism will remain Cook County’s predominant industry. But the county’s business, political and nonprofit leadership also want to diversify the economy. In April and November, the number of visitors slumps; winters also are slower than summers, and many local businesses shut down for weeks, even months. The visitors bureau has established new events for those down times. Economic diversification would further smooth out the peaks and valleys of economic activity.

The GO Team sees particular promise in arts and crafts, which are already established in Cook County. Successful arts businesses there include galleries founded by painter Betsy Bowen and artist/writer Howard Sivertson. The North House Folk School, the Grand Marais Art Colony and public radio station WTIP are among the other solid foundation stones for an arts economy.

Boyd also points to several non-tourism businesses that are flourishing in Cook County. There’s Swanson and Heeren, a Grand Marais law firm that’s one of the largest title processing companies in the state, he says. Another is E.R. Perry Signs and Engraving, which has developed a worldwide market for its plastic signs. A more recently launched example is Voyageur Brewing, which opened its Grand Marais taproom in February 2015 and is now selling its bottled craft beer throughout northern Minnesota.

What’s needed, Boyd says, are ways to market the county “to entrepreneurs who can pretty much locate anywhere.”

A place to live

But where will those entrepreneurs reside? One of the priorities the GO Team identified was housing.

Scott Harrison knows that problem all too well. As president of Lutsen Resort on Lake Superior, one of the oldest and most popular vacation places in Cook County, and a longtime leader of the county’s economic development authority, he has seen tourism businesses struggle to attract and keep talented employees. Many have left area resorts because they had no place to live.

During the 1990s, Harrison says, there was a “dramatic expansion in the number of ‘pillows’ ” — that is, the number of places for tourists to sleep. But that led to another problem — a shortage of local workers. That required area resort owners to attract employees from overseas, and then to make a big investment in employee housing, Harrison says. But “it’s still nowhere near adequate.” 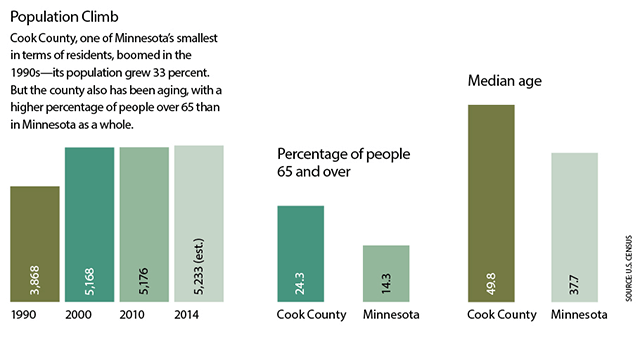 Charles Skinner, co-president and co-owner of Lutsen Mountains, also sees a housing shortage as holding the county back. He’s bullish on the prospects: Skinner has been putting $7 million into upgrades and an expansion at his family’s ski resort, seeing an opportunity to grow the business even as smaller resorts throughout the country have been closing. In order to survive in that marketplace Skinner says, they need to have similar infrastructure as is available in Western resorts such as those in Colorado. Skinner’s goal is “to strengthen the season for all of the properties up here.”

That could mean even more demand for employees and housing. Harrison says that the county is making some progress. There are plans for new owner-occupied housing and rental workforce housing.

But more is needed. “There are zoning areas we have to look at,” Skinner says. “In certain areas, you have to have 20 acres to build a house on.” There aren’t many lots left in Grand Marais. There is enough land elsewhere in the county to build on, he says. “But I’m worried that we’ll squander it” with the county’s current zoning requirements, he adds.

For Cook County boosters, that could mean losing the opportunity to attract younger residents such as the Frosts. “The people who stay are the people who figure out how to buy a house,” Jessa Frost says. The Frosts themselves often talked about leaving, but hung on. In 2013, their perseverance was rewarded when they found a home near Tofte.

“We came because it’s such a beautiful place,” Frost says. “But we stayed because of the people.”