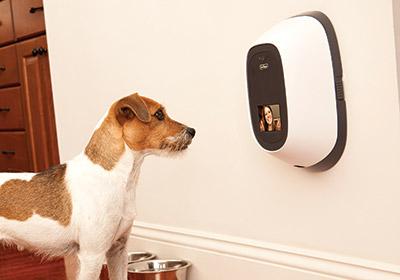 In 2014, after raising nearly $2.5 million, Burnsville-based Anser Innovation brought the first version of PetChatz to market with a test launch. As a device on the cutting edge of contemporary obsessiveness, it allowed pet owners to remote video-chat with their furry family members and also dispense treats and emit scents from virtually anywhere with an Internet connection.

Lisa Lavin, who created PetChatz, admits bringing the product to life was not without its challenges. “Many investors who I’ve pitched to kind of pooh-poohed the idea because they didn’t think it was very sexy or fun,” she says. “To them, PetChatz was kind of silly.”

The company produced a little more than 1,500 units of the original — less than demand warranted, Lavin says — out of a desire to process early customer feedback and refine PetChatz for a future 2.0 release (PetChatz HD).

One of the most popular requests from helicopter pet parents was a feature that allowed dogs and cats to call their owner — now being marketed as a $99 add-on called PawCall. As important, however, was refinement of PetChatz’s recurring revenue model. “Now it’s not only the sale of PetChatz, but also the sale of treats, scent products and accessories,” Lavin says, all of which are sold almost entirely online. Once many thousands of units are in the marketplace, Lavin believes revenue from ancillary items will surpass that of device sales.

No one will ever know what dogs and cats think of the video screens their owners appear on one to 50 times a day, but Lavin seems to have had it right about their owners. To date, thousands of PetChatz units have shipped, and sales are expected to exceed $2.5 million by year’s end, with projections of $10 million in 2017.

And no one should be surprised that off-label uses of the device have begun. According to Lavin, some buyers are eschewing pet interactions in favor of people. “We just delivered PetChatz to a family in Canada whose mom went into hospice and can’t deal with technology anymore,” she says. “So we are not just a one-dog show.”

Yes, there’s a market for video-chatting with your dog