Business leaders throughout Minnesota are the most pessimistic they’ve been about business conditions in this state in more than four and a half years, according to TCB’s Quarterly Economic Indicator survey, completed by 354 respondents in late March.

The percentage of respondents expecting conditions to weaken in the months ahead has increased in the last six consecutive quarters and now stands at 28 percent, more than double from one year ago at this time. The percentage of those expecting conditions to improve (45 percent) also has slipped for six consecutive quarters. Respectively, these are the highest and lowest percentages seen in more than 20 quarters.

Hiring is expected to continue at about the same pace as it has in the last three quarters, with 36 percent of respondents saying they plan to increase headcounts, while 55 percent plan to maintain levels as they are. However, layoffs are ticking upward, with 9 percent now indicating they’ll reduce employment levels, up 66 percent from one year ago at this time and the highest level of anticipated job-cutting since the first quarter of 2013.

Capital expenditures, research and development, and revenues are expected to grow less during the second quarter than they have in recent periods.

Capital expenditure plans are the weakest they have been since the first quarter of 2013. The percentage of respondents who say they plan to increase spending in this area by June 30 (32 percent) is down by 10 percent from a year ago at this time. Meanwhile, the percentage of respondents who plan to cut capital expenditures this quarter (17 percent) is up 44 percent from those who planned to cut back three months ago, and up 72 percent from the second quarter of 2015.

Employee productivity levels are expected to remain about the same as they have been in the past four quarters.

Finding qualified labor also continues to be of high concern among survey takers; 48 percent say they expect it to become even more difficult in the months ahead.

For the biggest business challenge in the next three months, finding—and, increasingly of concern, retaining—good employees topped the list among the 278 written responses. Other responses that hit upon common concerns:

TCB’s survey also gives respondents a chance to mention issues not on the survey. Among them: 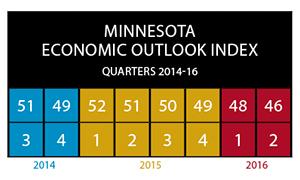 Since mid-2011, Twin Cities Business has sent more than 11,000 business leaders throughout the state the same set of questions every quarter, asking them about plans and expectations for the next three months. This issue’s survey, conducted at the end of March, provides insight about the second quarter of 2016 ending June 30.

Survey responses are used to compile TCB’s Minnesota Economic Outlook Index, which comes in at 46.1 this quarter, below the trailing 19-quarter average of 50.6. An index above 50 indicates healthy business growth; below signals slowing business growth. This indicator has slid downward for four consecutive quarters. 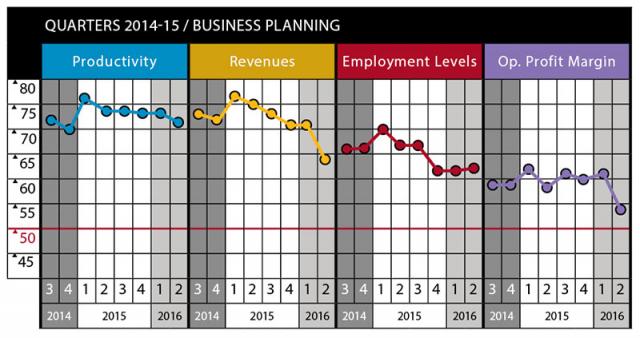 Above, percentage of respondents anticipating increases or improvements in these areas during the second quarter of 2016—diffusion-indexed: for each question, all responses for “increase” added to one-half of responses for “maintain/stay the same.” Above 50 is positive, below is negative. 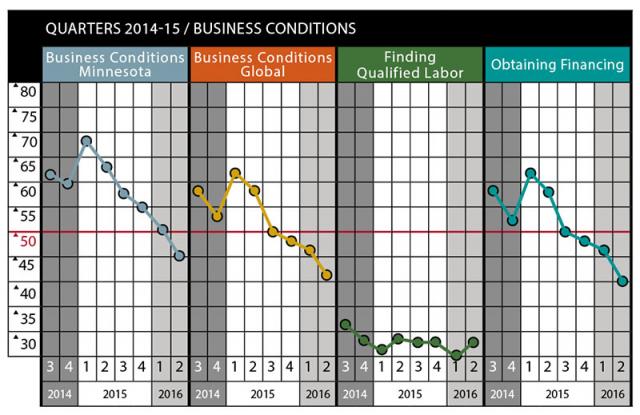 Percent of 354 Minnesota businesses, by industry, that anticipate increases in these areas during the second quarter of 2016: 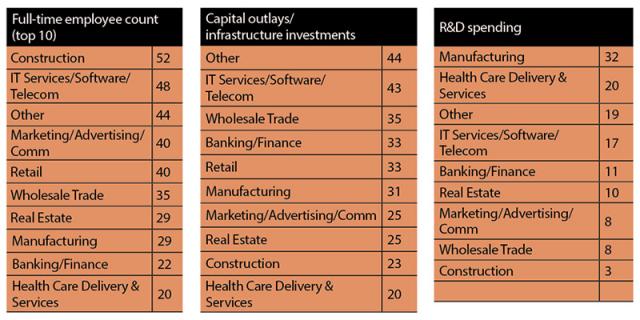 Percent of respondents, by county, that anticipate increases in these areas during the second quarter of 2016: 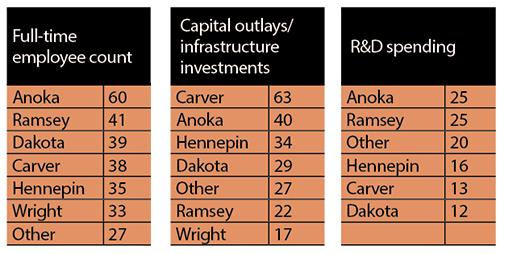 Twin Cities Business conducts its survey quarterly to provide a look at business planning and sentiment among leaders across all industries in Minnesota. An email link to an online survey was sent to 11,772 Minnesota business leaders in late March, and reminder emails were sent the following two weeks to those who had not yet completed the survey. The Minnesota Chamber of Commerce provided some of the email addresses used in this outreach. As of March 31, 354 leaders responded, resulting in a 3 percent net response rate. Of those who responded, 92 percent represented privately held businesses.

Is Minnesota headed for an economic downturn?