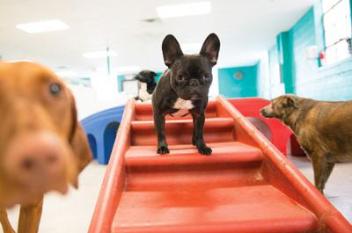 Co-owner Keith Miller says his day care offers an above-average ratio of staff to dogs and services like proprietary reservations software and app, which show vacancies in real time and allow clients to book without having to call or wait for an email confirmation. Miller says the software is also an enormous time-saver for the staff: “Before, we were spending three hours a day responding to emails and putting reservations in.”

When Miller and his wife, Patrycia, opened Pampered Pooch eight years ago, the local dog day care market was burgeoning. Today the market is saturated, they say, particularly in the western and southern suburbs, and franchises like Camp Bow Wow and pet store chains Petco and PetSmart have started to corporatize a niche pioneered by independent owners. “You go to some of the other places, and there are flat-screen TVs in some of the dogs’ rooms,” says Miller. “We’d much rather put money into the staff or new play equipment for the dogs.”

Most dogs attend day care at Pampered Pooch two to three days a week. “We try to talk people out of [coming] every day, only because that becomes hard on the dog,” says Miller, who notes that as a larger day care, Pampered Pooch is best suited to active, playful pups.

Dogs can play in one of three rooms based on the dog’s size, from 6:30 a.m. to 7 p.m. Those who stay overnight sleep in the same rooms they play in, so as not to introduce new sounds or smells at bedtime.

While 60 percent of Pampered Pooch’s revenue comes from overnight stays, which are typically multiple nights, Miller says having the day care helps build overnight bookings. The biggest risk for dog day cares is injury. To that end, Pampered Pooch doesn’t allow “bully breeds,” such as pit bulls and chow chows, in part because its workers’ compensation insurance premium would triple if it did.

But, bully breeds or not, fights are inevitable. “It’s like kids,” says Miller. “You see one dog picking on another dog, well, eventually somebody’s going to snap. So it’s trying to manage that, and I think that comes down to having enough people in the rooms to do it.” It also means occasionally having to kick out dogs that show aggression.

While Minnesota doesn’t regulate dog day cares, Pampered Pooch is a member of the Twin Cities Dog Daycare Association, a group of independent day cares working to set standards of care locally by following the regulations currently in place in other states.

After researching a second location, the Millers thought it might cannibalize business at the original. So to diversify and expand, in 2011 they started the dog-wash chain Bubbly Paws, which has now grown to three locations.