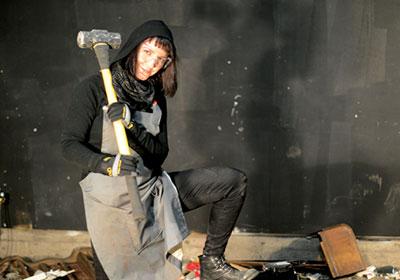 Rather than performing yoga or pouring a cold one, Theresa Purcell has long taken a more destructive approach to blowing off some steam. Since 2001, when she began attending the University of Minnesota, stress relief often came in the form of pulverizing old tube TVs or dinnerware with a sledgehammer.

“I was a pretty strait-laced kid, but also an angry kid,” she says, “so I’d smash the hell out of whatever, and it’d feel incredible.” A decade and a half later, Purcell quit her job at internet marketing agency Irish Titan to offer aggressive stress relief for a price.

At her soon-to-open store, the Break Room (breakroommn.com), discarded chairs ($15), inkjet printers small and large ($15 to $45), stacks of plates ($5) and more meet the same shattering fate. Even cars ($250 and up) are on offer. If spring cleaning has uncovered a box of unwanted breakables, $10 and a booking fee let you smash it in her space. “Although that doesn’t necessarily mean you can come wheel your old refrigerator in on a dolly,” she adds.

Purcell isn’t a pioneer of the “you buy it, you break it” business. Sarah’s Smash Shack in San Diego (now defunct) was the first to try it in 2008. Later attempts, such as the Anger Room in Dallas or The Smash Shack in Jacksonville, N.C., have managed to stay afloat off of people’s wild side. The Break Room will open in St. Paul’s Midway neighborhood this summer as part of a franchise agreement with the Rage Room, a similar operation in Toronto. “For a one-time franchise fee [of $500],” Purcell says, “they’re going to help me promote, be there for startup advice, legal advice and get me through the hiccups and growing pains.”

Partnerships with thrift store Arc’s Value Village in Brooklyn Center and St. Paul electronics recycler Tech Dump are providing Purcell a no-cost supply line to a deep reservoir of junk. She even has plans to take the Break Room to downtown Minneapolis in the style of a food truck.

“That way, people can come down from their desk and pay for 5 to 10 minutes of smashing,” she says. Even though Minnesotans are legendary for being passive-aggressive and keeping a tight lid on negative feelings, Purcell is confident her business will find plenty of takers. “I don’t claim that this is therapy or a way to release your aggression,” she says. “It’s just fun.”