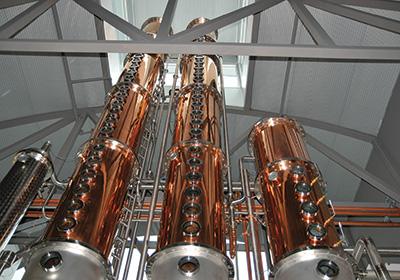 The concept of farm-to-table is so common locally that it’s almost passé. Now, a local distillery is introducing a new spin on that take: grain-to-glass.

Waconia-based J. Carver Distillery is all about producing craft spirits, but it’s also all about the local community, sourcing its barrels from local cooperages and ingredients from local farms. Plus, the milling, mashing, distilling and aging is done on-site. “We want to keep putting Minnesota on the map and grow the economy, while supporting our business partners out in the market,” explains Gina Holman, J. Carver founding partner.

“J. Carver’s vodka has a distinct flavor and it’s very creamy, unlike ‘big brand’ vodkas,” says Spoon and Stable’s head bartender, Robb Jones. “I want a spirit to stand out in cocktails. I want to use it for a reason, not just use it because it’s alcohol.”

The distillery’s barrel program allows restaurants and liquor store patrons to hand-select smaller barrels of J. Carver’s bourbon whiskey, rye whiskey and barrel gin. Less than two years since they began distilling, J. Carver’s spirits can be found in 480 locations throughout Minnesota, including Haskell’s, Marvel Bar and MOA’s Radisson Blu. As the local craft-beer boom peaks, the craft spirit market is beginning to take off. J. Carver is one of 14 micro-distilleries in Minnesota that has opened between 2012 and 2015. (Seven more are in development, says Holman.)

Holman, who is also vice president of the Minnesota Distillers Guild, attributes the rise of micro-distilleries to provisions in the “Surly” legislation that facilitated tap rooms. One component of the law lowered the distiller’s license fee from $30,000 to $1,000. Also, in 2014, the omnibus alcohol bill, which J. Carver helped craft, gave distillers permission to serve craft cocktails made with their own spirits. Given 20 percent of J. Carver revenue comes from its cocktail room and another 20 percent from liquor sold on-site (200 to 300 people visit each weekend), recent law changes have been crucial to J. Carver’s business model.