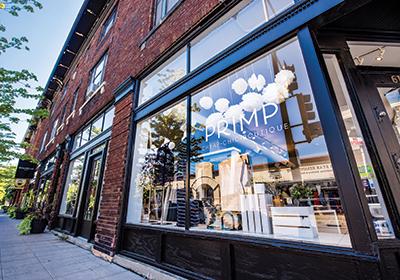 Courtesy of Twin Cities Business/Travis Anderson
Primp’s first location at Selby and Dale in St. Paul proved the viability of a boutique experience with a budget price point.

Primp Boutique is the envy of major shopping malls for its ability to draw elusive millennials to its seven stores from St. Paul to Excelsior — creating a community most retail chains lack, while moving copious amounts of contemporary women’s apparel, all priced under $100.

Shopping centers regularly try to roll out the red carpet for the Minneapolis-based mini-chain, and owners Michele Henry and Wesley Uthus have considered Mall of America, Galleria, Ridgedale Center and top malls out of state. But when they decided last fall to open their first store beyond the metro area, they chose downtown Rochester. This summer, they’re opening two more stores in less-than-obvious locations: Mankato and Sioux Falls, S.D.

“We could do 15 mall stores,” Uthus says. “But our customer isn’t typically in a mall. She wants a boutique experience. That might mean there’s a line for the fitting room, but you know there’s going to be a mimosa while you wait.”

The latest openings will take Primp to nine stores, with a total of 75 employees. Henry and Uthus, who have no outside investors, expect to top $6 million in sales this year.

Retail expert Beth Perro-Jarvis of Ginger Consulting calls it the blue ocean strategy—swim away from the competition—and compares Primp to Duluth-based Maurices, which has more than 900 stores, mostly in secondary markets.

“If I were a new brand, I’d think twice about opening at a mall,” says Perro-Jarvis’ consulting partner Mary Van Note. “Malls are not going to give me what they used to give businesses in the early ’90s: guaranteed traffic. It’s a better idea to zig while everyone else zags. Go to the small towns where it’s easy to park, everyone drives by and sees your store, and you don’t have to pay mall rent.”

To doubters who wonder if Primp could cut it against more seasoned competitors at a mall, Henry points out that Primp does have two lifestyle-center locations, at Woodbury Lakes and at Shops at West End in St. Louis Park, where the store is next door to Anthropologie.

“We do better per square foot than a lot of the nationals,” Henry says, but declined to reveal exact numbers.

Primp’s focus on secondary markets began by accident, with its first store at the corner of Selby and Dale in St. Paul. “We wanted Grand Avenue, but couldn’t afford it,” Henry says. “It turned out to be a happy accident.”

Henry and Uthus cobbled together $16,000 to open Primp in 2010. They stretched it to cover rent, scant furnishings for the store (the truth behind their minimalist chic?), and merchandise. They made back their investment in five days and never stopped. Each new store has opened with profits from the last. Henry and Uthus say the company is debt-free.

The two met in 2003 as design students — Uthus at the University of Minnesota and Henry at St. Catherine University and the University of St. Thomas. In 2009, they teamed up to design handbags. They were wholesaling their bags when the idea for Primp hit them: As young professionals, they were ready, style-wise, to graduate from fast-fashion chain stores, but they couldn’t afford most boutiques. Their instant success at Selby/Dale showed the founders that with the right merchandise and a compelling experience, consumers would find them. Their concept is a full-service boutique experience on a Forever 21 budget.

The Selby/Dale store was designed in clear contrast to mall chains. It was bright and airy, with big windows, a city loft-type vibe and plenty of space between racks. It felt more sophisticated, and intimate, than Forever 21 did, but with prices that made sense to college students and young professionals.

“They’ve created a small, upscale boutique experience, with a really screaming good price point,” Van Note says. “Millennials like that focus; you do what you do well.”

Since Primp proved that a small independent retailer could survive on $30 blouses and $50 dresses, a spate of stores has followed suit: Proper & Prim in Minneapolis and Fargo, Sisu in Woodbury, Kittsona at Shops at West End.

And despite their attachment to their phones, studies show that shoppers in their 20s and early 30s do frequent bricks and mortar stores—not out of necessity, but in search of an experience. “Shopping is still fun to do,” Perro-Jarvis says. “It’s social, you get that rush of good feeling. Primp has created a cool, neighborhood experience. It’s not the Gap.”

Each Primp store is slightly different in design, which fosters a sense of intimacy. Targeting secondary markets and city locations also helps Primp avoid getting caught in the clutter. “We never open a store just to open it,” Uthus says. “We’re always thinking: Where do they need us?” 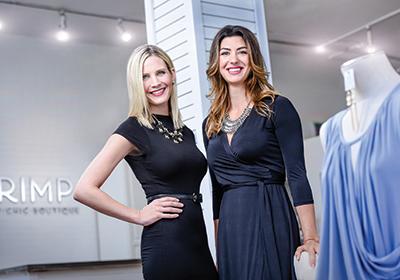 The answer this summer: Mankato.

“Our downtown is a changing area,” says Kyle Smith of the Mankato-based development group Tailwind. “Historically, it’s been office or entertainment. We’re hoping Primp can pioneer the boutique opportunity and give the professional crowd a reason to come here during the day.”

Henry and Uthus noted the redevelopment happening on Front Street in Mankato, and liked the idea of getting in early. It’s a similar story on Phillips Avenue in Sioux Falls, where the city center is undergoing revitalization, but has no retailers like Primp.

Rochester, in contrast, has a bustling downtown with a daytime population of more than 130,000, but not a lot of affordable clothing options for students and young professionals. Primp landed a high-profile spot on the corner of Peace Plaza, near a University of Minnesota satellite campus and Mayo Clinic.

The strengths and challenges of the Rochester store were evident with its very first sale. That first customer spent $800—but she was from Tennessee. Given the 1.3 million people who flock to Rochester every year to go to Mayo, it’s proving harder to build local clientele there, which has been so critical to Primp’s success. “On the flip side,” says Henry, “there aren’t as many returns.”

Primp does not sell online — yet. E-commerce has been challenging, since Primp tends to buy in small batches, often from vendors without much brand recognition, then sell through it quickly. But the boutique chain has built a robust social media audience—more than 48,000 Facebook fans, 20,000 on Instagram—and they are perfectly willing to call the store when they see Primp post photos of new arrivals. It’s not uncommon for items to be totally spoken for before they hit the sales floor.

Primp plans to launch an online store by the end of the year. The owners will closely track where orders come from to help map out their expansion plans. They’re already looking westward—to Denver, in particular, which is similar to the Twin Cities in size and makeup.

Too big for hands-on?

The biggest challenge for Henry and Uthus, as their business continues to expand, is management—both their growing staff and their own responsibilities to the company. The two still do all the buying and go out of their way to find American-made lines that fall within their price point. It’s not easy, but not as difficult as some higher-priced retailers suggest. Henry and Uthus even design a line of Minnesota-themed T-shirts and tanks that keeps selling out at Primp stores. They also design their own ready-to-wear brand, Henry Martin, which is exclusive to Primp, as a way to distinguish themselves from the competition.

2009 – The two launch a handbag collection called Rapport, but quickly shift their thinking from wholesale to retail.

2014 – Two stores open: 48th and Chicago in Minneapolis and Excelsior.

“We’ve seriously looked into franchising in the last year,” Henry says. “But we don’t want to give up control.” A key to creating an intimate store environment—where customers enjoy gathering for happy hours and stop in weekly to gab with staff as much as to see new arrivals—has been hiring employees who are passionate about Primp and seasoned in customer service.

But it’s tough to keep tabs on employees in locations more than an hour away from Primp headquarters in northeast Minneapolis. Henry and Uthus do their best to make managers outside of the Twin Cities feel included by checking in regularly and doing weekly video chats. But the two are aware that they are approaching a size where it’s going to be difficult to remain as hands-on. And they’re OK with that.

“As long as the market demands it, we will continue to open stores,” says Henry, who recently helped her brother and a partner open John Henry, a similar concept for men, next door to the Primp store in downtown White Bear Lake. “We love the local downtown areas and definitely see our concept working in many markets outside of the Midwest.”