A drive on just about any Minnesota highway reveals dozens of “Now hiring” signs from desperate employers, some offering hundreds of dollars in signing bonuses. Manufacturers, restaurant chains, agribusinesses, and health care organizations are among the many companies that say they’re in dire need of workers. In the Twin Cities, “Help Wanted” signs hang from windows of independent restaurants, cafés, auto repair shops, and countless other businesses.

It’s a remarkable about-face from a year ago, when government-mandated shutdowns and a temporarily contracted economy forced many Minnesotans out of work. It’s also a phenomenon that has produced headline after headline about the ongoing worker shortage, in Minnesota and nationally. “Millions are unemployed,” read a May 6 headline in The Wall Street Journal. “Why can’t companies find workers?”

It’s a complex situation, but not entirely unfamiliar in a state where, only a couple years ago, labor shortages were common. The current shortage is affecting virtually every part of the region, from the seven-county Twin Cities metro to the farthest reaches of Greater Minnesota. What’s notable about this worker shortage is the lack of clarity over what’s driving it, and how much of it is a temporary phenomenon of the pandemic and how much is structural.

Some have argued that extended unemployment insurance benefits are keeping workers on the sidelines. Others theorize that people won’t return to work because they provide child care in the absence of in-person school. Still others say the pandemic has prompted workers to take higher-paying jobs in more stable industries.

In a mid-April news conference, Minnesota Department of Employment and Economic Development (DEED) Commissioner Steve Grove suggested fear of the pandemic was a primary reason workers were staying home.

“With the variants being the predominant strain out there now,” he said, “I think there is still some tentativeness about getting back to in-person workplaces, and certainly the unemployment insurance benefits make it at least more palatable not to [return] for some workers.”

Déjà vu all over again

Minnesota had 127,300 job vacancies in fourth-quarter 2020, only 236 fewer than the same quarter a year before. In a news release, DEED officials spelled out the situation: “Part of the reason for the quick return to a tight labor market is that some workers have dropped out of the labor force over the past year,” they said. “To have a tight labor market during a recessionary period is unique.”

While analysts and pundits debate the precise reasons for that drop, local companies have begun retooling their compensation packages and rethinking recruitment efforts. For some, that’s involved boosting wages and benefits. Others are tapping into populations that are often overlooked for jobs, such as people with criminal backgrounds or disabilities.

In Owatonna, Bushel Boy Farms is emblematic of the broader challenges facing rural employers. Between its operations in Minnesota and Mason City, Iowa, the indoor tomato grower has a total headcount of around 150. About 100 of those employees work at the company’s Owatonna facility, the rest in Mason City. Most of those employees are general crop workers.

Bushel Boy president Chuck Tryon says it’s been a challenge to maintain adequate staffing levels. “It’s not unusual for us, on any given day, to be actively trying to hire five to 10 people at each of our two sites,” he says.

Bushel Boy competes for employees with several other local manufacturers and warehousing companies. Plus, as COVID restrictions continue to ease in Minnesota, bars and restaurants are ramping up their own hiring and poaching would-be employees. “At this moment, basically everyone is hiring,” Tryon says. “There are some companies that are very healthy in the manufacturing sector, and that’s fabulous. But it’s really putting a strain on the available labor.”

When new worker applications do come in, Bushel Boy managers have to move fast. Applicants are generally considering multiple opportunities at the same time. In many cases, by the time the company invites a candidate in for an interview, they’ve already landed another job. In the past, Bushel Boy had specific days set aside for interviews. Now, the company aims to line up interviews every day, Tryon says. “We can’t afford to have someone have an interest and not try to get them in immediately.”

It’s worth noting that for many companies in rural Minnesota, worker shortages long predated the COVID-19 pandemic. According to DEED data, job vacancy rates in greater Minnesota have been growing since at least 2008.

We talk about a workforce shortage, but [that discussion is] really kind of centered around all the opportunities in the seven-county metro,” says Kelly Asche, research associate with the Center for Rural Policy and Development, headquartered in Mankato. “[Greater Minnesota is] seeing higher job vacancy rates than the seven-county metro.”

Rural Minnesota has serious structural problems maintaining a stable workforce. “In rural areas, the worker shortage is both demographics and economics,” Asche says. “We have significant economic growth in rural Minnesota that we don’t get enough credit for. But, as well, we have an older workforce, and a lot of them are retiring faster than they are in the seven-county metro.”

Whatever the differences between rural and urban unemployment, all regions reported the most unemployment claims in the food preparation sector, i.e., restaurants and bars.

Mike Brown, owner of Travail Kitchen in Robbinsdale, says prospective applicants are harder to come by. Even with higher wages and benefits, the company still struggles. A recent online posting for a prep cook at Travail’s Pig Ate My Pizza in Robbinsdale called for a starting wage between $13 and $18 an hour, depending on experience. The job includes benefits.

“If you were to post an [online] ad looking for cooks or any other restaurant-related positions, you might get one or two responses,” Brown says.

But it’s not just a lack of back-of-house workers; it’s getting harder to staff managerial positions, too. Randy Stanley, owner of 6Smith in Wayzata and Baldamar in Roseville, says he’s having trouble finding workers “across the board.”

“Trying to find experienced and committed people is very difficult right now,” he says. “What we’re finding is that most of the people that are available right now are more inexperienced.”

The hospitality industry (hotels, restaurants, bars) was among the hardest hit early in the pandemic. And the industry hasn’t fully recovered all the jobs lost during the pandemic. According to DEED, there were 268,600 jobs in the hospitality and leisure sector in March 2020; by April 2021, the state counted 217,500 jobs. 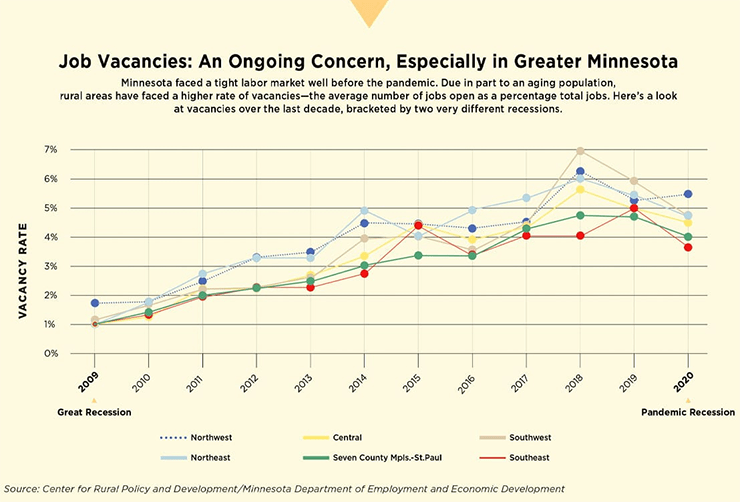 Like dozens of other employers, Brown is reevaluating his recruitment process. He’s working to find a new generation of folks actively interested in jobs in the restaurant industry. He’s rolling out a program he calls the Travail Young Chef Training Program, which pays high school graduates $16 an hour and teaches them all the skills they need for a career in the restaurant industry.

“It looks like we need a new generation of hospitality folks,” Brown says. “Let’s make it something that they want to do.”

But what if that doesn’t work? What if, despite programs like these, despite higher wages and benefits, restaurants still can’t get folks to sign on?

For some eateries, the business model could eventually change entirely. Some restaurants have already embraced a counter service model, rather than traditional “high-touch” service, says 6Smith’s Stanley.

“Our industry in particular is trying to figure out ways to minimize the number of employees — not to intentionally eliminate employees, but as a matter of need and desperation,” he says. He believes the lack of labor is starting to affect new restaurants in the planning stages, in favor of low-staffing concepts and against full-service restaurants.