News
Two Cities
This coverage is made possible by a grant from The Saint Paul Foundation.
Oct. 26, 2011 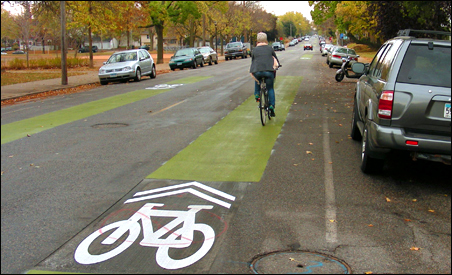 MinnPost photo by Karen Boros
Minneapolis bike riders are about to achieve a new status — official members of “traffic.”

Minneapolis bike riders are about to achieve the same status as herded animals and people who drive cars. This new development is not designed to humiliate bikers but to elevate them to official members of “traffic.”

Traffic is currently defined by a city ordinance as “pedestrians, ridden or herded animals, vehicles and other conveyances either singly or together while using any street or highway for the purposes of travel.”

The words “including bicycles” were added to the ordinance Monday by the Regulatory, Energy & Environmental Committee of the Minneapolis City Council.

The change in wording would allow ticketing of drivers who park in bike lanes or fail to yield the right of way to a bike rider. Under current city law, a motorist can’t be ticketed for obstructing traffic if the obstructed bike or rider is not officially traffic. Got that?

“Our city was built for streetcars and modified for automobiles,” says Council Member Gary Schiff, himself a long-distance biker and a force behind the new definition for those who pedal. “Bikes were not planned as part of the infrastructure of our streets or parks.”

City doubles on-street bike lanes
This year, Minneapolis has nearly doubled the miles of bike lanes on city streets from 45 miles at the start of the year to 70 or 80 miles expected by year’s end. The 2010 U.S. Census reports 7,500 Minneapolis residents who say they bike to and from work year-round. That’s about 3.5 percent of the city’s daily commuters. 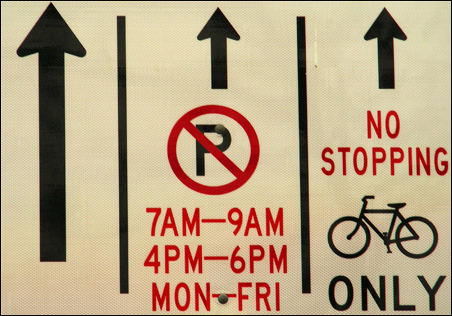 MinnPost photo by Karen Boros
“Our city was built for streetcars and modified for automobiles,” says Council Member Gary Schiff, himself a long-distance biker.

Minneapolis’ proposed re-definition of traffic also changes the status of bike lanes. They no longer would be just green paths but would become official lanes of traffic: Park your car or delivery truck in a bike lane, and it would be just the same as parking in the middle of the street.

“This is a step toward getting more responsibility for bike lanes,” says Shaun Murphy, the city’s Non-motorized Transportation Pilot Project coordinator, a position partially funded by a federal grant.

The biggest problem area where cars and trucks are most likely to block bike lanes are downtown or at the University of Minnesota, he said.

Minneapolis bicyclists Bob Hain and Hokan, who goes by only one name, think the change is unnecessary and will probably not make their bike travels safer.

“We’re bound [now] by the same rules as any other traffic on the road,” says Hain, adding, “We have the same rights as any traffic.”

Both Hain and Hokan say the views of John Forester, who wrote the book “Effective Cycling,” guide them. Forester says, “Bicyclists fare best when they act and are treated as drivers of vehicles.”

The bike lanes themselves are becoming easier to spot. On Bryant Avenue South and along Hennepin, for example, the bike lanes are being painted pea green with a prominent symbol of a biker several times each block. Where curbside parking is allowed, the lanes run between parked cars and moving traffic — the look of the future, according to Schiff.

(St. Paul is currently working on plans to make four miles of Jefferson Avenue into a major bike artery that may — or may not – end up similar to Bryant Avenue in Minneapolis. The St. Paul plan, however, has run into strong community opposition. Erickson says officials are working with the community and hope to approve plans in time for street work to be done next spring.)

In Minneapolis, “We need to switch to a system that encourages and accommodates bikes as transportation” says Schiff.

City streets in the ’50s and ’60s were designed for cars, Schiff notes, but now when streets are rebuilt, they will need to accommodate cars, bikes and pedestrians. They also will need parking to serve the needs of small businesses.

Bikers must follow rules, too
The possibility of increased policing of the bike lanes apparently would not translate into more tickets for bike riders. Schiff says any biker who runs a red light can now get a ticket, just like any driver. And more tickets for bikers are not the purpose; rather, the language change is designed to put more muscle into keeping the bike lanes open and safe.

“It’s a tool in the tool box,” says Murphy about the possibility of increased tickets for bikers but notes that decision is up to the Minneapolis Police Department. Murphy says bikers must follow the traffic laws that apply to vehicles — and a few more that apply to bikers only.

Bikers are not allowed to ride on sidewalks in business districts and cannot ride three abreast on the street. To make it even more confusing, Park Board trails are covered by Park Board rules that set a speed limit in some areas.

The policing aspect of bike transportation has Schiff’s attention because of the increase in crimes against bikers. In the last two years, the number of violent crimes committed against someone riding a bike has increased dramatically. Recently, a biker was beaten with a baseball bat near the Lake Street light rail station. A suspect in that case is now in jail.

This spring, Minneapolis will have three years of data on crimes against bikers that will help focus a new bike safety imitative. 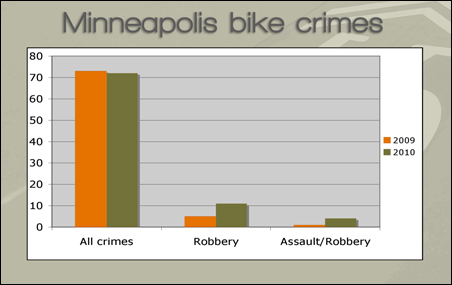 Information courtesy of Minneapolis Police Department
Aggravated robbery of bikers, which tends to involve assault, rose from one case in 2009 to four in 2010.

The goal, Schiff says, is to make Minneapolis “a city that recognizes bikes as a source of transportation, not as recreation.”

So soon, we may have bikers and herded animals and drivers all officially considered part of traffic in Minneapolis. We could probably drop the “herded animals” language in the big city, but if we did, we would be in conflict with the state statute that defines traffic. And you never know when you might encounter some herded animals.