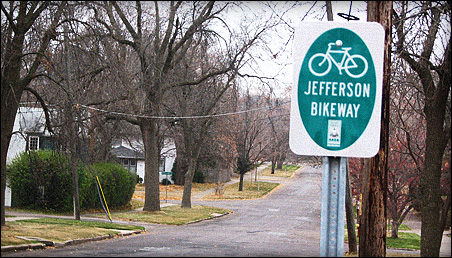 MinnPost photo by Joe Kimball
Bike activists say Jefferson Avenue is a perfect route to connect with other bikeways.

Most bicycles are hung in the garage after Saturday’s snow, but there’ll be plenty of heated bike action next month in St. Paul when the city holds three meetings in another attempt to get community consensus on a bikeway along Jefferson Avenue.

Jefferson is a prime target for bike activists who say the residential street that runs east-west for four miles between a loop in the Mississippi River is a perfect route to connect with other bikeways in Minneapolis and St. Paul.

The residential Jefferson street runs from Mississippi River Boulevard on the west, where you can look across the river into south Minneapolis, to the St. Paul Schools headquarters building on the east, not far from the High Bridge that crosses the river. Jefferson is just four blocks north of the busier, more commercial Randolph Avenue, which gets a much higher share of motorized traffic.

But changing Jefferson into a real bikeway (or bike boulevard or bike/walk street) has turned into a long-running dispute, with a vocal group of neighbors worried that proposed changes will cause safety issues for their families.

The December meetings are an attempt to bring some resolution to what newly elected City Council member Chris Tolbert calls “one of the most divisive issues” he found while campaigning this fall in the neighborhood.

Probably the biggest sticking point: a diverter on Cleveland Avenue at Jefferson — a median that wouldn’t allow left turns onto Jefferson — as a way, in theory, to make it easier for bikers and walkers to cross the intersection and use the street. But a test of the diverter caused much angst for many neighbors, who said cars were speeding down neighboring streets and alleys as drivers sought alternates routes when they couldn’t make the blocked turn.

The city says the diverter is now off the table — although some of the concerned neighbors aren’t sure they believe that — and now the challenge is to find others ways to slow traffic on the street, or risk losing the $750,000 in federal funding that’s been set aside for the bikeway.

The dilemma is linked to the city’s successful application for the federal grant to build the Jefferson bikeway; part of the proposal included having some of those “traffic-calming” measures on the roadway.

But earlier community meetings have already shown a dislike for such potential calming proposals as round-abouts and speed humps, so with the pointed opposition to the diverter, too, it’s clear that there’s still a big gulf to bridge.

Meanwhile, the Transit for Liveable Communities nonprofit group, which is administering the federal grant, has watched the city miss deadlines the past few years, and is keeping a close eye on the city’s progress to reach a consensus and approve the project. So far, though, it has not given the city a drop-dead date to use the money or lose it, said Joan Pasiuk, director of TLC’s Bike Walk Twin Cities, which oversees the funds.

“We’ve conveyed to city officials all along that if they are not able to fulfill the requirements [some traffic-calming elements], they can still develop Jefferson, but to use these funds, they’ll need to meet the criteria.”

[Update: The neighborhood group opposing the project points out that Pasiuk, who works for TLC heading up the bikeway effort, is a bike enthusiast who lives on Jefferson, and therefore has a conflict of interest on the issue, which they say, hasn’t been properly disclosed.

[“All funded projects are managed by the implementing authority. In the case of Jefferson, the project is managed by the City of St. Paul. I direct the entire program that has funded 37 capital projects, 8 planning studies, five education projects, an ongoing measurement project, numerous contracts to support communications work, and staff effort in all areas. My job is to oversee resources of all aspects of our program to achieve best outcomes related to program goals. All project award decisions were made the the TLC board, with input from the Bike Walk Advisory Committee and technical scores from a panel of experts. Staff also provided recommendations to the board; I participated in this process in all cases except for the Jefferson project, removing myself from any relevant staff meetings prior to the award decision.”]

Some bike/traffic improvements have already been made on the eastern part of Jefferson — and paid for by the city, not by the federal money . They include:

Now the city wants to want get going on its plan for the western section of the road. 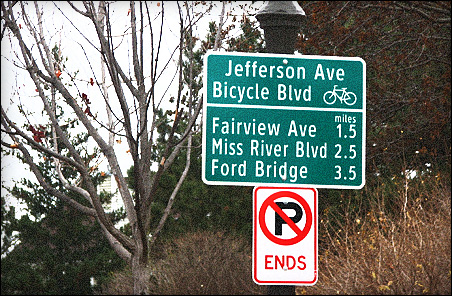 MinnPost photo by Joe Kimball
Incoming Council Member Chris Tolbert said some neighbors see the Jefferson project “as a solution without a problem, and a waste of government money.”

Neighborhood worries
A neighborhood group has emerged to oppose many aspects of the western Jefferson plan, particularly that diverter at Cleveland. The Local Taxpayers for a Liveable Community neighborhood group has pushed hard on the issue and sent a letter to Mayor Chris Coleman earlier this month, saying that they’re interested in “protecting our neighborhood streets for pedestrians, bicyclists and drivers throughout Ward Three.”

But they don’t want the diverter and don’t like the current process.

“While we fundamentally reject the philosophy that comes with the “use it or lose it” approach that has dogged this project from the beginning, we have come to realize the City intends to spend this money despite taxpayer objections,” said the letter, signed by the group’s leadership, including Erich Mische, who was once a top aide to former Mayor Norm Coleman.

Clare Bluhm, a spokesman for the group, said she fears the diverter may return in a later city plan, and her group is adamantly opposed to that.

During the test in 2010, cars seeking alternate routes would speed past her street and in her alley where her young child plays, she said.

“We’re not anti-bike or anti-bikeway,” she said. “More than half the members of our group are regular bikers. But we feel this has become more of a political thing, and they’re making it look like we’re not progressive and against increasing biking. But it’s a common-sense thing.

“Cars already go slow on the street; it’s narrow and bikers regularly use it. It doesn’t make sense to spend extra money there on a forced project.”

Incoming Council Member Tolbert said some neighbors see the Jefferson project “as a solution without a problem, and a waste of government money.”

The neighborhood group does say it supports better striping of crosswalks in the area, more police presence at intersections to enforce crosswalk laws, and more digital speed signs to encourage motorists to slow down.

Public meetings set
Trying to keep the bikeway process on track, city officials last week scheduled the three December meetings to review potential traffic-calming treatments on Jefferson. The goal is to get community consensus on some improvements that can be made at various points of the proposed bikeway, fulfill the application requirements and free up the federal money.

After the meetings, city staff will take the ideas and produce a preliminary design proposal, said Emily Erickson, the city’s sustainable transportation planner.

The city’s goal, she said, is to find ways to make the streets safer for bikes, pedestrians and cars, while improving ways for people to get around on bikes and on foot.

Disagreements and misunderstandings have slowed the process on this project, even after 16 or 17 public meetings, she said. “People don’t want to be told what their street is going to look like; they want to have input,” Erickson said.

From the neighbors’ perspective, there’s still some distrust of the TLC group’s intentions for remaking Jefferson. Mische wrote this in an op-ed piece in the Highland Villager this fall:

Transit for Livable Communities (TLC), which was founded in 1996, seeks to “reform” Minnesota’s transportation system by offering more of a “balance” between motorized and nonmotorized vehicles. It’s a worthy goal, and one I embrace as a private citizen, a parent and someone who has approached middle age believing that the more I engage in physical activity, the better.

But my agreement with TLC’s goals stops there. I object to this organization’s ends-justify-the-means mentality, its methods and tactics, and the process that has led to a neighborhood being forced to accept a project it never requested — a process that has our own tax dollars being used against us by an organization that is unelected.

But TLC’s Pasiuk says the St. Paul community, as a whole, appears eager to secure the federal funds for the Jefferson east-west bikeway, with the links to Minneapolis and St. Paul bike routes and connections with schools, community centers, playgrounds and commercial areas.

Tolbert says he’s siding with the neighbors against the diverter, as did his predecessor, Pat Harris, who didn’t run for re-election. Tolbert hopes next month’s meetings will get the two sides talking again with an eye toward finding a compromise.

“We need to get a lot of public input, a lot of discussion, and decide as a community how to move forward,” he said. “The saddest thing is to see this divisiveness among neighbors.”