News
Two Cities
This coverage is made possible by a grant from The Saint Paul Foundation.
Dec. 22, 2011 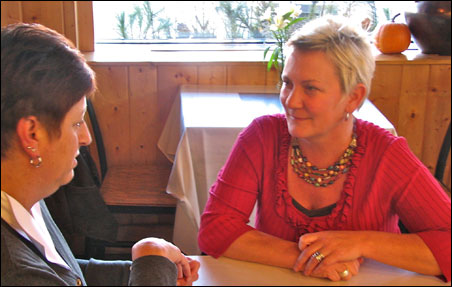 Amy Brendmoen, bike commuter and newly elected City Council member from St. Paul’s North End, says she’s energized and raring to get to work on the people’s business when she’s sworn in Jan. 3.

But the new 5th Ward representative said she’s kind of glad she didn’t have to deal with next year’s budget problems.

“I’ve been watching from a perch, glad I’m not there just yet,” she said after the council approved the 2012 budget last week.

During final budget negotiations, council members clashed with Mayor Chris Coleman over some Fire Department operations. The council approved money to keep a third Rescue Squad operating in the city, but the mayor may decide to use the money in other ways to increase fire coverage.

“That’s over. Now we can move forward with a fresh page,” Brendmoen said.

She’s one of two new council members to take office at the start of the year; Chris Tolbert was elected in Ward 3, replacing Pats Harris, who didn’t seek re-election.

An open seat?
Brendmoen, who’s been communications director at Children’s Home Society for more than two years, says she’s long had an interest in politics, but running for office didn’t seem practical with three children at home.

“But when I heard [incumbent] Lee [Helgen] wasn’t running, my friends all said, ‘When will there be a better time?’ “

Of course, Helgen did run for re-election, but Brendmoen was, by then, all in.

“I figured, I’m up to a challenge and the people need a choice,” she said.

A key to her victory in November came in June, when she managed to keep Helgen from securing the DFL endorsement during four ballots at the Ward 5 convention at Como Park Senior High. Helgen led in all the ballots, in the 55 percent range, but couldn’t get the 60 percent needed for endorsement.

Helgen, seeking his third term in a city that generally supports incumbents, was a tough competitor. Especially when, to many, there wasn’t much of an ideological difference between the two candidates. But there was a perceived difference in personalities.

Helgen had name recognition, a Star Tribune endorsement and eight years of making friends by working in the ward, but some thought he was distant and dismissive, while Brendmoen presented an engaged, enthusiastic alternative.

“I’m approachable and communicate with people,” Brendmoen said. “I’m energized and have shown that I can come up with a plan and get folks behind it and bring it to life.”

And she had some hefty endorsements:

Mom and triathlete
A political science major at the University of Wisconsin, Madison, Brendmoen worked for 11 years as an advocate, mediator and spokesperson in the Minnesota Attorney General’s Office during the Skip Humphrey and Mike Hatch days. She then worked in advertising and marketing and event planning before joining Children’s Home Society, which helps with adoption and child and family education.

She’ll cut back on her day job to two days a week in January, when her council duties begin. Her new council aide, Kim O’Brien, had previously worked for Brendmoen at Children’s Home Society, as community relations manager.

She says she’s a three-season bike commuter and calls herself a “middle of the pack” triathlon competitor. And she is co-founder and co-race director of the Croixathlon triathlon, a fundraiser for the YMCA’s Camp St. Croix.

After meeting Brendmoen at a St. Anthony Park coffee shop this month, Council President Kathy Lantry reported to me:

“I liked her instantly. She has great energy and think she will be a wonderful colleague. Her style seems very collaborative. She also seems like she wants to jump in with both feet. She had gobs of questions and it was fun to try and answer them, it also re-energized me. I don’t know how her real life experience will play into our process, but she will bring another perspective that will be fun to watch grow and develop.”

And Brendmoen says she was treated with respect by Helgen during a post-election briefing about their ward. “I appreciated his willingness to chat about projects moving forward in the ward, and about some urgencies with a couple problem properties we need to get a handle on,” she said.

“I’m in a learning phase; there’s a lot to know, but it’s exciting. In some ways, the more I learn, the more reassured I feel because I can see how things tie together and that there are ways I can move the dial,” she said.

Housing, she knows, is a big issue in her working-class ward that’s been hard hit by the economy, with job losses and foreclosures.

She’s also met with firefighters “to get the big picture of their needs and how it played out in the budget.” She said she’s made no decisions on how to deal with the rescue squad issue: “I’m still in the learning mode.”

But she adds: “Public safety is a top priority for me and the people in my ward.”

Even before moving in, she announced a program that will allow area artists to display their work on her council office walls.

“I saw that the walls are big and they’re bare; I figured local artists with their paintings and sculpture could make it a better place to work; we’ll reach out to the Hmong community and other communities, and some schools for student works. It will be a rotating thing, and they can put price tags on, in case someone wants to buy,” she said.

The other night, she and her three sons were at the kitchen table putting invitations to the inaugural and inaugural ball into envelopes. “The kids are excited; I’m excited,” she said.

“It was an uphill battle taking on an incumbent, but the voters took a chance on me, and I feel it’s my responsibility to do an excellent job, because they took that chance.”