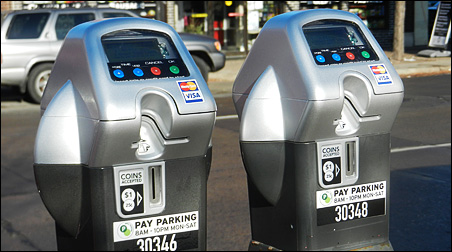 MinnPost photo by Karen Boros
Minneapolis will go with the new single-space meters that take coins and credit cards in the East Hennepin business district.

The parking public in Minneapolis currently has its choice of four different meter styles.

Don’t worry. By the end of summer most of the coin-only meters will be but a memory and we’ll be plugging meters all over town with our credit cards.

It all started two years ago, when the old and really old meters clearly needed to be replaced.  They broke easily and were expensive to service. The city got proposals for replacement meters from 16 companies and selected six of those companies to be part of a six-month meter test.

This being Minnesota, it only seemed fair to start the test in November. In June here, everything outside works fine, but when winter weather kicks in, outdoor conditions eliminated the chumps from the champs in the meter competition.

“They all kind of resisted 20 below,” recalls Traffic Engineer Tim Drew of Minneapolis Public Works. The winner in the multi-space category — there were four candidates — is a solar-powered system with a pay station in every block.

“They weren’t the cheapest,” says Drew, but they hit the medium-range price. In all, Minneapolis will spend $6.6 million before the total three-year meter replacement project wraps up this coming fall.

Meanwhile, on the other side of the river, the parking meter “day of reckoning was at hand,” according to St. Paul Works spokesman Dave Hunt. 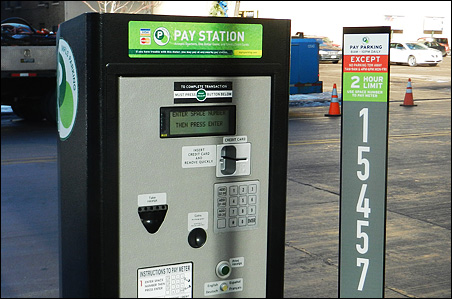 MinnPost photo by Karen Boros
Both Minneapolis and St. Paul will use the multi-space meters downtown.

The initial replacement favorite was a single-space meter that took credit cards. In the fall of 2010, the city installed 50 test meters along St. Peter and Wabasha streets.

This being Minnesota, it didn’t take long to discover the meters didn’t work so well in cold weather. There was also a vendor charge for credit card use that the city wasn’t happy about.

“We were aware our counterparts in Minneapolis were experimenting,” said Hunt of the multi-space meter system tested in Minneapolis. After comparing test results, Hunt said St. Paul engineers “felt more comfortable” and decided to go with the same multi-space system selected by Minneapolis.

Because St. Paul is purchasing its multi-space meters from the same company as Minneapolis, the two cities will be buying under one contract, the Minneapolis one, giving both cities a better price than under separate contracts.

Both cities will use the multi-space meters downtown. There are three things the parking public can kiss goodbye with the new system:

• Climbing “the snow mountain” to feed in quarters. No sadness there. All you get at your parking space is a number, which is on a post where the meter used to be. You can see the number from inside your car. How civilized. Then you walk to the nearby pay station,which the city will keep shoveled out.

• Free time left on a meter by someone else. It will still be there, but it will harder to find.   “Trolling for additional time is tougher,” says Drew. That’s because you will not find any free time on your multi-space parking location until you punch in your number at the pay station.

St. Paul will be using the new electronic version of the coin-only meters outside of downtown along University Avenue and at the state Capitol. 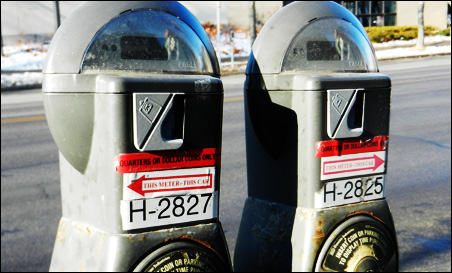 Minneapolis will go with the new single-space meters that take coins and credit cards in the East Hennepin business district and in other areas with 10 meters to a block — which Drew describes as “10 opportunities to break down.”

New coin-only meters will be a very limited part of the parking system showing up in isolated areas of less than 10 meters.

Both cities will be enforcing the parking meters with smart phone technology that will tell ticket writers that a meter has expired. Under the current system, meter monitors know only if there is time on the meter or if the meter has expired. They don’t know if you have been illegally parked for an hour or five minutes.

With the new system, they will know exactly how long you have been illegally parked when they stop by to get your plate number. Chances of talking your way out of the ticket are diminished.

One final tip:  You want to keep the receipt.

Two reasons: The receipt tells you the parking space number for which you have just paid and the exact time the meter expires. Make sure you paid for the space in which you have parked. If not, pay again and this time, get it right.

And remember that the expiration time on your receipt is the time the enforcement person will be alerted to a meter violation.

One final note:  As we all strive to eliminate credit card debt, we apparently love paying for parking with our magic plastic cards.  So far in Minneapolis, 75 percent of the meter revenue is coming from credit cards.