News
Two Cities
This coverage is made possible by a grant from The Saint Paul Foundation.
Feb. 20, 2012 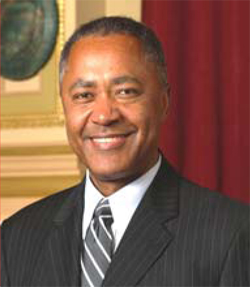 Don Samuels, one of the first Minneapolis City Council members to voice support for the stadium proposal, represents Ward 5, on the near north side of the city. Samuels chairs the council’s Public Safety, Civil Rights and Health Committee.

Earlier, we heard from two council members who oppose the city’s plans for the proposed Vikings stadium. Today, we continue with our series of conversations with council members discussing their views.

Samuels’ views in support of the plan:

MinnPost: The day Mayor R.T. Rybak made his first formal stadium presentation to the City Council, you were the only one, besides Council President Barb Johnson, to say you support the plan. How did you come to that position?

Don Samuels: We’re going through a very difficult economic time. We have a lot of laid-off workers, and when you have laid-off workers in the white community, we have a crisis in the black community.

So we have Summit Academy putting out workers who can’t find jobs and are in line behind all of the folks who are laid off.  So, we’re stuck.

We have the federal government funding big projects, which we have celebrated, so we can fix roads and fix bridges, and this is an opportunity for a more local revitalization effort. It just so happens that the stadium concurs with a need, and I think that’s a great way to look at it.

“In addition to that, at the time, my preferred site — and it still is — is the Farmers’ Market because it’s in the Fifth Ward. It would be a great boost for the Fifth Ward. The proximity would give my constituents a greater opportunity to walk over there and apply for a job and get involved in the economic opportunities there.

Finally, the last reason I was excited about supporting it was the potential for healing some of the disparities and gaps in employment, set some high benchmarks for minority and women hiring in construction but perhaps, more importantly, in the operation of the stadium.

We have an opportunity to start over and create new benchmarks for minorities and women.

MP: Sounds like this was an easy decision for you?

MP: What kind of reaction have you gotten to your support of the stadium?

DS: Most of the reaction I get is from outside my constituency. I get support and opposition.  It’s pretty much even.

I understand the opposition. I understand people not wanting to give tax dollars away to rich guys, but one of the realities of my life — and maybe the lives of other minority persons — is you learn to live with stuff that’s not perfect and make the most of it.

MP: So you would be a yes vote.  Do you think there will be enough yes votes to prevail?

DS: I think there’s room for a slim majority. I’m not sure it would be an overwhelming majority.

“People [council members] are a little shy about investing large amounts of money downtown. There’s a certain ghost that walks these halls. After the last set of failures, there was a big sweeping out of City Hall. Six or seven new Council Members came in, so nobody wants to get caught up in that briar patch.

MP: You’re talking about Block E and the Target Center?

MP: Back to the reaction you’re getting to your stadium support. What are you hearing from the Fifth Ward?

DS: Some people are saying that if people want a stadium, they should pay for it themselves. [They say,] “I don’t want one. I don’t go to games. Why should I be paying for it?”

[(They say,] “They’ve got rich guys running around carrying footballs on the field, and we’re going to make higher-paid millionaires of them.”  And then they’ve got this one: “This rich guy from New York who is buying expensive condos, $19-million, and we’re subsidizing that.”

I’m one of the 99 percent, so I don’t like the inequity of it. I’m trying to find ways, in my process of approval, to make sure the 99 percent do a little better in the process.

MP: And you see the jobs as overriding these objections?

DS: Yes. The jobs and the opportunities. And I like the fact that there’s not going to be any new pain. This is going to use money that we’re already paying [the hospitality tax].  Of course, it is our money, but it’s not going to be additional money.

And that makes it easier.That attracted me to contemplate the other benefits. I’d hate to see the team go somewhere else, the marketplace get even more fractured and downtown become less of a mecca.

There is such a thing as synergy. A concentration of attractions creates synergy. Right now, we know the synergy we have downtown.

And there are tipping points, positive and negative. If you have fewer people coming downtown, some businesses are going to be tipped out.

People say if you look deeply at the numbers that the financial arguments for have a team don’t bear out. Other people say, “Oh yes, it really helps economic development.”

I need a little more education on [those two arguments]. Both sides need to argue their point more publicly because both are equally insistent that they are right. They need to prove their points.

MP: But you are still a stadium supporter?

DS: I must say I’m encouraged by the Twins stadium — and the fact that it turned out to be such a beautiful thing. The confinement of the space led to a certain efficiency of design and effectiveness of design that is surprising and refreshing and has impressed the whole sports world.

It if was a disaster, I think, not only I but many people would say, “Let’s not throw away more money.” But that one has certainly worked out.