News
Two Cities
This coverage is made possible by a grant from The Saint Paul Foundation.
March 30, 2012

For decades, the drawing of Minneapolis ward and park district boundaries occurred behind closed doors, where political appointees did battle in private.

Voters scrapped that system in 2010 when the redistricting process of line drawing was handed off to the Charter Commission, which is appointed by the chief judge of the Hennepin County District Court.

As a result, the first political boundaries [PDF] created in public were unanimously approved this week by the Charter Commission.

“What they would do in the old days was each side would create competing maps and lobby behind closed doors to get votes and see what they could cook up,” said Charter Commission Chair Barry Clegg.  “The public wasn’t involved in the process of drawing maps and couldn’t watch.”

This year, the whole process was done in public, sometimes painfully, as communities of interest came to make their cases as the Redistricting Group, appointed by the Charter Commission, moved lines and split hairs.

Early on, the Citizens Committee for Fair Redistricting, representing the Somali and East African community, made their case for creation of a ward dominated by African- Americans to increase minority representation on the City Council. They came with their own map of how Ward 6 might look if lines were drawn to give them an opportunity to elect one of their own to the council.

“We have a better chance than we did before,” said Abdulkadir Warsame of the Fair Redistricting group.  “We’re very happy that we actually took part in the process.”

“Politically, we’re much more energized now,” added his colleague, Hussein Ahmed.  ”We will get a candidate that represents the East African community and who we can all be proud of as Americans.”

“They didn’t get the map they asked for, but it got them more than 40 percent of the African-American community in that ward (Ward 6) and I think their map was 42 or 43 percent,” said Clegg. “In terms of getting the population, I think it accomplished the same thing.”

The African group was followed by numerous communities of interest each making a case for moving a line or moving a neighborhood out of one ward and into another.

“It was often difficult.  It was a tug of war between neighborhood interests,” said Charter Commission member Andrea Rubenstein.  “Our job was to balance those interests.”

“It’s not perfect, but I think it’s a good piece of work,” added Charter Commission member Natonia Johnson.  “It gives the city an opportunity in Wards 6 and 9 — maybe Ward 2 — to bring diversity to the City Council.”

“After looking at the statistics and listening to the testimony we heard from the public, it became clear to me that standing pat was not going to produce the best plan,” said Charter Commission member Andy Kozak, a veteran of redistricting battles in the past. 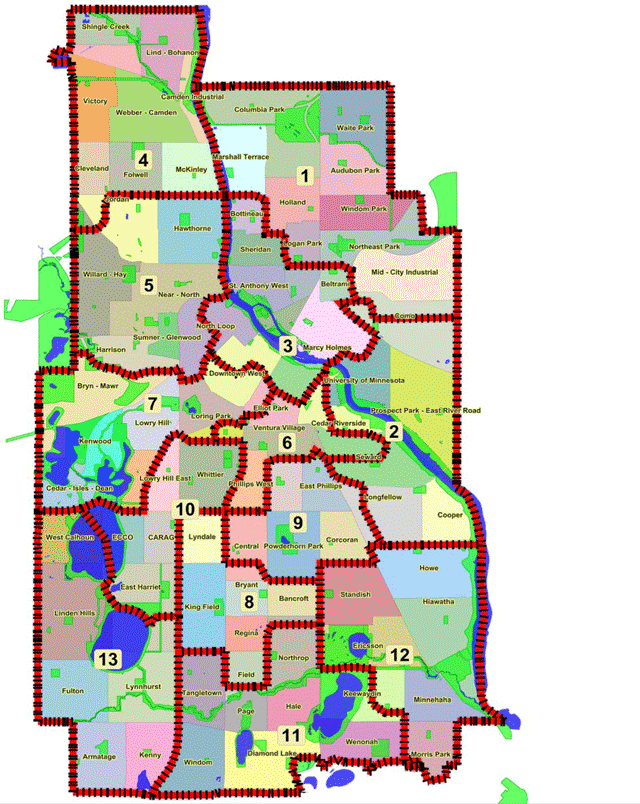 “In Ward 2 we took away part of the Cedar-Riverside neighborhood and part of the Seward neighborhood to accommodate the Ward 6 issues of the East African and Somali communities, to combine those communities of interest. Taking those out meant that Ward 2 needed to add population, so we extended Ward 2 down into the Longfellow Neighborhood.

“Ward 6 had included the Whittier neighborhood and did not incorporate the Seward neighborhood and that meant there was a divide between Wards 2, 6 and 9 of the Somali and East African community that is concentrated in the Cedar-Riverside and Phillips neighborhoods.

“What we did was extend Ward 6 into the Seward neighborhood along the Franklin Avenue corridor to pick up the Somali and East African community and eliminate the split into three wards.  If we’d given them (the African group) the map they asked for, we couldn’t accommodate some of the neighborhoods and other community interests.”

“Ward 9 got extended farther south, but we brought it up and consolidated it into Midtown, East Phillips and the Powderhorn neighborhood. That was largely driven by an attempt to give the Hispanic community an opportunity. The Hispanic community in Ward 9 is now approximately 32 percent.”

“Ward 3 needed to pick up population so we moved it across the river and picked up the river corridor, which means downtown is now divided between Wards 3 and 7.  We heard from numerous people that downtown should not be in one ward.”