News
Two Cities
This coverage is made possible by a grant from The Saint Paul Foundation.
March 16, 2012

Despite this week’s initial setback for the Vikings stadium bill, Minneapolis Mayor R.T. Rybak remains optimistic — and persistent — about the eventual success of the plan he’s pushing.

The stadium bill was supposed to get its first committee vote on Wednesday, but instead committee members raised last-minute concerns about funding proposals involving charitable gambling. As a result, the Senate Local Government and Elections Committee delayed action indefinitely on the bill.

The day after the vote, we asked Rybak to assess the stadium situation.

MinnPost: So what happened on Wednesday?

R.T. Rybak: The committee wasn’t ready to pass the bill. I think it’s just one in a series of predictable speed bumps that are going to take place. I think people should get used to them. We’re headed in a single direction, but it certainly will not take place in a straight line.

MP: The bill’s author, Sen.Julie Rosen, says DFL committee members who were expected to vote for the bill changed their minds at the last minute, which is why the vote was canceled.

RTR: I’ve heard both sides of that story. I have no idea what is true. We have a reality to deal with. This is one of the most controversial issues with a very complex funding strategy. It is going through one of the most divided Legislatures.

This won’t always be pretty. People just have to get used to that and get comfortable that these next few weeks will have ups and downs. In the end, I believe it will get done.

MP: Have you thought about waiting for the next legislative session and perhaps a different group of lawmakers?

RTR: People have for a decade been saying it’s better to wait for the next Legislature. Gov. Pawlenty took an eight-year pass on this. Gov. Dayton has been pushing hard on this for a couple of years.

We may get another Legislature that may or may not be more open to it [the stadium].  And in their first year, [the new lawmakers} will say, ‘Gee, let us get our feet wet.’ And in the second year, they’ll say, ‘We’re up for election.’ The same cycle will go on and on.

I’m not giving up on this issue until we get it solved. I’m as interested in doing this for another Legislature as I am having my toenails removed one by one.

Does anybody want to go through this again?  Can’t we get this done and get on to things like school funding, transportation and health care? Let’s just get this thing done.

RTR: I’ve been focused very much on the part that is in my lap, the share that would come from the city. Thankfully, there haven’t been a lot of questions about that. That’s good news. I’ll let those over at the Capitol deal with the state funding. I’m going to focus on my end of it.  I’ve got enough on my plate.

MP: One of the things on your plate is dealing with a City Council that doesn’t have the needed seven votes to approve the stadium plan. How are you dealing with that? 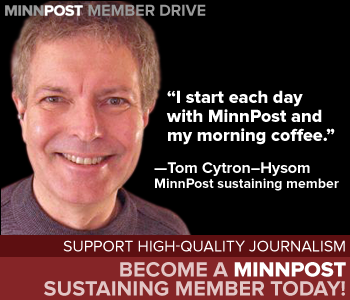 RTR: I believe that’s an over-statement. I’ve believed from the beginning that until we have a specific bill and we know what’s in it, that there are definitely seven people who could vote for this. [pause] Whether we can get them or not is still debatable.

MP: When I talk to City Council members, they say one of the big stumbling blocks is the charter amendment requiring a public vote on the city spending more than $10 million on sports facilities. How do you get around that?

RTR: The way this is structured now the state will take the first part of the money they collect by imposing a tax on us. That doesn’t impact our charter. That’s my understanding.

In return, for the first time, we’d actually have some control over those dollars, and we could use them for Target Center.

So one of the biggest issues — and I understand it’s a big issue — for people has been the charter. They didn’t want to override the charter, and now they don’t have to. So I think that changes the calculations.”

[City Attorney Susan Segal has issued this statement on the charter matter: “Based on my reading of the current proposal the legislature would direct the Commissioner of Revenue to retain a part of the Convention Center Taxes for the purposed of paying off certain capital and operating expenses required for the proposed Vikings Stadium.  If that is the case, the taxes would be outside the control of the City and our Charter provisions.”]

MP: So this is a state tax controlled by the state?

RTR: That’s pretty clear to me. I’ve been here 10 years trying in every way humanly possible to figure out some way to get at those dollars. I would have spent them years ago for property tax relief and to hire more cops. But we can’t. We don’t have control. They’re not our dollars. They’re imposed on the city.

We’re basically saying to the state, “Take part of that and put it into the Vikings stadium and, in return, give us, for the first time, some control over the rest of it, which we could turn around and invest in the Target Center and the Convention Center.

I also believe that people, as they understand this complicated proposal more, that they’ll realize some of the upside. Nothing about this, whether it passes or fails, will impact how much we have for debt service on the Convention Center for the next few years.

What it will impact is what we have long term. This very complicated scenario is actually very simple.

It’s not taking money from the Convention Center because there’s no guarantee that the state is going to let us keep those dollars. In fact, they’re probably going to take them if we don’t do this. The more people who understand this, the better.

This is a good thing. I’ve always said this will be the hardest earliest, when people react just generally against this idea of public funding for a stadium for the Vikings.

When they realize this is a combination of the Convention Center, Target Center, the stadium and property tax relief, it’s different.

We were asking our folks for support before we really knew what impact this would have on the charter. The answer is none. We finally know these answers.

MP: There are no City Council meetings this week. Have you started leaning on folks?

RTR: “Oh, yeah. [He laughs.] Yes, we’ve been having many fruitful discussions. I think part of it is there are a few folks who want to support it but are really worried about the politics. I get that.

I don’t know what that’s all about, but it’s interesting. I believe, also, there have been many folks who have changed from knee-jerk opposition when they understand the details.

MP: Have any stadium opponents on the council switched sides?

RTR: I think we’re getting there. We’re not there yet. We’re working very hard at this.

MP: Looking back, would you have done anything differently?

RTR: I would love to have had less speculation about an ever-evolving plan. We were asking people about something that theoretically may or may not happen. That’s tough.

The way this thing worked was I said to [Hennepin County Commissioner Mike Opat early on, “If you guys lead, we’ll follow. If not, get out of the way and we’ll lead.”

When the county pulled out, Council President [Barb} Johnson and I had to react quickly. We had some plans, and in a couple of days we were on radar.

Those were a tough few months because the momentum was with Ramsey County. I’m happy we jumped in at that time because had we not, this thing probably would have been in Ramsey County.

I’ve got nothing against Ramsey County, but I’m not going to sit by easily while a business gets moved out of my city with public money. Once it turned more toward us, there was rampant speculation back and forth, and we were not always in control. I regret that. It made it more difficult for City Council members who sometimes felt they were being kept in the dark.

“It’s easier now. As this thing goes on, I’ve become more and more convinced this is the right financial deal for us. One of the things the council members will have to take credit for, or answer to, in the next election is whether they stood by or tried to help when we were attempting to lower property taxes.

People are worried about what the stadium will be in the next election. They should also be worried about the fact that property taxes will be an even larger issue. I’m going to make real clear who helped and who didn’t.

I talked to the governor this morning. We are definitely in this for the long haul. We believe deeply in what we are doing, and we’re willing to keep fighting real hard.

Note: The mayor’s staff is working to organize a series of town-hall-like meetings to discuss the stadium plans with the public. No dates have been set yet.