News
Two Cities
This coverage is made possible by a grant from The Saint Paul Foundation.
April 4, 2012 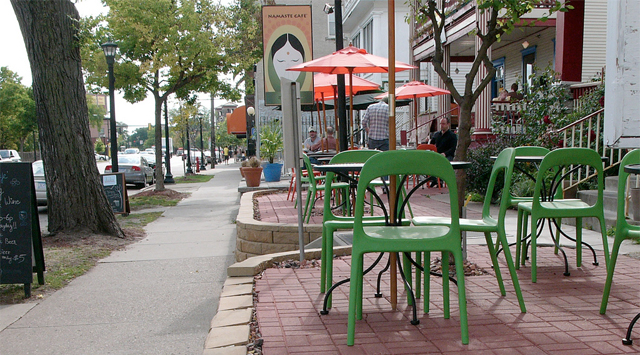 Photo by beavelaThe patio outside Namaste Cafe in Minneapolis.

If you want to sit outside at a patio bar and restaurant this summer in Minneapolis, you’ve now got more options.

And if you live near such an establishment and want to sleep on a weekend night, good luck.

The City Council’s Regulatory, Energy and Environment Committee voted Monday to increase number of outdoor patio seats in Uptown by at least 172 this summer, with an additional 177 outdoor seats being added downtown near Target Field.

All will be staying open until 2 a.m. on weekends.

And there are new developments for late-night weekend diners in the Uptown area. If you want to stop for some food after the bar closes, the Jimmy John’s in Calhoun Square will be open until 3 a.m.

A block away on Lake Street, however, Mesa Pizza will be shutting down at 2 a.m., after several months of problems.

Mesa Pizza, which opened in Uptown last fall, had asked to stay open until 3 on weekends. Instead, committee members approved a 2 a.m. closing and asked the managers to apply again for the 3 a.m. license after they had been in business for a few months.

Things, however, did not go well for Mesa. Not long after the businessstarted, city inspectors observed them open after their legal operating hours. A few months later, Inspectors observed a crowd of 20 or 30 customers leave the business at closing time and then stand in the street hailing taxicabs and making noise.

A week later, a smaller crowd leaving at closing time to seek taxicabs. Video of a noisy crowd outside Mesa was shown to committee members. Inspectors also said they saw no security staff during any of their visits.

The committee voted to deny the 3 a.m.weekend closing time.

Jimmy John’s, with one citation for being open after its legal operating hours, was headed for the same fate. City inspectors had recommended against the later closing time.

“I want to be clear here,” said Council Member Lisa Goodman. “We’re saying you can’t be open even though you’ve done nothing wrong?”

“It’s the totality of the area that we’re concerned about,” replied City Inspector Greg Buenning, who explained that the 3 a.m. closings create another noise wave after the bars and restaurants shut down at 2 a.m.

“There is absolutely no rationale to deny their application,” said Goodman. “Maybe we have to decide what the hours are in Uptown.”

Michael Mulligan, owner of the Calhoun Square Jimmy John’s and seven others in Minneapolis came forward and apologized for being open beyond the legal hours of operation.

“We are very diligent about the behavior of people in our stores,” said Mulligan, adding, ”We’ll be willing to hold ourselves accountable.”

Council Member Meg Tuthill, who represents the Uptown area, said: “This is a very tough call. This is a very respected business, but I know the residents are sick and tired of it [the noise].”

The committee ended up approving the 3 a.m. closing on weekends for the Jimmy John’s.

“I think we’re just trying to do our best job and look at all of the surrounding factors,” said Committee Chair Elizabeth Glidden after the meeting.  “We want a business to be successful, and successful for the surrounding area as well.”

Here’s a quick look at some of those expanded outdoor options:

Bar Louie: A new bar and restaurant that is part of the Mosaic Project on Lagoon in Uptown plans patio seating for 172, with indoor seating for another 314 patrons. The committee approved a list of eight operating conditions for Bar Louie, including a 1 a.m. weekend end time for outdoor amplified music. The management had sought to keep the patio open until 2 a.m. daily. Committee members, however, approved a midnight closing Sunday through Tuesday and 2 a.m. Wednesday through Saturday.

Famous Dave’s: The Calhoun Square restaurant has operated a patio since August 2010 with seating for 40 patrons at 10 tables. It asked to expand its patio hours to match the indoor hours. The committee approved the request allowing the patio to be open from 10 a.m. until 2 a.m. The management also agreed to no outdoor amplified music.

Pat’s Tap: This bar and restaurant in the 3500 block of Nicollet Avenue South wants to expand patio seating from 28 to 54 with an 11 p.m. closing Sunday through Thursday and midnight on Friday and Saturday. They agreed to no amplified music and to control loud patrons.