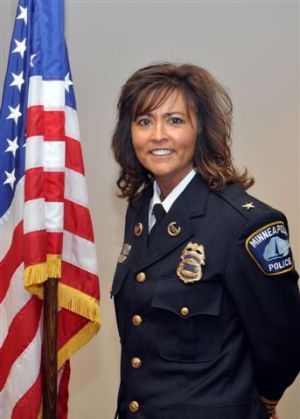 Assistant Police Chief Janee Harteau was 22 when she when to work for the Minneapolis Police Department in 1987.

Now, 25 years later, she is on track to become the chief of police when Chief Tim Dolan retires at the end of the year.

Minneapolis Mayor R.T. Rybak says has been interested in nominating Harteau for the chief’s job since he nominated Dolan for a second term and found out that Dolan planned to retire after his term.

Rybak said the early nomination will allow Harteau to “really go out into the community and really listen,” before taking over as chief in 2013.  He sees this as her opportunity to bring a fresh perspective to the job.

“She had an opportunity to prove herself, and she stepped up every time,” said Rybak. “She has a great grasp of all parts of the department.”

Harteau worked in the narcotics, organized crime and license review units before being appointed an inspector and assigned to downtown Minneapolis.

“She is exceptionally good downtown,” said Rybak, who admired her ability to bring members of the business community, residents and the police together.  “She understands the human side of crime and public safety,” said Rybak.

Harteau became the deputy chief of the Patrol Bureau in 2009 and was promoted to assistant chief in 2011. She has a bachelor’s degree in police science and a master’s degree in public safety administration, both from St. Mary’s University. She is a graduate of Northwestern University’s School of Police Staff and Command.

“I felt it was very important to very clearly say I have complete confidence in her,” said Rybak, explaining why he nominated Harteau eight months before she will stand for confirmation by the City Council.

If confirmed, she will be the first woman to lead the Minneapolis Police Department.

Harteau is of French Canadian and American Indian heritage.