News
Two Cities
This coverage is made possible by a grant from The Saint Paul Foundation.
May 3, 2012 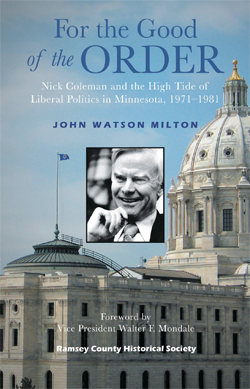 A new book about Nicholas Coleman — the state’s most powerful legislator in the 1970s — has some important lessons for today. Like: Can’t we all get along?

That’s the take of St. Paul Mayor Chris Coleman, son of Nick Coleman, the late state Senate majority leader. (The other Nick Coleman, the former newspaper columnist who is another son of the senator, told the author he didn’t want to be interviewed for the book. And he told me Wednesday he doesn’t have anything to say about it now, either.)

But Chris Coleman did talk to the author, former state Sen. John Milton. So did the other Coleman children and Nick Sr.’s two wives, Bridget Coleman and newspaper editor Deborah Howell, both now deceased.

Milton’s book — “For the Good of the Order: Nick Coleman and the High Tide of Liberal Politics in Minnesota, 1971-1981” ($34.99) — is published by the Ramsey County Historical Society Press.

As he reads an early copy of Milton’s book, Chris Coleman said he’s struck by how the battling state leaders in the past disagreed on policy but still remained friendly and were able to work out compromises.

“A critical point for me, as I read this, is how the policy debates in the 1960s are much the same as now — keeping property taxes down, funding education, having the right business climate while still taking care of those in need — and there were fundamental differences among the lawmakers,” Chris Coleman said.

“But my dad was a good friend of Stanley Holmquist, the [Republican] majority leader, and they were able to get along and put their differences aside.”

Today, the political differences have morphed into personal antagonism in many cases. Chris Coleman thinks that’s because the Legislature began meeting in annual sessions in the mid-1970s, and also started running with party designation on the ballot.

“That changed the nature of what it meant to be a legislator; it increased partisanship and made it more difficult to get to know each other across the aisle,” Chris Coleman said.

Milton, who was a state senator himself for one term in the mid-1970s, spent more than five years working on the book about Coleman. One of the first people he talked to was Chris Coleman.

“He asked if anyone else was working on a similar book, and if I had any objections to him doing it. The answer to both questions was no,” the mayor said. 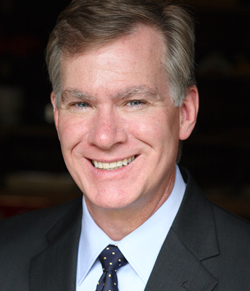 Early readers say it’s not a critical look at Coleman or the times and relies heavily on his friends and colleagues for the insights.

Milton says the biography looks back at the Coleman family history in County Kerry and County Cork in the 19th and early 20th century.

“It also chronicles the evolution of liberal politics from the time of Governors Olson and Benson in the 1930s to the emergence of Hubert Humphrey in the 1940s and into the ’50s and ’60s when Nick Coleman first ran for the Minnesota Senate (1962),” he said.

Milton says he conducted more than 200 interviews, read every relevant book about the period and practically lived at the Minnesota History Center going through files.

“I plowed through 49 file boxes of material in the Nicholas D. Coleman archives [though not reading every file],” Milton said.

And there were those interviews with the family, which gave insight into the other side Coleman’s life.

“Because of the fine cooperation from the Coleman family and close friends, I was able to reconstruct those aspects of his life away from the Capitol that were most important,” he said.

And Milton told the Pioneer Press:

“Nick wasn’t around much when his kids were growing up. We were all so busy trying to save the world, we didn’t have time for our kids. Divorce statistics from those days are jarring.”

That, says Chris Coleman, is another lesson to be learned from the book.

Politics can be hard on family life, he said, noting that his mother had difficulty talking about those days while doing the interview with Milton many decades later after she was divorced and Coleman married Howell, then a reporter covering the state Capitol and later editor of the Pioneer Press.

Few sons and daughters of the leaders of that era have gone into politics, but Chris Coleman did. He was 8 when his dad ran for governor in 1970, losing the DFL endorsement to eventual winner Wendell Anderson.

“My brother Pat says I was young enough to understand the power of what he accomplished, but not old enough to see the toll it took on our family,” Chris Coleman said.

I asked if he, as a former city council, congressional candidate and mayor, avoided some of those pitfalls?

“Yes,” Chris Coleman said. “Those were different times and the lesson has been learned. Political jobs are tough on a family, and you really have to put your family first.”

Chris Coleman said he’s he glad that Milton’s book puts the spotlight on his father, who, like other unsung legislators, wielded great power but it was most often behind-the-scenes power.

“If someone makes a list of the 10 most influential politicians in Minnesota history, you’re likely to get 10 governors,” Chris Coleman said. “But Roger Moe should be on there, too. Every major piece of legislation for 20 years was shaped and directed by Roger Moe, and for eight years before that, it was done by my dad.

“He hasn’t got recognition and credit for some of the things that happened. The Minnesota Miracle is widely credited to Wendy Anderson, but my dad had just as much a role in shaping that.”

Some things in the book that Chris Coleman said were new to him:

“I knew [former Vice President Hubert] Humphrey played a key role in the ’70 convention [where Anderson beat out Nick Coleman for the endorsement] but Milton showed that Humphrey had a bigger role than I’d understood it to be.”

“And my dad had been a big supporter of [U.S. Sen.] Gene McCarthy, but he was out gallivanting around and didn’t provide much support for my dad at the ’70 convention.”