News
Two Cities
This coverage is made possible by a grant from The Saint Paul Foundation.
May 10, 2012

Once Gov. Mark Dayton signs the stadium bill, the Minneapolis City Council has 30 days to vote on accepting or rejecting the legislation.

How this comes out is no big mystery because there are seven stadium supporters on the 13-member Council, and they have already voted on the proposal once.

The tentative voting schedule outlined today by City Council Vice President Robert Lilligren places the stadium legislation before the Ways and Means/Budget Committee on May 21. There are three yes votes and three no votes on that committee.

A tie vote could send the stadium proposal could before the full City Council with no recommendation from the committee.

This could produce a May 24 vote of the Committee of the Whole, followed the next day by the formal City Council vote.

The City Council could also be convened by Mayor R.T. Rybak or, in his absence, the council president, for a special council meeting to consider the stadium legislation.

And just because this seems like a done deal, don’t expect City Council members on either side of the issue to miss a chance for public comment. 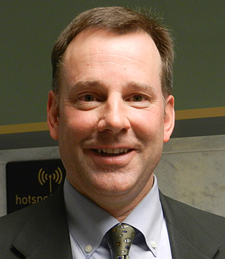 Aasen, who has been Gov. Mark Dayton’s head of the Pollution Control Agency, also served in leadership positions for Govs. Jesse Ventura and Arne Carlson.

“He has managed large organizations that have legislative bodies. This will not be new to him,” said Rybak as he introduced Aasen. “He’s a person who has a professional, easy-going attitude,” the mayor added.

Aasen fielded questions about his scientific background and experience, telling council members about the “continued need to drive value out of the government service machine,” which he said is the measure of government doing its work.

Craig Johnson of the League of Minnesota Cities was among those praising Aasen, describing him as a “creative problem-solver” and someone who is “always calm.”

“It’s hard to endure that much public praise,” said Council Member Betsy Hodges, who said she is supporting Aasen’s nomination, but she offered a “cautionary note.”

“It’s possible that he thinks state government has prepared him for City Hall, that he has herded cats at the state Legislature and can herd cats here,” she said, adding, “There are fewer of us and fewer places to hide.”

The Committee of the Whole approved the appointment on a voice vote, sending it to the full City Council for a vote Friday.

The number of property owners who appealed their assessed value in 2012 increased from a year ago but did not match the recent previous high set in 2009, according to City Assessor Patrick Todd, who presented the 2012 data to City Council members.

This year, 81 took their case to the board for resolution. Of those, 40 assessments were reduced, 24 were sustained and 17 were increased.

Most of the appeals came from owners of residential property.

A small correction has been made to newly created voter precinct maps. It seems that one precinct has no known residents because it is in Lake Calhoun. Should there be any voters living in the lake, they will have to mail in their ballots. There will be no polling place for them.