As roads go, this is a short one.

It will be a little more than half a mile with a few bridges, but it will link two parts of Minneapolis that have been almost walled off from each other since the first freeways were built in the ’60s. 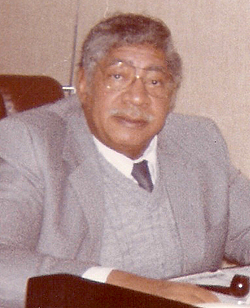 Van White Memorial Boulevard will be 3,050 feet long and link the North Side to the South Side of Minneapolis.

The Van White Paving and Bridge Project is named in honor of the first African-American member of the Minneapolis City Council. White served on the City Council from 1980 until 1986 representing the 5th Ward. He is remembered as a champion for the North Side, where he lived all of his life. He died in 1993 at age 68.

The new road will be just west of downtown Minneapolis and north of I-394. It will connect the area just north of Glenwood at Fremont to Dunwoody Boulevard under I-394.

“He would have been so humbled,” said his widow, Javanese White, who attended Tuesday’s celebration of the road and bridge construction. “He wasn’t looking for the spotlight. He was more interested in doing the work.”

“This will begin to reconnect the area physically but also psychologically,” said Rybak. “The Van White Bridge says North Minneapolis and South Minneapolis, meet your new neighbor. You’ve been next to each other for years, but you couldn’t get from one side to the other.”

Rybak also likes the fact that people from the South Side will be able to see the new neighborhoods being built on the North Side. It is an area that is home to a lot more than the impound lot.

“We have a massive swath of under-utilized land right on the edge of downtown, right near the Walker Sculpture Garden,” said Rybak.  “You can find a historic home in Old Highland for dramatically less than you would pay anywhere else.”

Construction of the $21 million bridge and paving project started in April and is scheduled for completion in the fall of 2013.

MinnPost photo by Karen BorosMayor R.T. Rybak, center, and other city leaders hoisted shovels during Tuesday’s celebration of the road and bridge construction.