It’s a bit like the quaint village of Brigadoon — without the disappearing part.

But residents of Minneapolis’ Prospect Park neighborhood thought for a time that their homes might disappear like those in the fabled Scottish village. Gone forever, not just for Brigadoon’s 100 years, would be the sweet winding roads, the distinctive homes built into the hillside and abundant gardens all capped with the Witch’s Hat water tower.

Preserving the historic area without tying homeowners’ hands has proved quite a challenge, but residents now think they’ve found a way — though it hasn’t been easy, and time is running out.

Along the corridor, apartment buildings and townhouses were rising from vacant lots. But when developers started running out of those vacant lots, they looked for the next best thing: homeowners willing to sell.

In 2005, letters started coming from developers to property owners whose land was zoned R4, making it possible to replace whatever was there with a four-story building.

“When the Central Corridor discussion began, it became very obvious that this was going to be a dramatic change for our community,” said Joe Ring who is active in the Prospect Park-East River Road Improvement Association.

This neighborhood is bordered on the east by the city line, with University Avenue and the Central Corridor along its north boundary and the University of Minnesota to the west.

At that time, neighborhood residents had been exploring for nearly 10 years the possibility of designation as a Historic Preservation District. Exploring the possibilities had been nice, but the train was coming and it was now time to act.

“The Central Corridor really raised a red flag,” said Ring. He knew if a developer could put together a parcel of land for apartments or townhouses, the project would be a “done deal” and quaint Prospect Park might be but a memory.

They needed something that would buy time for additional deliberation.

As a designated Historic Preservation District, residents would certainly have time for deliberation. The neighborhood group already had applied and had been placed on “interim protection,” which means changes to the outside of structures needed the approval of the Historic Preservation Commission. That process went sour.

“One person in Prospect Park, who wanted to replace a chimney, spent five months filling out paperwork,” said Bob Roscoe, an architect and former member of the HPC.  The commissioners wanted detailed information about the bricks and wanted to make sure the new design exactly matched the old design. “Those exacting requirements were not good preservation,” said Roscoe.

And that wasn’t the only problem.  An elderly resident needed a temporary wheelchair ramp so he could come home from the nursing home. The request was denied.

“It was horrible. It was the worst time of my life,” said Ring. “These were my neighbors.”

The worst was yet to come.  A young couple found out their children had tested high for lead poisoning. The source of the lead was paint chipping from their window frames.

“The easiest way to do the windows was to replace them rather than strip them,” said Ring. If the windows had to be stripped, the family would have to move out of their home for four months. 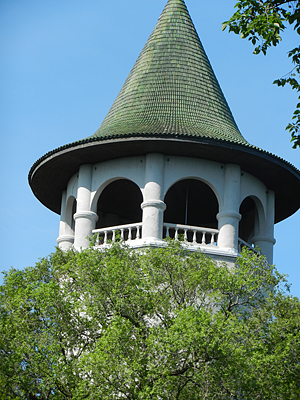 But replacement windows had to be approved by the HPC.  Ring recalls watching the young mother stand before the Commissioners with tears in her eyes.  He had seen enough.

“It was approved, but this was not right,” said Ring.  “It wasn’t for us. This was not the way we wanted our community administered.” The neighborhood asked the HPC to remove their application for historic designation.

“We just felt that the strict interpretation, the way the city was applying the guidelines, would have a freeze-dried, shrink-wrapped effect on the neighborhood.” said Richard Gilyard, an architect and a Prospect Park homeowner. ”We would no longer see the ongoing enriching of the fabric.”

“This neighborhood is an eclectic collection of structures built over a long period of time,” said Gilyard. “We’ve got everything from carpenter Gothic to Frank Lloyd Wright.”

“It’s notable in the city for a lot of houses that are very well-designed architectural examples,” adds Roscoe. “When a historic study was being done, the researchers were surprised that there were houses that would qualify for the National Register. That’s kind of unusual.”

“We like diversity in housing stock because it helps give you diversity in the residents,” said Ring, who calls his neighborhood a “hodgepodge” socially, economically, ethnically and educationally. “We have entry-level homes, and we have very nice expensive homes right next to each other.”

Prospect Park has long been home to University of Minnesota faculty and staff, including architecture and design professors who brought with them their own notion of what they wanted for a home.

There was something worth preserving in Prospect Park, but the Historic Preservation District did not seem to be a good fit.

That’s when residents discovered the possibility of a Historic Conservation District and decided it might work for their neighborhood.

“Conservation districts around the country have been tagged “Preservation Lite,” and there is a little bit of truth to that,” said Roscoe.

“In a conservation district, it’s how you keep houses to be good neighbors to the houses around them,” he adds. “Styles aren’t so important. It’s how the house can present itself among the other houses.

“A conservation district ends up being much more relaxed,” said Ring. “Its main emphasis is actually the culture, the community itself.”

Defining a conservation district is difficult.  In Minneapolis, the rules have not yet been written.  There are plans for an ordinance that would spell out how these districts might function but that could me months away.

There are only two conservation districts in Minnesota: one in Stillwater, the other in Red Wing.

In the early ’90s, Red Wing was experiencing a downtown building boom, which pushed some businesses out into residential neighborhoods. Houses were torn down to make room for office buildings. That’s when the city created the first conservation district in the state.

“It creates an awareness that people are in a special area,” said Steve Kohn, assistant planning director for Red Wing. Under their rules, he notes, the conservation district in Red Wing only deals with demolition, new construction and additions to the exterior façade.

“It doesn’t stop people from making changes,” said Kohn. “If they want vinyl siding because they’re tired of painting, they can have vinyl siding.”

He said the city is thinking about adding a second conservation district.

City rules still a ways away

“I want to make sure people know about it and have a chance to give their input,” said Gordon.  “We’re not creating any district. We’re just going to create the ordinance that would allow people, or the city, to create a conservation district in the future.”

Meanwhile in St. Paul, the city’s Comprehensive Plan allows for the creation of conservation districts but has no ordinance outlining the rules — and no plan to create one any time soon.

“We do not have anything currently planned to study conservation districts,” said Amy Spong, of the St. Paul Department of Planning and Economic Development. But she notes that members of the Frogtown neighborhood have expressed some interest in the districts.

“It all depends on how the ordinance is written,” said Ring. “People don’t like that they can’t do whatever they want. The downside is there are encumbrances. The upside is maintaining the community.”

“We have to find a way to move things forward,” said Gilyard, “because the asset is disappearing while we’re thinking about it.”

‘Preservation Lite’ may be way to save historic Minneapolis neighborhood