News
Two Cities
This coverage is made possible by a grant from The Saint Paul Foundation.
Aug. 7, 2012

“This is going to be a big building — and like the House of Large Sizes, we’re going to have to make ‘big’ look svelte,” Mayor R.T. Rybak told Monday’s first meeting of Minneapolis’ Stadium Implementation Committee.

The 25-member group of Minneapolis residents and elected officials is responsible for reviewing plans for the new Vikings stadium and for the surrounding area.

“We need to develop a vision for ‘the people’s stadium’ beyond being a place for the Vikings to play,” said committee Co-chair David Wilson, an executive with Accenture.

The committee will review and make recommendations to the City Council on design plans for the stadium and surrounding area. By state statute, members will have a minimum of 60 days to review the plans but could ask for more time if needed.

Several members were on hand from the newly appointed Metropolitan Sports Facilities Authority, which will oversee stadium planning and construction. Its chair, Michele Kelm-Helgen, told committee members that she has been spending a lot of time listening to what people have to say about plans for the stadium.

“There are a lot of ideas out there and a lot of really good ideas,” said Kelm-Helgen, adding that the process involving the authority members and the committee members will “be a balancing act.”

“Collaboration is going to be really important,” said Wilson.

Committee members were asked to choose their subcommittee among Design, Planning and Stakeholder Experience. They also received a crash course on the stadium statute and the open meeting laws.

The Sports Facilities Authority has not set a timetable for action but has appointed a firm to do an Environmental Impact Statement for the site.

At the start of the meeting, committee members were asked to introduce themselves, and here are some of their comments:

Co-Chair David Wilson: “I grew up in Detroit, and I understand having a vibrant downtown. I think we have a tremendous opportunity with a billion dollars going into this project.”

Mayor R.T. Rybak: “This is an amazing collection of brains.”

City Council Member Diane Hofstede: “I believe strongly in the City of Minneapolis.  I was born and raised in Northeast.  To be a first-class city, we have to invest in infrastructure.”

David Fields of the Elliot Park neighborhood: “This is a great opportunity for revitalization.”

City Council President Barb Johnson: “What I want to make sure of is, when we come back and look in 10 to 15 years, that there is associated development around the stadium.”

City Council Member Sandy Colvin Roy: “This investment by the public is going to be here.  Minneapolis can’t be ignored and this investment we’re working on now can build on that.”

Cathy Rydell, executive director of the American Academy of Neurology: “I tend to view this stadium as a change agent.  I’m anxious to be part of it. I’m curious.”

Craig Taylor, executive director of the Office of Business and Community Development at the University of Minnesota: “I would be remiss if I did not admit that I am a diehard Vikings fan. I see this as a great opportunity for our community and the economic impact of the jobs.” 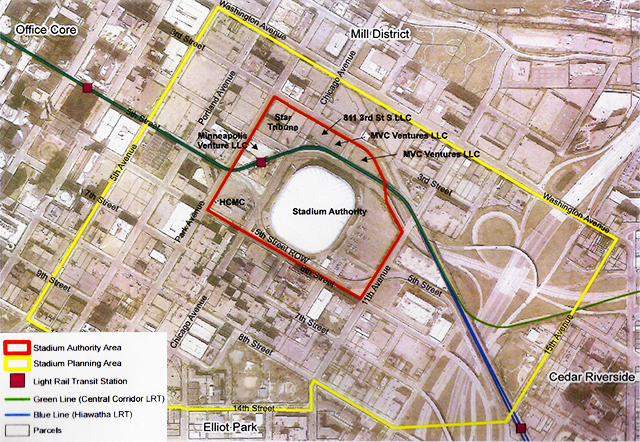 Department of Community Planning and Economic DevelopmentThe area outlined in red is the official site of the new stadium as defined by state statute and will be the focus of the Metropolitan Sports Facilities Authority. The area outlined in yellow surrounding the site will be one of the focuses for the Stadium Implementation Committee. The yellow boarders can be moved to accommodate development. The red borders cannot be moved.

Hennepin County Commissioner Peter McLaughlin: “We tried to make the Twins ballpark a part of the community. We have to use this infrastructure as a catalyst for the area around the stadium.”

Sarah Harris, formerly of the Downtown Improvement District: “The great cities of the world are great because of what’s happening downtown.”

Chris Ferguson, business owner, referring to the stadium and light rail in downtown:  “We only get a certain number of billion-dollar bullets. We get two.”

Rolf Engh, general counsel for Valspar: “We’re a neighbor. When I first went there, we had barbed wire around the building with cut glass on top of that.”

Tom Meyer, architect: “I think this group has talent.”

Wade Luneberg, Hospitality Union, Local 17: “Before we say goodbye to an old facility, I’d like to say it’s been a great venue for the workers.”

Hussein Ahmed, executive director of the West Bank Community Coalition: “This is a great opportunity for all Minnesotans and important for the small businesses in the area.”

Judith Yates Borger, downtown resident and a former reporter who is originally from Detroit: “My job here is to represent the residents of downtown.”

Council Member Betsy Hodges, who was opposed to the stadium: “I want to help make sure we get the best possible outcome.”

Cory Merrifield of SavetheVikes.org: “I’m here to represent the Vikings fans, and I want to make sure this facility is used year-round.”

Peggy Lucas, Brighton Development Corp.: “This is a once-in-a-lifetime chance.”

Co-chair Tom Fisher, dean of the College of Design at the University of Minnesota promised, via speakerphone, to bring his experiences as a designer to the process.