The parking lot across the street from Ricky Kazee’s vintage clothing shop in northeast Minneapolis looked like the perfect place for a flea market. And he had picked the perfect day because Sundays were always the slow day on 13th Avenue Northeast.

Kazee had 20 vendors signed up for the flea market. They had worked on publicity. They had asked someone at City Hall if they needed a permit and thought the answer was “no permit required.”

Things were going great — and then they got some not-so-great news.

“The city came out and said flea markets are illegal,” said Kazee. “I was surprised.  I was bummed out because it was going to happen in two days. I was shocked.”

He was shocked again on the scheduled day of the flea market. He put a note on the door of his store, Fried Bologna Vintage, explaining the cancellation. And then a crowd of people arrived to shop.

“It was one of our busiest days ever,” said Kazee. “People came down who had never been to this street before.”

Flea markets, defined as outdoor sales of merchandise, are illegal in Minneapolis, but perhaps not for long.

In Minneapolis, residents are limited to two garage or yard sales a year. The city’s garden market ordinance, approved this past spring, limits sales to one day a week for 25 weeks and has rules about signs and the size of a vendors stand.

“I think the biggest surprise since I introduced the ordinance [to legalize flea markets] is people saying, ‘What do you mean they’re illegal? That’s the stupidest thing I’ve ever heard,’ ” said Council Member Gary Schiff.

The flea market ordinance would allow outdoor merchant sales of merchandise and will be modeled after the ordinances that regulate farmers’ markets. City ordinances currently require that non-agricultural items be sold indoors.

The ordinance, which has not yet been written, could limit the annual number of a merchant’s flea markets. It would also deal with matters of lighting, hours of operation and the number of allowable days per season. The city could also ask for a business license fee for flea markets.

Three years ago, Anthony Shane had a two-day flea market with 10 vendors on the parking lot behind his Minneapolis business. He had no idea that he was breaking the law.

“It was hugely popular with the neighborhood.  Everyone loved the fact that there was a flea market,” said Shane. “We sold things a little cheaper than we would in the store.”

As it turns out, one person did not love the flea market. That person took pictures of the crowd and then complained to the city that she was unable to park in front of her house.

“The city threatened us,” said Shane, who said he was told “if we were to do it again, we would be fined and shut down.”

He now sells inside his store, Flamingo’s Divine Finds, which has merchandise from 30 vendors and is open five days a month. Between sales, the vendors are out shopping for merchandise for their next sale. 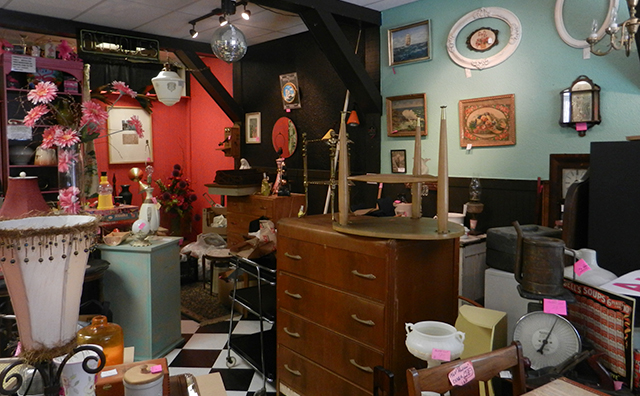 MinnPost photo by Karen BorosFlamingo’s Divine Finds is a Minneapolis shop where 30 dealers in antiques and collectibles sell their wares.

“Every year our figures are growing substantially because of the popularity of people wanting to recycle, repurpose and buy cool stuff,” said Shane. Many of his customers are young people looking for home furnishings they can afford.

“The young people today, it’s fun to see they are appreciating the older stuff and engaging it and collecting it and keeping it, as opposed to going for the new stuff that’s going to be gone in two years,” said Shane. The hot items at his shop are mid-century pieces — items from the 1950s, ’60s and ’70s — and repurposed pieces.

Shane defines “repurposed” as furniture made from other furniture to “create one-of-a-kind” pieces. “Those are very popular,” he said.

So business is good, but having seen a flea market in his own parking lot, he would love to have the option of seeing another.

“This psychology of the flea market is the bargains — that it’s cheap,” said Shane, adding, “And you can dicker with the vendors.”

Flea markets popular in many cities

Schiff points out that flea markets are allowed in many communities in the Twin Cities area.

In St. Paul, for example, flea markets are legal but require a license to buy or sell secondhand goods or antiques, and there is no distinction between indoor and outdoor sales.

St. Paul offers two types of licenses. One license, which costs $72, limits sales to five consecutive days. The other license allows 12 sales exhibitions at a single location annually for a fee of $178. The city also limits the number of garage sales, or sales from a dwelling, to three a year.

Schiff expects to see flea markets become legal in Minneapolis by next spring.

“It gives an opportunity to existing antique stores, vintage stores, re-use stores to present themselves to a broader audience,” he said.