News
Two Cities
This coverage is made possible by a grant from The Saint Paul Foundation.
Sept. 25, 2012

Almost any guidebook for Minneapolis will tell you how to find the Basilica of St. Mary, the Stone Arch Bridge and the Chain of Lakes.

But if you want to know where the first Rapala fishing tackle was made or the location of the first Toro factory, or where the Buzza Co. employed artists to hand-paint greeting cards, you’re going to have to visit Lake Street and the new Museum in the Streets.

Nearly 60 history plaques have been installed along Lake Street between the lakes on the west end and the commercial district at Hiawatha Avenue to explain what made the street so vital to the city ever since the 1870s.

“This was a really vital commercial corridor dating back to the late 1800s,” said Joyce Wisdom, executive director of the Lake Street Council, an association of businesses founded in 1967.

Wisdom got the idea three years ago when she traveled to Ridgefield, Conn., to marry her partner, Helen Pound. Their bed-and-breakfast host sent them on a Museum in the Streets tour, and Wisdom found something she could bring home.

“When I’m on holiday, I’m looking for things I can bring back to my community that will be an asset,” she said. Museum in the Streets, she discovered, is an organization run by Patrick Cardon in Maine. The museums are popular on the East Coast and in France, where Cardon summers.

The Lake Street Museum in the Streets is Minnesota’s first. Each plaque explains, in English and Spanish, the history of what once stood where the reader is standing.

The project has cost the Lake Street Council $140,000 and boasts list of corporate, church and government contributors. Organizers are $8,000 short of their goal, which means Wisdom “will be passing the hat” until it’s paid for.

The “tour” is divided into three sections, each with a map, and is designed to be walked in one day. Or you can walk as much as you want and come back later for more. The idea for the project is obviously a history lesson but also a shopping and dining opportunity. 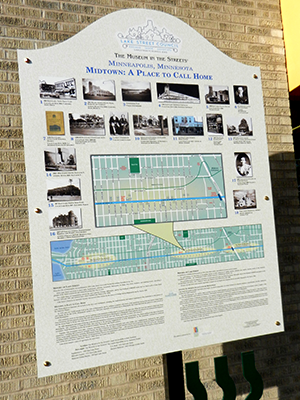 MinnPost photo by Karen BorosMidtown was the location of the first St. Mary’s Greek
Orthodox Church, adjacent to what is now the Midtown
Global Market.

According to the brochure for the Uptown area, early visitors came to the area to fish and seek relief from the heat of the central city. But transportation and electricity brought more development to the area, and by 1929, it had been dubbed Uptown and was filled with restaurants, theaters and unique retail shops.

Midtown was the location of the first St. Mary’s Greek Orthodox Church, adjacent to what is now the Midtown Global Market. In 1928, Sears, Roebuck & Co., attracted to the area by the growth of rail travel, opened its Lake Street store.

The final leg covers the area just to the west and extending east of Hiawatha. There were already six stores in that area when it was annexed by Minneapolis in 1883. One plaque at Hiawatha explains that it was originally a path connecting Fort Snelling with Minnehaha Falls.

“It’s really important for all of us to remember out history,” said Wisdom, who acknowledges that Lake Street also has some history that might not call for celebration. “Lake Street had some dark days from the mid-’60s to the mid-’90s. The mid-’90s were our low point.”

Things have changed.  Wisdom credits a drop in crime and the arrival of Latino and East African immigrants who saw the street’s business possibilities and have revitalized it as a busy commercial street.

“Just because you go through some rough times, you shouldn’t forget everything that brought you to where you are today,” Wisdom said. “I think that’s real important.”