News
Two Cities
This coverage is made possible by a grant from The Saint Paul Foundation.
Oct. 24, 2012

Absentee ballots in Minneapolis have been flowing in, as the city’s staff gears up for Election Day.

“I’m flabbergasted about how many ballots we’re getting,” said Dani Connors-Smith, who has been working on elections in Minneapolis since 1988. Every day a Post Office bucket full of ballots arrives at her desk.

Four staffers work on elections year-round in the state’s largest city, but the number grows substantially as the election draws near with many “seasonal” staff members who return election after election to help get Minneapolis votes counted.

“On Election Day, we are the largest city department,” said City Clerk Casey Carl, who counts more than 2,500 people — including all the election judges in precincts — who are needed to make the voting system work. And the task starts much earlier, with work in February and March to line up needed staff and, later, arrange for election judge training.

Folks who run elections in Minneapolis think they are seeing an increase in the number of absentee votes cast in this year’s presidential election, although there’s no direct comparison with 2008 because of the expanded voting period.

The elections crew thought the extra 16 days of voting would give them a steady flow that would be easier to manage, but that hasn’t happened.

“It came in hot and heavy from the get-go,” said Grace Wachlarowicz, the assistant city clerk in charge of Elections and Information Management. In 2008, 17,100 absentee ballots were cast, she said. By last week, Minneapolis already had sent out more than 8,000 absentee ballots.

“If we progress at this level, I speculate we will supersede that 17,100,” she said.

When the ballots come in, they are first inspected to make sure the voter has successfully completed the outer signature envelope. If not, another ballot and another set of voting instructions are sent back to the voter.

A team of two people then take the accepted ballots to a locked holding room where they will stay until 5 p.m. on the Friday before the election — when the counting can officially begin.

“No one person is ever alone with the ballots,” said Wachlarowicz.

During the first 18 days of voting in Minneapolis the city received 2,707 completed absentee ballots in the mail. Another 11 were dropped off by the voter or agent, and 402 citizens have come to City Hall to fill out their ballot.

A note of clarification: There is no such thing as “early voting” in Minnesota. All votes cast prior to Election Day are considered absentee ballots.

Carl points out a woman called “Up, Down and All Around Mary,” a seasonal worker assigned to taking voting teams to health care facilities. She is Mary Gorzycki. Her nickname comes from the many places around City Hall where she has set up shop in her years of election work. This year, she’s up in the clock tower.

There are also votes coming in from overseas — and not just from those in military uniforms. Under the Uniform and Overseas Citizens Absentee Voting Act, Hennepin County has so far forwarded 1,420 ballots to Minneapolis.

This year, because of redistricting, election officials are particularly concerned about the ability of Minneapolis voters to locate their polling places.For the past 10 years, there have been 131 places to vote, but this year that number has been cut to 117, and ward and precinct boundaries have changed.

Registered voters were sent postcards in July explaining their new polling place. If that card came back to the county as undelivered, the registration of that voter might be challenged.

Voters will learn if their status has been challenged on Election Day when they arrive to vote. There is a process that will allow the judges to change voters’ status at the polling place.

But it is easy to check ahead of time and find the proper polling place, vote absentee or track an absentee ballot. Go to MNVotes.com which is a voters information page established by Secretary of State Mark Ritchie. This site will also let you view a sample ballot for your ward and precinct.

Absentee voting continues until 5 p.m. Monday, Nov. 5, the day before the election. 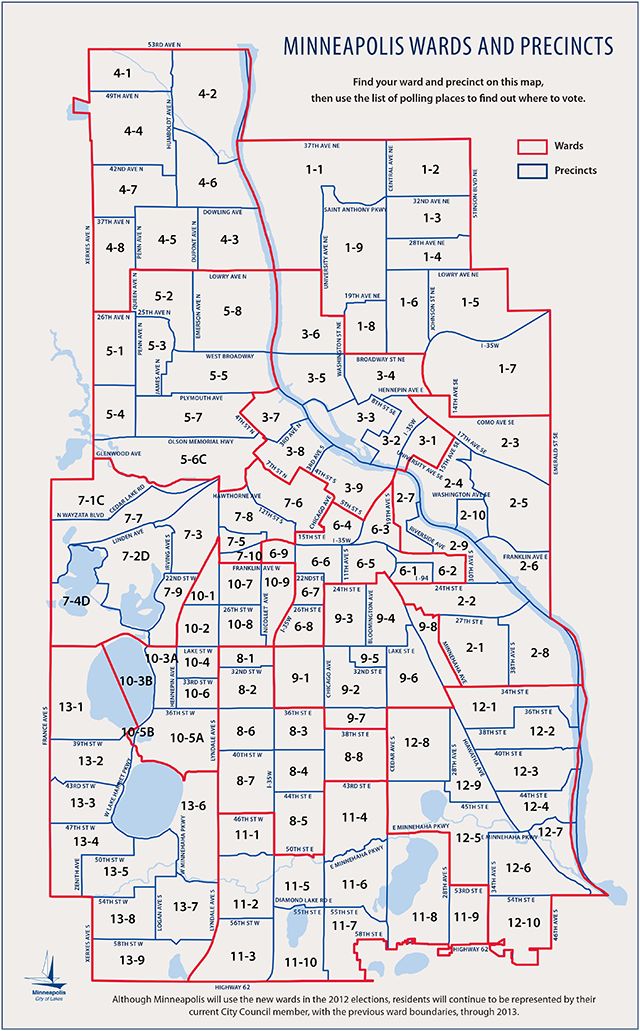