News
Two Cities
This coverage is made possible by a grant from The Saint Paul Foundation.
Dec. 20, 2012 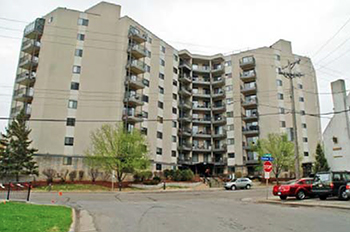 Three lending institutions said “No” to applications from residents seeking financing to repair water damage at the Calhoun Place Condominiums in Minneapolis.

The building was constructed in 1987 as an apartment building with an exterior layer of foam insulation covered with synthetic stucco, but the calk that held it all together was failing and water was leaking into the interior.

When the building was converted to condos in 2004, the new owners received a $400,000 settlement for water damage from the developer, but that was not enough to make repairs and stop the leakage.

“When we started looking for money, it was the worst time,” said Rubin.

Residents of the 107-unit Excelsior Avenue building were stuck. The real estate market was diving into foreclosure mode, and the estimated cost of repairs totaled more than $2 million, or slightly more than $20,000 per unit. Two-bedroom condos in the building are currently on the market for $167,000 to $189,000.

“This is not high end,” said Council Member Betsy Hodge, who represents the area. “This is housing for middle class folks in the City of Minneapolis.”

Residents came to see Hodges about the possibility of establishing a Housing Improvement Area, which has not been done before in Minneapolis. It would allow condominium and townhouse associations that have been turned down by private lenders to seek public financing for building repairs through the city.

“To their credit, they came with a plan,” said Hodges. “They told me, basically, that the exterior of the building was falling apart and needed replacing, that the residents couldn’t afford it on their own and that the banks were turning them down.”

After a Housing Improvement Area is established, a city can lend available funds, or sell general obligation bonds, to finance the repairs. Homeowners repay the money, and in this case, all of the costs associated with the sale of bonds, through a process similar to a special assessment on their property tax payments. This is a financing tool not available to owners of rental property.

“The city is the stop of last resort,” said Hodges, noting that it is an expensive option, with the residents taking all of the risks usually carried by the lending institutions. “It struck me as something that would not only be useful in this situation but could be another tool in the tool box for handling foreclosures.”

To be eligible for Housing Improvement Area financing, 75 percent of the owners must file a petition requesting assistance. So far, 85 of the 107 owners have signed on, satisfyingthat requirement.

“Government should be involved in housing where there’s market failure,” said Council Member Lisa Goodman, who chairs the Community Development Committee. “Our role is to intervene when no one else will,” she said.

“This is not a subsidy,” said Goodman. “In fact, this is costing them a lot because they are paying bond issuance fees, they’re paying back the money, penny for penny plus interest, and they’re putting up their homes as security.”

The process of establishing the HIA has already started. Once approved, the repairs can begin.  That will include pulling off the entire skin of the building, replacing windows and balcony doors and repainting railings and other metal.

Work is expected to begin in April and be completed by October.