News
Two Cities
This coverage is made possible by a grant from The Saint Paul Foundation.
Jan. 4, 2013

After Thursday morning’s announcement that the store will close this spring, city leaders cautioned that it will take time to find the right  way to either reuse the hulking, five-level fortress or tear it down to build something: maybe mixed use with retail on the ground and housing above.

For it’s likely to take years to find a way reuse the hulking building, or tear it down to build something else: maybe mixed use with retail on the ground and housing above.

The end of the 50-year-old store, formerly Dayton’s, comes at a time when downtown St. Paul faces several other gargantuan “reuse” projects, including the Post Office Building and the old West Publishing buildings on Kellogg Avenue, along the Mississippi River.

Mayor Chris Coleman prefers to take a broad view, noting the positive things downtown has seen: the renovation of the Union Depot and a resurgence in Lowertown that includes housing, restaurants and bars and the coming light rail line and Saints minor-league ballpark.

“Macy’s is a remnant of a downtown that hasn’t existed for a long time,” Coleman said Thursday afternoon.

He said there’s no knowing, yet, what might come next for the Macy’s block between Wabasha and Cedar streets, at 6th Street.

“We’re not precluding anything; we’ve not specifically discussed whether another retail might come in, and it’s not an obvious opportunity for housing, but we’ll have some great opportunities,” the mayor said.

Matt Kramer, president of the St. Paul Area Chamber of Commerce, is on board with the upbeat outlook, too.

“We’re going to stay positive, despite the difficulties,” he said.

“But in reality, this is a hit; we’re no longer going to have a retailer downtown. That’s a reality. But it would have been worse, if it had been a surprise,” said Kramer, who previously was chief of staff for former Gov. Tim Pawlenty.

“On the first day I came to this [Chamber] job more than two years ago, they were already predicting when Macy’s would close. So we knew it was coming.”

And he says there’s upside in that the economy is very different in St. Paul than it was 10 years ago, when city officials made a deal with department store owners: a city loan for $6.3 million to renovate and clean up asbestos would be forgiven if the store stayed open through 2012.

Three days after that end date, Macy’s officials announced the closing. (City officials say they had a week’s warning of the closing, but it didn’t leak to the media until Wednesday.)

Kramer said the Macy’s block has two advantages for a bold developer: It’s easily acquired from one owner (Macy’s), with no other tenants to displace. And it’s just a block and a half from one of the light rail stations, which come online in 2014.

Mixed use one possibility

“The light rail is a huge positive; it’s speculative, but I can see some mixed use coming out of this, following what’s happening in Lowertown and downtown Minneapolis,” Kramer said.

“And I guess we’ve all come to the same ‘Aha!’ moment, thinking about another large retailer based 10 miles west of here. Yes, wouldn’t it be great if Target opened one of its urban stores in downtown St. Paul.”

The Macy’s building, more than 350,000 square feet, is far too big for an urban Target, or for most other uses, though. So Kramer thinks eventually it will come tumbling down to make room for a new building or buildings.

“Whatever it is — retail, housing, offices — it will take some time,” he said.

Neither Kramer nor Coleman are keen on using public subsidies, though, to fill the Macy’s void.

Coleman said there’s already been a huge public investment in infrastructure for the area, with light rail and the Depot renovation, that provides a platform for private investment.

Kramer said the Chamber wants government to be a supporter of downtown investment, with planning and zoning assistance, and maybe a catalyst for some development, but not a major funder. 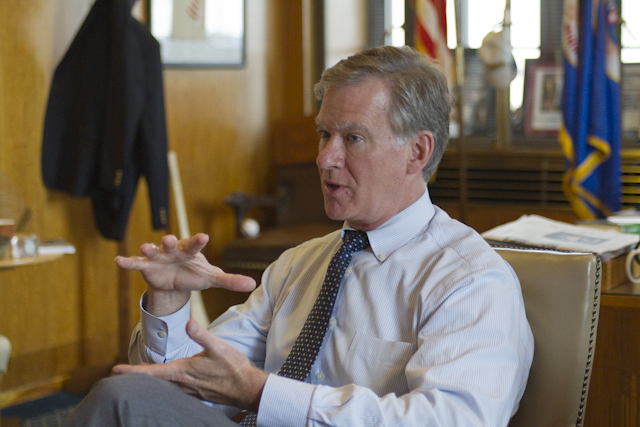 MinnPost photo by Terry GydesenMayor Chris Coleman: “Macy’s is a remnant of a downtown that hasn’t existed for a long time.”

The timeline for the end of the Dayton’s/Macy’s era is set, though. Jim Sluzewski, a spokesman for Macy’s in the Cincinnati headquarters, said the River Room restaurant inside the store will close at the end of January, with no plans for its relocation.

He said he doesn’t know whether the Starbucks outlet in the store will relocate.

The rest of the store will be open with a clearance sale, probably through March, before closing for good.

St. Paul is one of five stores around the country to be closed this year, in a “normal course adjustment,” he said. The company is also opening nine stores nationwide.

“It came down to the amount of business we were doing; it wasn’t sufficient in St. Paul to keep it open,” Sluzewski said.

(As for the downtown Minneapolis Macy’s, which has an even longer history than St. Paul, Sluzewski said: “It’s business as usual there. There are no plans to close any other stores.”)

City, Macy’s to work together

Cecile Bedor, St. Paul’s Ddrector of Planning and Economic Development, said a Macy’s official is coming to town later this month to meet with the mayor and others “on disposition” of the store.

Macy’s owns the building and will hire a broker to market it, she said.

“Macy’s has explicitly told us that they will work with us on redevelopment,” she said. “We want to make sure this site is developed to its absolute potential, and will work with Macy’s to achieve that goal.”

The challenges with the Macy’s building might appear similar to another major St. Paul “opportunity”: the Ford Plant.

In another case of a legacy company clearing out of town, Ford closed its 89-year-old Highland Park neighborhood assembly plant in 2011, and is in the process of tearing down the buildings and cleaning up the grounds for a sale.

Task forces and committees have met for several years, looking at ways to best reuse the 122-acre site on the Mississippi River. The timeline for that project presumes a sale no earlier than 2015.

Mayor Coleman said there are some comparisons:

“Both are vestiges of an important part of St. Paul’s history, and it’s hard to say goodbye. We’re concerned about the employees whose jobs are impacted, but the reality is that at the Ford site, as at Macy’s, the potential is so great and we’re ready to move.”

Planning Director Bedor agreed: “While Macy’s is very different from Ford in terms of scale, location, etc., both  sites present significant redevelopment opportunities for higher and better use.”