News
Two Cities
This coverage is made possible by a grant from The Saint Paul Foundation.
Feb. 6, 2013 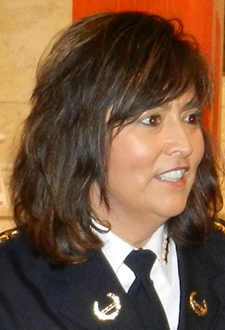 Introducing President Obama on Monday was a big deal, according to Minneapolis Police Chief Janee Harteau, but not as important as hosting training sessions for the entire Police Department in the two days since.

“This is a pivotal point for the Minneapolis Police Department and for the city as a whole,” Harteau told reporters at a news conference before Tuesday’s first meeting.

She has been thinking about these training sessions since last spring, when Mayor R.T. Rybak announced his intention to appoint her chief. “I want to make sure I get this right,” she said.

To get it right, all sworn officers were asked to attend in uniform, and days off were canceled.  Half of the department — and that includes civilian employees — attended a four-hour training session Tuesday, with the second session Wednesday.

The sessions, she said, will have no impact on answering 911 calls and “very little impact” on the department budget.

“The service and guiding principle that I will be asking of every officer, in every encounter, is: ‘Did my actions reflect how I would want my family member to be treated?” Harteau said.

She offered assurances, though, that officers will not be soft on crime or step back from using force when necessary.

Harteau does not recall any training sessions aimed at the entire department and focused on law enforcement practices. The last major training initiative was in 1997, when then-Chief Robert Olson held sessions focused on new technology.

Her goal is to “set the tone, set the vision, set the direction and set the course” for the years ahead and make sure everyone knows what role he or she plays in the process. “There are no small parts,” she added.

“The goal for today sets the tone for the Minneapolis Police Department moving forward — not just doing great things but us being great while we’re doing them,” said Harteau.

The sessions will include her guidelines for commitment, integrity and transparency.

“I’m going to hold each one of them accountable, but no one more accountable than myself,” she said.

The chief said she asked people to attend in uniform to remind them of their role and to send a message that appearance is part of professionalism. She also will be asking officers to address each other by rank as a sign of respect.

“The members of this Department cannot think, ‘I’m doing this for show,’ because it is not for show, I assure you,” said Harteau, explaining why the news media would not be allowed to sit in on the training sessions.

One item she wants to focus on is the legacy that will be left behind by the 64 percent of department employees in their 40s who are nearing retirement.

In the next decade, more than 500 of the current 840 officers will be eligible for retirement. She sees the department’s new training division as an opportunity to use the knowledge of veterans to build a strong department for the next generation.

“We have a lot of hiring and recruiting opportunities, and we need to make sure we do that right,” Harteau said. “We need to set the tone for the next generation.”.

The chief hinted that changes also might be coming in community relations and communications but did not share details. She did say she would like to see more news stories about the good things done by department members.

“We do tend to see the negative stories on TV, and I’m not saying we shouldn’t see those and they shouldn’t be highlighted,” she said. “But each and every day the men and women of this Police Department do incredible things, and I want to highlight those as well.”

Harteau described the Police Department, where she has worked for more than 25 years, as “certainly not broken,” but yet to reach its full potential.