News
Two Cities
This coverage is made possible by a grant from The Saint Paul Foundation.
March 28, 2013 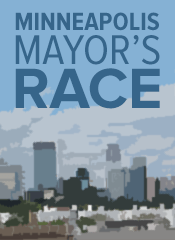 The first debate by candidates for Minneapolis mayor played to a full house Wednesday as five DFL contenders outlined their views on such issues as the Vikings stadium, property taxes and plans to revitalize North Minneapolis.

The sixth mayoral candidate, Cam Winton, was excluded because he is not seeking political endorsement.

The debate gave participants an opportunity to define their differences and their plans, should they be elected.

Overall, it was an orderly process until near the end, when the discussion turned to public safety.

That’s when the two candidates living in North Minneapolis explained how their neighborhood faces a bit tougher life than that around the Lakes area.

“I would venture to guess that nobody else on this panel has been through a burglary, huddled in a closet waiting for the police to come,” said former City Council President Jackie Cherryhomes. “No one else has had a murder in their block. No one else has had to explain to their daughter why someone was running down the street with a gun in front of their house. Crime is real, and it affects all of us.”

“I’m almost unable to contain myself when I consider the conditions that some of our community members and children live in,” responded fellow north side resident, City Council Member Don Samuels. “I’ll just say to Jackie, I can match you story for story. My life has been threatened about five times.”

“I can’t take it,” Samuels said. “This is America where you are supposed to have a right to liberty and life and the pursuit of happiness.”

Public safety was not the only question about the future of North Minneapolis. Candidates were asked to outline their plans for the area, which also was hit hard by the recession and a tornado.

“As somebody who has an urban planning background, I understand that North Minneapolis is not a blank canvas that the mayor is going to put ideas into,” said Council Member Gary Schiff. “This has to be worked on with the community in building coalitions.”

The last two budgets in Minneapolis have produced relatively small property tax increases after years of bigger ones. Candidates were asked to make a commitment not to raise property taxes as mayor.

No one took the pledge, but all had something to say about taxes.

“I am not the least bit interested in raising property taxes,” said Cherryhomes. “It’s not an option for me.”

“No one has been more committed to alleviating our property tax burden than I have,” said Hodges.

“They [the city] have cut programs, they have raised property taxes,” said Andrew. “The city is behind on innovation, it is behind on service re-design and these problems have festered for a long time.”

“We need to create a local sustainable economy,” said Schiff, “that includes making it easier for small businesses. Let’s stop the large subsidies to retain developers, the failed Block E and the Vikings Stadium.”

“I will make a commitment, that as mayor, I will make every effort to make sure we do not add to the burden of taxes,” said Samuels. “The pain is now at a 10 and we can’t pile on anymore.”

The stadium question was framed to give candidates an opportunity to say they would back out of the deal, seek changes to the deal or talk about what they like in the plan. The respondents covered most of the options.

“There’s a lot to not like about the stadium deal,” said Andrew, who opposes the financing, the location and the amount to be paid by Minneapolis taxpayers. If elected, he would go back to the Legislatureto try to revamp the financing package. But there is one thing he does like.

“My fear is that somewhere down the road they’re [the state] going to come knocking on the city’s door and say, ‘We need you to kick in more to save the stadium and save the Vikings,’ ” said Hodges. “When I’m mayor, the answer will be no.”

“Nobody fought harder against this deal that takes money out of the hands of working-class people and gives it to a billionaire team owner,” said Schiff, who noted that the financing package isn’t working and, in his opinion, will need to be changed.

“We’ll have an opportunity to elect a mayor this November that will speak up for the taxpayers of Minneapolis and make sure Minneapolis gets a better deal,” said Schiff. “This is the Minnesota Vikings, not the Minneapolis Vikings.”

“It was clear to me that the stadium was going to be built, the state was going to pass a bill to build a stadium and Minneapolis was going to get run over or get on board,” said Samuels ,who decided to get on board because he saw the opportunity to create jobs.

“From the very beginning, for me, in the greatest recession since the Great Depression, that we create jobs was the best opportunity for the creation of employment for the one in four union workers sitting on the bench, and the incredible unemployment rate in my community,” said Samuels. “I have no regrets about this.”

“The fact of the matter is the building of the Vikings stadium is a job creator and a jobs tool,” said Cherryhomes. “The commitment there is to hire 33 percent of people on the job being women or people of color. That’s extraordinary. That’s something that’s never happened before in a public venue in our state.”

The candidates were asked to name the skill set they will bring to the office of mayor.

Schiff: “My skill is my experience in advocating for jobs for the people who live in my community.”

Samuels: “I made a condition of my cooperation [on the stadium] that the state live up to the city levels of parity by hiring minorities and women at 32 percent.”

Hodges: “You have to know how to fight and win. I’ve done that.”

Andrew: “I have the experience to put together and collaborate with the people who are going to make decisions.”

Independent candidate Cam Winton, who will be part of a League of Women Voters Debate April 3, watched his opponents from the audience instead of sharing the Cowles Auditorium stage at the University of Minnesota’s Humphrey School.

To political science professor Larry Jacobs, who moderated the debate with his students, the focus on the five DFL candidates was a logical place to begin. He said he would feature Winton in a future forum.

“This is the beginning,” said Jacobs. “The DFL endorsing process is going to be very competitive and it begins very shortly. This is a start to look at those leading DFL candidates.”