News
Two Cities
This coverage is made possible by a grant from The Saint Paul Foundation.
April 4, 2013

Two giant breweries dominate their neighborhoods in St. Paul: the Hamm’s Brewery on the city’s East Side and Schmidt on West 7th Street.

They’ve been a challenge for city developers for years, lurking symbols of a golden hops age when the city was a major beer producer with sprawling breweries anchored by massive brew houses, washing houses and hops-storage containers.

Finally, though, Hamm’s and Schmidt are making it to the list of St. Paul accomplishments as developers find  new uses for most of those historic examples of the city’s big brewing past.

In his campaign kickoff speech this week, Mayor Chris Coleman talked at length about how the breweries are seeing new life, as the city continues its tradition of historic redevelopment.

“For years we wondered, how can we ever do anything with them? But now we’re finally finding some great new uses,” Coleman said in an interview.

At Hamm’s (later Stroh’s) — on Minnehaha Avenue, just off Payne Avenue — private developer Howard Gelb has long owned the northern set of buildings. After a huge infusion of cash to clean up the buildings and the site in the late 1990s, the business park has been home to a variety of businesses, including a hospital linen laundry and a new trapeze school.

But the southern set of Hamm’s buildings — including the bigger, harder-to-reuse brew house and stock house — belong to the city and have long been vacant and an eyesore. Finally, though, there’s now at least some action. An “urban farm” operation, Urban Organics, is installing equipment to raise fish and grow lettuce indoors, using water from the old brewery well. And city officials say a deal is brewing with the Flat Earth Brewery, now located in Highland Park, to expand into Hamm’s and start production by the end of the year.

At Schmidt, which had a brief incarnation as the Landmark Brewery and then churned out ethanol for several years, the emphasis has been on housing. A promising project in the mid-2000s fell apart with the housing bust, but construction is now underway on 250 rental units, being marketed as the Schmidt Artists Lofts.

The Hamm’s Brewery dates back to 1865, when Theodore Hamm took over the brewing operation near Swede Hollow, atop an artesian well. During Prohibition the plant produced soft drinks, but returned to the beer business in 1933. During its prime years, the 1950s and ’60s, it was a major employer on St. Paul’s East Side, and it became the Stroh’s Brewery in the mid-1980s before closing in 1997.

The Schmidt Brewery on West 7th was started in 1855 as the Cave Brewery, but Jacob Schmidt’s family took it over in the early 1900s. The Minnesota Brewing Company took over in 1991, brewing Landmark and Pig’s Eye, but stopped production in 2002. Ethanol was produced there for several years, bothering neighbors with the smell. Except for the sale of the water from the underlying aquifer, the site has been unused since 2004.

Reusing the breweries hasn’t been easy, for the most part.

The most easily re-purposed were the northern buildings at Hamm’s, which make up the Howard Gelb office park. They were mostly warehouse and handling structures which, with some cleanup and updating, have worked for other businesses.

Still, there were issues, even there, said Dan Kuckler, manager of Everest LLC, the Gelb company that runs the business park.

Stroh’s closed the plant in 1997, taking little with them and leaving the rest to Gelb’s team to clean out.

“We had some major challenges in the beginning, with some additional storm sewer-sanitary sewer separation. And it required all new electricity and gas services. Quite a bit of money was spent in preparation before tenants could even move in, including new asphalt and holding ponds,” Kuckler said. A few buildings were torn down, but 10 remain on that northern chunk of the brewery.

The newest tenant, Twin Cities Trapeze Center, is owned by Katie and Jake Kimball, my daughter and son-in-law. They teach high-flying lessons in an old brewery warehouse that had the 40-foot-high ceilings they needed to hang their trapeze rig. Another long-time tenant, Books for Africa, recently moved its warehouse out of the Hamm’s area to St. Paul’s Midway area. Kuckler said vacancy of the park is now about 40,000 square feet, out of a total of 300,000 square feet.

And he said he’s lost a couple possible tenants for aesthetic reasons: They didn’t like having the other large Hamm’s buildings across the street sitting empty and appearing dilapidated.

Finally, though, there’s good news on the southern side of Minnehaha, the brewery buildings owned by the city. 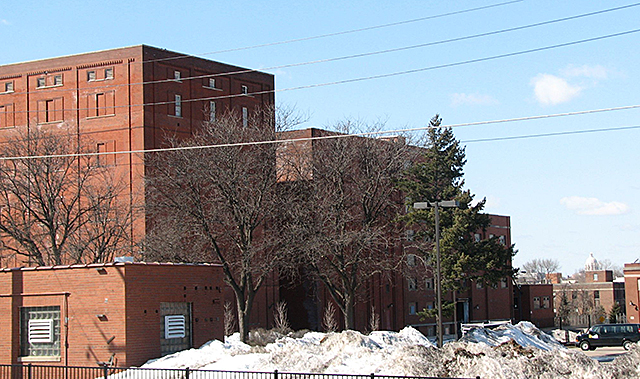 MinnPost photo by Joe KimballAfter a huge infusion of cash to clean up the Hamm’s Brewery buildings and the site in the late 1990s, the business park has been home to a variety of businesses.

For years, the big hope was that those buildings could be converted into an Asian Pacific Cultural Center. The proposed $18 million projected would have transformed the brewery buildings and been a big draw for the East Side neighborhood.

Twice, the Legislature agreed to devote bonding money to the cultural center and twice then-Gov. Tim Pawlenty vetoed the project.

So that plan was abandoned, leaving the city at square one. Until now, with the store house being renovated  by Urban Organics, which has a purchase agreement with the city that is expected to close soon.

And officials are working with other tenants in deals that could continue the city’s alcohol tradition.

Dave Gontarek, the city’s project manager, said Mill City Distilling is looking at a two-story building on the site as a place to make corn whiskey. The former blacksmith shop is in tough shape, but the goal is to start cooking the mash there by Labor Day.

And the Flat Earth Brewery, which has outgrown its Highland Park location, is looking at moving into Buildings 7 and 8, overlooking Swede Hollow Park. Those buildings are described as the former keg house and horse stable.

If all the financing and incentives go through, there might even be a beer garden on the site, Gontarek said.

But there’s lots of work left for the city’s side of the Hamm’s site. Over the years, the buildings were expanded in utilitarian ways that almost defy renovation. Some floors are slanted in some buildings, to make it easier to roll beer kegs downhill to their next station.

And electricity and utilities must be re-established, asbestos removed and a road added.

At the West 7th Street site of the Schmidt Brewery, there’s another factor at work: historic preservation. With the iconic brewery’s historic designation, developers can’t mess with the look of the exterior of the building. That complicates construction, particularly when it’s time to put in new windows, which weren’t always needed in a brewing operation, but are absolutely necessary for housing.

But the government credits that come with the historic preservation are also the only way that developers could afford to take on such a massive project.

Dominium, a national developer, is now building 250 rental lofts in the brewery’s old brew house and bottle house, which should be completed by the end of the year. The first two reservations have just been accepted.

Dominium is also constructing a dozen new townhouses on the grounds.

The historic preservation credits, from the federal and state governments, are key to the Schmidt effort, said Owen Metz of Dominium.

“Without the federal historic credits, and more importantly, the state credits, this project wouldn’t be feasible,” he said.

About one-third of the $120 million project is covered by the preservation grants, he said. And the project was also helped by low-income housing grants. City help and county clean-up funds also propelled the effort.

Still, converting the massive buildings has been difficult, he said.

“There are generally no structural issues with brewery buildings; they eventually may become obsolete, but there usually aren’t structural issues,” he said. “They’re heavy-duty and overbuilt.”

But there have been many negotiations with preservationists over adding windows so that the newly renovated lofts have natural light and fresh air.

The goal, he said, is to keep the exterior looking like it did in the early 1900s.

The neighborhood is thrilled with the coming renovations, said Diane Norquist of the city staff.

“It had been sitting vacant since 2002 and was a real eyesore,” she said.

In addition to the Dominium project, the West 7th/Fort Road Federation, the city’s local district council, is working to develop the Rathskeller and keg house into office space and a restaurant.

And Bruce Hendry, the former owner, held on to a warehouse on the brewery grounds, and there’s been talk of converting it into a brewing incubator — again, keeping the beer-making legacy alive on the site.

One change at the brewery that many anticipate is the eventual return of a glowing and flashing of the SCHMIDT sign that will extend across catwalk atop the complex and be visible for miles.

The old Schmidt sign was taken down and replaced with an unassuming, non-flashing LANDMARK sign in the 1990s.

The developers will install a replica of the old sign that looks the same but has energy-efficient LED bulbs, Metz said.