News
Two Cities
This coverage is made possible by a grant from The Saint Paul Foundation.
April 4, 2013

A new candidate for mayor of Minneapolis made his public debut at Wednesday’s League of Women Voters debate, bringing the number of official candidates to seven. The session was also the first candidate forum to include independent Cam Winton.

The new candidate, Jim Thomas, is a teacher in the Minneapolis school district who has never run for public office. He filed Friday with the Hennepin County Elections office to form a campaign finance committee.

“I want us to have a larger discussion about education in Minneapolis,” Thomas said in explaining his candidacy. He did not waste time being shy.

After Don Samuels mentioned in his opening remarks that he had arrived in the United States with $83 in his pocket, Thomas was ready with a response.

“I was born in Minneapolis at Swedish Hospital, and I can beat Don,” said Thomas, kicking off his opening statement. “I had no money in my pocket when I arrived in Minneapolis,” he said, drawing a laugh from the standing-room-only crowd at Solomon’s Porch in south Minneapolis.

“I work as a special education teacher, and I have a unique vision and knowledge of the workings of the public schools,” said Thomas, who is a DFLer. “There is some discussion, I think, I really want us to have regarding charter schools, regarding class size, regarding testing.”

“You know, some of these folks emphasize their expertise in business and I think, when I’m mayor, I’ll hire some of these people as consultants,” he said, drawing another laugh from the crowd.

Winton also wasted no time in jumping into the fray. He is also a first-time candidate and a Republican, but he is not seeking the endorsement of any political party. 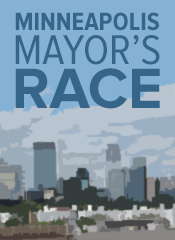 The first question for the panel of candidates focused on the Hennepin Energy Recovery Center, which is where the garbage gets burned to produce electricity. Minneapolis has been asked to approve an increase in burning. Candidates were asked if they agreed to an increase.

“I don’t think we should increase the amount we’re burning at HERC,” said DFLer Betsy Hodges. “I do understand there are arguments being made that the particulate emissions are acceptable. I disagree.”

“As mayor, I would sponsor a zero-waste planning initiative,” said DFLer Gary Schiff. “That is the only way we can move forward and become a truly sustainable green city,” he said.

Winton said: “It is insulting to our community, to every resident of our city, that the company that has the contract for the HERC burner, the company that makes money taking our garbage and burning it there, would ever come to the City Council, as they’ve done, and ask permission to increase the burning, and therefore emissions, without first doing an Environmental Impact Statement.”

“The Legislature mandated the county to get out of the landfills because all of the landfills were leaching toxins into the ground,” said DFLer Mark Andrew, who served on the Hennepin County Board, which built HERC. “This is the biggest and most successful energy project in the history of the state,” he added, saying he would want to look at studies of the emissions before making a decision.

“We should be sharing the pain of whatever technology we’re using,” said Thomas. “If at this point, we have this much in pollutants coming into our community, and we need more burning, we should be building a facility somewhere else, not in Minneapolis.”

“The fact of the matter is that everybody in this room knows you’ve got stuff you can’t get rid of and it’s got to go somewhere,” said DFLer Jackie Cherryhomes. “Its either going to get burned or go into a landfill.”

In the final round of questions, candidates were asked to give one-sentence responses, which proved difficult for most. The first short-answer question dealt with whether ranked-choice voting will affect candidates’ campaigns.

“Yes I do, for the better,” said Hodges.

“Yes. I think what we’ve seen tonight is an example, an end to negative campaigning and personal attacks and a focus on the issues,” said Schiff.

“It will increase participation,” said Andrew. “It will take the fangs out of some of the political discourse.”

“I went through it once and I won,” said Samuels. “I’m going through it now and I’ll win.”

“I’m not seeking the endorsement of any party,” said Winton. “Ranked-choice voting enables me to build a coalition across party lines, people from all walks of life and all parts of our city.”

“Yes, it gives every part of our city much more of a voice in this election and it make is much more fun as a candidate because I don’t have to stop the conversation with everybody,” said Cherryhomes. “I can say, ‘But I could be your second choice.’ ”

With five DFL candidates seeking party endorsement at the June city convention, the candidates were asked if they would abide by the endorsement process.

“I will probably support the endorsement process,” said Andrew, “but I need to hear unanimity from all of the candidates that we are all singing off the same sheet of music.”

“We chose ranked-choice voting for a reason,” said Samuels. “We can rank the contestants and eliminate them ourselves. I think, if I make a good showing, the people deserve to make that choice.”

“Since I’m not running for the endorsement of any party, let me take this opportunity to ask for your vote, your first-choice vote,” said Winton, who noted he’d also be pleased to be  a second-choice vote.

“I anticipate that there will probably not be an endorsement,” said Cherryhomes. “If nobody is endorsed, I will run. If somebody else is endorsed, we’ll have to see what happens with everybody else, but I would anticipate probably supporting the endorsed candidate.”

“I’m a little late into this game,” said Thomas. “I don’t think my chances of getting endorsed are real good at this point, but I want my voice heard, so I want to stay in until the election.”

“When the field is set and the candidates have agreed, I will know the answer to that question,” said Hodges.

“I will abide by the DFL endorsement because I believe in the DFL,” said Schiff.

This was the second forum for mayoral candidates. The first debate, held a week ago at the University of Minnesota Humphrey Institute, featured only DFL candidates.