News
Two Cities
This coverage is made possible by a grant from The Saint Paul Foundation.
May 22, 2013

A Minneapolis house designed and constructed in 1893 by master builder Theron Potter Healy apparently will be saved from the wrecking ball. The process has been a short but rocky road.

First, the Community Planning and Economic Development Department decided the house at 2320 Colfax Ave. S. had no historic significance and signed off on a wrecking/demolition permit. That was in March.

Anders Christensen, an expert on the topic of Healy houses, appealed that decision to the Heritage Preservation Commission, which granted the appeal despite staff advice that the house did not match the definition of a historic resource. That was in April.

Two days later, the property owner filed an appeal of the commission’s decision that was heard by the City Council’s Zoning and Planning Committee. Members there voted 5-to-0 to save the house. That was Tuesday.

The full City Council will consider the matter on Friday, but a 5-to-0-committee vote will be hard to turn around.

Healy built 140 homes in Minneapolis between 1886 and his death in 1906, working for every major architect of the era and designing homes himself even though he was not educated as an architect.

“Healy was a master builder, but the residence at 2320 Colfax has been altered extensively over time,” said John Smoley, a city planner who works with the Heritage Preservation Commission. The house, which has suffered damage in three fires, currently is divided into 15 living units.

The once-open front porch has been enclosed, wood-frame windows have been replaced with aluminum and vinyl, a large addition has been added to the back of the house and a barn/carriage house built by Healy has been removed.

“There are better remaining examples of Theron Potter Healy’s work,” Smoley said. Of the 30 houses Healy built in the Wedge neighborhood, 27 are still standing, including the Colfax house.

Healy built it on his own and sold it to Edward Orth, the son of John Orth, who in 1890 owned one of the four large brewing companies in Minneapolis. (Those breweries merged and ultimately became Grain Belt Brewing.)

The Orth House, as 2320 Colfax came to be known, was a single-family dwelling until 1962, when it was converted to multiple units.

“I’ve owned it since 1991. I bought it after it had been in a major fire,” said Michael Crow, the current owner of the Orth House. “The fire and water damage destroyed all of the eight-panel doors, the baseboards, casings, second-floor fire place, buckled the hardwood floors and destroyed all of the fixtures in the upstairs bathrooms.” 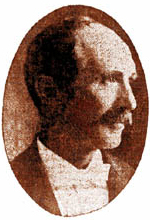 Crow said he has been trying, without success, to sell the house for five years. Currently he has a buyer who wants to tear down the house — and the one next door — to build a four-story apartment building.

“There’s nothing left to restore,” said Crow. “The building was restored back into a nice rooming house, but nothing was done to restore any of the old parts of the house due to the cost.”

Healy built only two houses in 1893, which was a turning-point year for the nation. That was the year of the Chicago World Fair, which introduced the nation to neo-classic architecture. It was also the year of the nation’s worst financial breakdown when 600 banks failed and 194 railroads went bankrupt.

Up until that point, Healy had been building Queen Anne-style houses with intricate woodwork and bright-colored paint. Suddenly people wanted neo-classic design.

“The Queen Anne style, the style that Healy had perfected, was now out of fashion. He must now invent a new style,” said Christensen, noting that Healy built his first new-design house on speculation, and it became his new prototype.

“The Orth House is an original design created in a time of crisis and change,” said Christensen. “In Minneapolis, the name Healy is synonymous with Victorian houses, with exquisite craftsmanship and with elegant design. Healy is our civic master builder.”

Christensen argued that the first floor of the Orth House still contains some of the original woodwork, leaded glass and tiles. The first-floor fireplace also is intact. Outside, the original wood siding is still under the vinyl siding.

“This house can be restored on the outside,” said Christiansen. “Built like a rock, this house is level and straight and true.”

During the five years it’s been on the market, there have been few interested in more than merely taking a look, according to Realtor Tom Dunn, who told committee members he has tried to attract commercial and residential buyers with no luck.

One potential buyer, he said, was interested if the property were eligible for historic renovation funding. It is not.

Another buyer was interested in using the house as a group home for former prisoners.

“You have to see through vinyl siding and vinyl replacement windows,” said Curtis. “Healy is still standing there. When I look at that house, I get the chills.”

Committee Chair Gary Schiff closed the public hearing and immediately moved to deny owner Crow’s appeal. The committee voted unanimously to support the denial, which should block destruction of the Orth House.

“I think this is a signal that this city takes seriously the contributions of Mr. Healy,” Schiff said of the unanimous committee vote.

He plans to move ahead with a proposal to study the Healy houses in Minneapolis and provide interim protection to the structures during the study process.