News
Two Cities
This coverage is made possible by a grant from The Saint Paul Foundation.
May 7, 2013

Minneapolis mayoral candidate Cam Winton demonstrated this week that he is smart enough to know he can’t stand in the middle of the street for very long, even when he wants to stand there to call attention to a pothole.

He also had some very good luck, because the pothole he selected as a bad example was scheduled for repair the same day he decided to hold a middle-of-the-street news conference at 38th and Zenith near Lake Calhoun.

“I’m the first to grant that in a cold climate like ours, there’s going to be a pothole season,” said Winton, who reviewed basic road construction techniques and the freeze-and-thaw cycle to a group of reporters.

The pothole he selected was a beauty — about 5 feet long and, according to a neighborhood resident, at least 4 inches deep.  To Winton, the pothole was an example of the poor condition of Minneapolis streets.

“Our crews had it scheduled to be fixed,” said Mike Kennedy of the Public Works Department, who has been dealing with city potholes and road repair for 20 years.  The repair order was prompted by an April 22  complaint phoned into a 311 operator, according to Kennedy.

“In my view, I don’t think we’ve seen a big pothole bloom,” said Kennedy, who pointed out that the mild winter a year ago gave the city an opportunity for pothole prevention work.

Usually, permanent pothole repairs begin in April, but this year it kept snowing.  Repair crews are out there, but they can’t do their jobs when the potholes are covered with snow.

According to Kennedy, Minneapolis has been “very aggressive” in street repair and replacement in the last five years with 38th Street, home of the bad example pothole, scheduled for resurfacing this coming fall.

Back to the news conference. 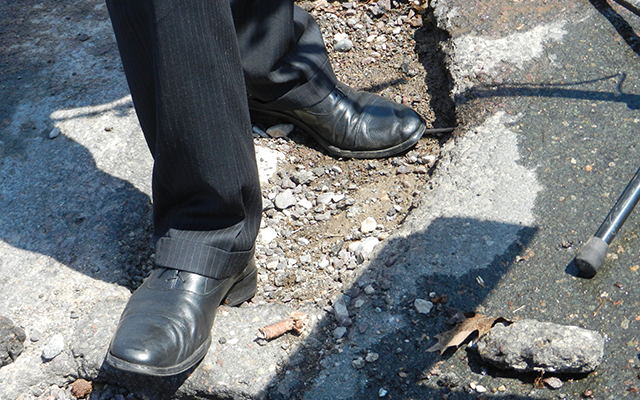 The idea was for Winton to stand in the pothole briefly to make his point and then get out of the street for a question-and-answer session with reporters.

This got a bit complicated because 38th Street was getting its spring cleanup, which started with a bulldozer scooping up leaves and sand before Winton arrived.

After everyone was out of the street and safely on the sidewalk, trucks spraying water, followed by the trucks sweeping the road surface, buzzed the area, forcing the news conference to go silent a few times in deference to truck noise.

“There is no cavalry coming to fix our roads for us,” he said. “It’s going to be up to us in the city to fix them ourselves.”

The city is scheduled to spend $49 million in road paving this year, $22 million of that financed by the sale of city bonds.

To free up more cash for roads, Winton would merge some of the city departments with similar departments in Hennepin County, among them the 911 system, technical support, human resources and finance. Those moves, he suggests, could produce an annual savings of $15 million.

To do this, he would take advantage of an anticipated “wave of retirements,” rather than through layoffs of city workers. He would also look into the possibility of contracting street maintenance to private sources, rather than union crews who work for the city.

Despite the “aggressive” road repair schedule cited by Kennedy, Winton says he is hearing a lot of complaints about condition of the city streets during the two months he has been campaigning.