News
Two Cities
This coverage is made possible by a grant from The Saint Paul Foundation.
June 17, 2013

Campaign T-shirts were the uniform of the day when the first order of business was glad-handing in the lobby outside of the auditorium. After that, DFLers spent the next 12 hours fighting about which candidate to endorse.

As the day wore on, it became obvious that for most delegates, their first choice was their only choice.

When a candidate was dropped from consideration, very few delegates switched their support to someone else. Their second choice was pretty much “go home.”

“It would be a shame if we left here with no endorsement,” DFL Chair Ken Martin told delegates just after the first ballot of the day. “We do not want to sit on the sidelines in this race for mayor.”

In the end, they all went home without an endorsement, ensuring that all six DFL candidates would be in the race all the way to November —and likely prompting others to join Independent candidate Cam Winton in running.

Two candidates  — Mark Andrew and Betsy Hodges — battled throughout the day, with Andrew leading on every ballot but never nearing 60 percent.

Three already had said they would continue running even if the DFL had endorsed a candidate.

Those three — Jackie Cherryhomes, Don Samuels and Jim Thomas — were eliminated on the first ballot when each of them failed to secure at least 10 percent of the vote.

Then came the balloting.

The convention rules required five ballots before a motion to adjourn without endorsement or a vote to have no endorsement could be advanced.

The three candidates who were dropped after the first ballot received a total of 182 votes, or 13.1 percent, of the vote — but those votes didn’t all show up in Round 2. On the second ballot, only 1,280 cast ballots, down 109 from the first ballot.

No one came close on the second ballot, but two of the remaining three gained support.

Schiff finished third, down 4 from the first ballot.

This is where it started to get interesting. Schiff approached a floor microphone and asked to address the delegates. To do that, two-thirds of the delegates had to vote in favor of suspending the rules. A voice vote to suspend the rules wasn’t clear, so a hand-count determined the motion had failed.

There were rumors that Schiff had planned to ask his supporters to back Hodges, a move that could have given her the potential for 725 votes, or 56.7 percent, going into the third ballot.

Instead, Schiff announced from the floor that he was withdrawing from the next ballot and received a standing ovation from the delegates.

There was also speculation that the Schiff delegates wouldn’t move to Hodges, regardless of who asked them and despite the two candidates shared views on progressive politics.

Out in the lobby, Schiff stood on a chair and told everyone he was not dropping out of the race for mayor or suspending his campaign.

“There is a long time to go until November,” said Schiff, who said his second choice for mayor would be Hodges.

“Let’s go get an endorsement,” said Hodges as they headed back to the convention hall to cast the third ballot of the day.

Meanwhile, the Minneapolis firefighters were handing out bright orange fliers, saying they had moved their support from Schiff to Andrew. And they were not happy.

“We had a meeting. Gary was dropping out of this race because he knew he wasn’t getting the 30 percent [needed to stay on the endorsement ballot],” said Fire Fighters Local 82 President Mark Lakosky. “Mark Andrew was our second choice.”

Ten hours into the convention, delegates cast their third ballots: 1,219 voting, down only 61 from the second ballot. Hodges picked up 214 votes and Andrew gained 62.

At this point, rumors circulated that the Hodges people were not happy with the way third round ballots were counted.

Convention Chair Rick Stafford, who has chaired more DFL conventions than even he can remember, was becoming annoyed.

“Where I get angry is when the campaigns make charges that have no basis in fact or evidence,” Stafford told delegates.

Meanwhile, the Hodges supporters were assembling just outside of the Convention Center on the sidewalk. There were a few Schiff delegates still hanging around but not many. Most of the Andrew supporters remained in the auditorium awaiting the fourth-ballot results. 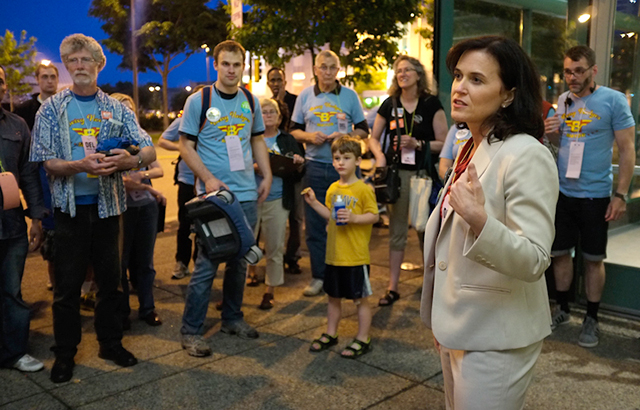 MinnPost photo by Terry GydesenCandidate Betsy Hodges on the sidewalk outside the convention center telling her supporters to go home.

The convention was nearing its 12th hour when the results were announced: 1,092 ballots cast with 656 needed for endorsement. That total was down 127 ballots from the previous vote and down 297 from the first ballot.

Time to move on to the fifth ballot and after that the option of voting for no endorsement.

But the Hodges people were gone. And so were some of the Andrew people. And so perhaps was the 729-member quorum required to do business.

They voted anyway, even with a doubtful quorum.  (The vote was counted, but totals were not released because it turned out there was no quorum.)

They also knew if they stayed in the Convention Center past midnight, it would cost the party another $20,000.

“There were some, I think, questionable back-room tricks going on,” said Andrew in an interview on an empty convention floor.

“I’m going to move forward as the leading candidate.  We had a majority of the votes,” said Andrew.  “We were ahead on every ballot of the day.”

And so begins the next phase of the campaign.