News
Two Cities
This coverage is made possible by a grant from The Saint Paul Foundation.
Aug. 8, 2013

St. Paul’s plan to get streetcars back on track in the capital city keeps rolling along, as a new report narrows the options to seven for proposed lines that would converge on downtown from neighborhoods around the city.

Now, the question is: If the political will and funding come together, which lines should be built first?

City officials and their consultant will spend the rest of the year expanding the study of the seven finalists before winnowing the list to one.

Modern streetscars are electrically powered and run on rails in mixed traffic. The streetcars would be powered by overhead wires.

Of course, these are still relatively early stages of what would be a giant and expensive infrastructure development, likely to cost hundreds of millions of dollars to build and operate.

City officials and their consultant say it would cost $50 million or more, per mile, to build. By 2018, that figure could be $60 million to $70 million a mile, said city planner Michelle Beaulieu.

So discussions about affordability and ridership numbers and tax districts could go on for years. Who knows if it will really happen?

But that’s what many thought about the Central Corridor light rail line 15 years ago, and now it’s almost ready to open with a price tag estimated at $957 million.

City Council Member Don Bostrom, who notes that he’s one of the few left at City Hall who actually rode the old streetcars that disappeared in the 1950s,  thinks it’s worth the discussion. One of the routes runs up Payne Avenue, into his district.

“There’s no question it would be very expensive, but it sure is worthwhile to be in the mix for something like that.

“Nobody ever thought Phalen Boulevard would be built either. [But it was.] So once it’s out there, there’s a chance to noodle on it a bit and say, ‘If we did this and we did that…’ and then it might have some legs.”

Residents will get a chance to learn more and weigh in on a preferred first line at two public hearings later this month. And there’s an online way to offer an opinion at Open St. Paul. 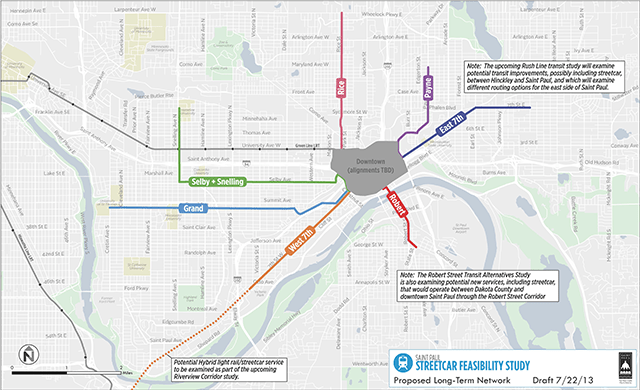 Courtesy of the City of St. Paul
Seven St. Paul streetcar routes were selected as finalists for study.

The selected routes to be studied are:

All got good marks in the new study for ridership potential, land use and development potential.

Some of the lines that didn’t make the cut in the Phase Two study were:

Consultant Geoff Slater, a principal at Nelson Nygaard, the national transportation consulting firm, says the next phase of study will look primarily at ridership and economic development potential along the seven selected routes, to determine which might be built first.

St. Paul produced a video explaining the streetcar plans and the needs for the study.

Ridership potential, based on numbers of people living and working along the routes, was factored into the recent process. Now, better ridership estimates will be calculated. And they’ll determine if major utility lines run under any of the proposed lines.

There’s also more work to be done on costs estimates, because the potential lines have been shortened in some cases. And there may be cost offsets, if some bus lines can be eliminated on some streetcar routes, said Slater, who is working with the city’s Planning and Economic Development Department on the streetcar studies.

Streetcars riders tend to be more local, Slater said, tending to ride within the route to lunch or shopping, rather than commuting or longer-distance trips more common on buses and light rail.

Often, planners think of streetcars as “pedestrian accelerators,” meaning that someone planning a long walk might hop on the streetcar instead, he said.

Streetcar planning is further along in Minneapolis, where the city plans to finance the effort with the help of a “value capture district,” which would redirect property tax payments from some of the buildings along the line.

Discussion of the pros and cons of the remaining seven St. Paul options — and which should go to the top of the list — has already begun on the city website. Here’s a sampling: