News
Two Cities
This coverage is made possible by a grant from The Saint Paul Foundation.
Aug. 26, 2013

An eight-way discussion about two Minneapolis pension funds is not the sort of thing that attracts a crowd at the State Fair.

It did, however, offer a glimpse at how eight of the city’s 35 mayoral candidates differ on that topic.

The Saturday afternoon session with University of Minnesota political science professor drew an audience made up mostly of campaign workers and folks in a nearby line to buy a Pronto Pup.

One strategic point: The candidates sat in the shade — the audience was not so lucky. It took real devotion to public policy discussions to stand for an hour in the 90-degrees sunshine and cheer on cue when your candidate came close to looking good.

Jacobs started the discussion by talking about a 50 percent increase in property taxes during Mayor R.T. Rybak’s administration and asking whether the recent merger of two city pension funds into the state system was appropriate and whether it brings fiscal order to the Minneapolis budget.

A bit of background on the two pension plans: They are closed funds, which means no one is paying into either one, but the funds are still paying out benefits to retired city police and fire department employees. They were also paying large sums of money to the people who managed the funds. In 2011, the two funds were merged with the state system.

Here are some of the highlights of key points the mayoral candidates (listed in order of presentation)  made about the situation:

“I generally supported the mayor’s pension issue because it was creating an onerous burden for many taxpayers. You said property tax went up 50 percent. For many people, they’ve gone up 90 or 100 percent. …

“The resolution of the pension issue is probably this: The rating agencies came in and they downgraded Minneapolis’ AAA credit rating, in part because they were critical of the extended burden that the pension settlement put on taxpayers long term.

“I actually led the way on this pension reform. When I walked into office, it was one of the most egregious things I’d seen in government, the way those specific closed pensions were set up.

“It was very expensive for the taxpayers. We were losing good union jobs in the city. The taxpayer was having to pay tens of millions of dollars a year in a way they shouldn’t have to.”

“I walked in and I said this has got to change. I was all but patted on the head by people who told me I shouldn’t take it on, that there were special interests that would fight me every step of the way, but I took it on. And when we won we saved the taxpayers $20 million in 2012. Pensioners got out of a broken system and into the state system, and we have a more stable pension system moving forward.”

“I’m very proud of the work we’ve done. It was key to doing what we’ve done. To offer a zero percent levy increase in 2012 [and] for the mayor to propose a 1 percent decrease this year were made possible by that.”

“We needed to reform our pensions. I like Mark. I like Betsy. But let’s speak bluntly here. The stakes are high.

“Mark and Betsy have each placed their political bets with the DFL insider system. I would note that Betsy got this one right. We needed to reform our pensions, and Betsy made the tough calls, the gutsy calls to get it right.

“Now, Betsy and I will sit here all day and talk about the things we disagree on. I do not think we need a $40 million-per-mile streetcar line. I’m one of the only candidates to say so, and Betsy will tell you she thinks we do, and we respectfully disagree on that one.

“But on pensions, yes. Those pensions needed to be reformed. I have nothing but profound respect for the firefighters and police officers who keep my kids and our city streets safe. The way those closed pensions were handled made no sense, and we needed to fix it. Betsy did the tough work to get it done.”

“It was absolutely the right thing to do. It’s easy to look back and criticize, but nothing is perfect. We’re dealing with a difficult situation. We made the right decision, and it wasn’t necessarily perfect but it was the best that could be achieved.

“Kudos for Betsy, for the leadership there and for all the members of the council. We’re all agreed this was the right thing to do. I couldn’t think of, and still can’t think of, a better resolution of the problem.”

“As I travel around the city, I don’t care if I’m on the far north side or the far south side, property taxes are something I hear about from every single person. … We need to address that, and one of the ways we can do that is growing the tax base.” 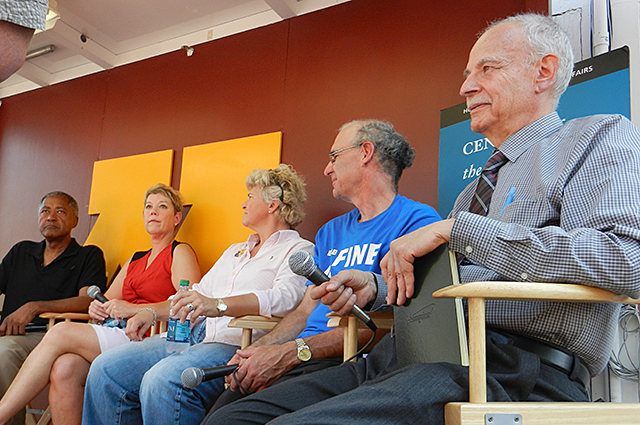 “I think it was exactly the right step, and kudos to Betsy and Council Member [Elizabeth] Glidden and the entire team that took that on. It’s something that needed to be done.”

“But there are three other points, as Jackie mentioned, that need to happen in terms of continuing to focus on economic development, to grow our tax base. That’s something that’s key to our continued success and sustainable jobs.

“We need to wean ourselves off Local Government Aid [from the state]. That’s something we don’t have any control over.  We’ve got to be more self-sufficient, so that when peaks and valleys happen, we have better control over our budget and we have a healthier balance sheet. And the third one is overall spending.

“I think the Moody downgrade was a red flag, a first warning call, that we really need to buckle down and focus on our most precious asset, which is investing in our people, rather than going after some of these projects that don’t really advance, where our assets become our liabilities.”

Asked by Jacobs if the city’s budget was balanced on the backs of firefighters and police, Fine responded:

“To a certain extent it was, but I think the question is: ‘Was it necessary and did something need to be done?’ I think it was a step in the right direction. I’ve been on the Park Board. We sort of have a little bit of a relationship because we have our own park police that operate basically under the same contract, but I want to correct a couple of things that have been said.

“Two [agencies] have always given us the highest rating. There was a recent slight downgrade by the third, just as there was a number of years ago, but it hasn’t affected at all the interest rate at which we are borrowing. … We are still paying the lowest rates for anybody in the country.”

“What they did to reform the pensions recently is a big plus and headed in the right direction.

“I think really, you have to take a strategic overview of the situation and the potential decrease in property tax. The potential economic health of this city is in the long term dependant on jobs. Jobs. Jobs. Jobs. That is the solution to most of our fiscal problems. …

“One of the ways to generate those — and I’ve been a supporter of this for a long time — is to get a downtown casino in Minneapolis. I think that will make a huge difference in terms of creating hundreds of jobs, a long-term tourist attraction and a way to have a tax-paying, and not a tax-grabbing, source of income that the city really needs. …

“I think we can provide a formidable attraction, both for Minneapolis residents and for tourists with a downtown casino. What it requires is the Legislature giving permission for a vote on this, letting the people decide if they want it.”

In most political debates, when your answer time is up, you are done talking even if you haven’t said everything you wanted to say. But not this time. Jacobs let candidates react to comments from other candidates.

Which is how Andrew got a second chance on the pension topic.

“The pension reform resulted in the downgrading of a AAA credit rating to a lower rating, so they didn’t get it all right,” he said. “I certainly don’t put that all at Council Member Hodges’ feet. There were many people involved in the pension reform.

“The mayor led it, Council Member Glidden was deeply involved, Council Member Hodges was involved, but it was many people trying to resolve the problem. It’s good that it got resolved, but we need to remind ourselves that we’re going to pay more money in property tax because of that settlement.”

She also commented about the rating downgrades: “Moody’s changed how they evaluated pensions funds, in part because Moody’s was a little bit stung about how they handled the foreclosure crisis, so they’re working hard to changes things. They are going through a list of cities and they are putting them at AAA all the way down the line, and we are part of that. … We will have no increased cost for our borrowing.”

Fine and Winton also had more to add.

“I want to clarify something as well,” said Fine. “You [Jacobs] made a statement about taxes increasing 50 percent during the mayor’s term . . . It’s much more than that. He’s been in office for 12 years. He’s not totally responsible — the City Council was also there, but it’s increased.”

“So was the Board of Estimate, Bob,” said Winton. “I mean you’re on the board that sets the maximum increase, so let’s take a little bit of responsibility there.”

“We don’t set the tax,” Fine replied. “Many times, when the City Council sent their 8 percent tax increase, you’ll find in the minutes that I voted against it numerous times. You can’t say that unless you look at the votes.”