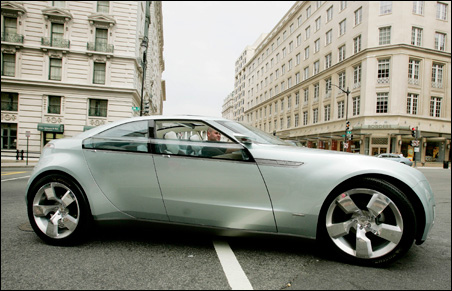 REUTERS/Larry Downing
The concept Chevrolet Volt automobile is driven on the streets of Washington.

Editor’s note: Uncle Al is back because he couldn’t make ends meet on his MinnPost pension.

Last week there was a news report that your old Uncle Al found even more annoying than the endless coverage of the 40th anniversary of Woodstock: General Motors’ new Volt gets 230 miles per gallon!

It was everywhere. It was bigger news than the arrival of Krispy Kreme. You might have classed it with the second coming of Brett Favre.

If you saw the report about the Volt on a network TV news show, you got it again, with more expressions of wonder and delight, when local news-anchor teams marveled at it: “Gosh, Bob, that’s way better than your hybrid, isn’t it?” “Shut up, Nancy.”

If you missed the Volt story, please tell your Uncle Al what cave you were in: He wants to rent it during the next occurrence of Shark Week.

Anyway, what made the Volt’s mileage announcement so painful for your old Uncle Al to encounter so often on his strolls through print, TV, radio and Internet news sources, much more than he minded the memorials to Woodstock, was this: Woodstock did happen 40 years ago. The Chevy Volt doesn’t get 230 miles per gallon, at least not in the way any normal person would understand that number. (If your present car gets 23 miles per gallon, the Volt won’t cost you only a tenth as much to drive.)

Permit your old Uncle Al to remove his jaunty retirement chapeau and don once again his now-threadbare electrical-engineer hat, if only to convince you that he is at least able to do long-division (although he is now too old to go forth and multiply).

Battery, engine, generator
OK, here’s the thing: The Volt is an electric car. It has an electric motor, powered by a very large rechargeable battery. It is said to have a range of about 40 miles before the battery runs out.

Because most people wouldn’t (usually) care to pitch a tent and forage for berries wherever they happen to be when the battery runs out, the Volt also has a small gasoline engine. When the battery stops battering, the gasoline engine kicks in, running a generator, which supplies power to the electric motor to get you home, where you plug the car in, typically overnight, to recharge the battery.

Or, if you were silly enough to take your 40-mile-range electric car on a trip to Dubuque, after the battery gives out the gasoline engine continues to run the generator to power the electric motor for up to a further 250 miles or so, until you need to buy more gas or you find someplace to charge the battery overnight. (Potosi, Wis., is delightful.)

When running the electric motor from its battery (up to 40 miles or so after being recharged), the Volt consumes no gasoline. When running on its gasoline engine turning a generator to power the electric motor, it seems (judging by what your old Uncle Al has read) to get about 50 miles per gallon, which is very nice mileage indeed, but not 230.

So where does the 230 number come from? In all fairness to GM, it seems that the Environmental Protection Agency is in the process of drawing up guidelines for how to report the fuel efficiency of alternatively-powered cars, and GM says it based its number on draft guidelines from the EPA, which are said to assume lots of battery-only travel and not much travel using the back-up gasoline engine and generator.

Maybe so. But that’s still no way to report how much it would cost to drive the Volt. It’s an electric car! If you never go more than 40 miles between recharges, it burns no gasoline at all! So it gets infinite miles per gallon! But you have to recharge its battery somehow. Which also costs money.

If you aren’t into the idea that the result of dividing 40 miles by zero gasoline is infinite, let your old Uncle Al give you a clearer example:

Let’s say your old Uncle Al went out in his spiffy new Volt and drove the 40 miles or so that the battery charge should allow him, getting him to his eclair and chocolate mousse wholesaler and almost home. But let’s say that when he was just half a block short of his house, the last of the battery charge was consumed, and the gasoline engine kicked in.

It would burn just a few drops of gasoline in the five or six seconds before he pulled up in front of his house and turned it off. So he could annoy his neighbors and friends by telling them, truthfully but rather peculiarly (as is his wont), that his car went 40 miles on a few drops of gas. And if he felt like being fully obnoxious — and if he could actually determine that the engine burned, say, one one-thousandth of a gallon in that half a block — he might say that his new Volt just got 40,000 miles per gallon.

(Or he could let the car stop down the block from his house — having consumed no gasoline at all — and then recharge it overnight at no cost by sneaking out after dark with an extension cord and plugging it into his neighbor’s Christmas-lights outlet, but that need not concern us here.)

5 cents per kilowatt-hour?
So. What your old Uncle Al is trying to say is that “miles per gallon” is an inappropriate measure for the cost of running an electric car. At the very least, the number should account for how much it costs to recharge the battery.

A GM official was quoted, in some of the longer accounts, to the effect that recharging the Volt would cost about 40 cents a day, at 5 cents per kilowatt-hour.

Giving the fellow the benefit of the doubt, your old Uncle Al assumes that this eight kilowatt-hours is for a full recharge of an exhausted battery, not for some “average” use of only 20 or 30 miles.

But he would like to buy his kilowatt-hours where GM does, for a nickel apiece. Because he elects instead to purchase his kilowatt-hours from Xcel Energy in Minneapolis (East, West, ohm’s best), and taking into account the Energy Charge, the Environment Improvement Rider, the Fuel Cost Charge, the Resource Adjustment and the Interim Rate Adjustment, plus City Fees, Transit Improvement tax, City Tax, County Tax and State Tax, your old uncle Al calculates that the eight kilowatt-hours to go 40 miles would cost 93 cents, not 40 cents.

And remember that this 108 mpg only applies to the first 40 miles; after that, you get the lousy 50 mpg that the gasoline engine delivers. So any standard figure for reporting overall mileage has to take into account some average amount of short and long-haul trips between recharges. But in no case will it be better than 108 (if gasoline costs $2.50 a gallon).

True, the 108-mpg figure rises as the cost of gasoline does. If gas was $3 a gallon, your 93 cents would buy only 0.31 gallons. And if you still went 40 miles on that smaller 93-cent fraction of a gallon, you’d be getting the equivalent of 129 miles per $3 gallon.

OK, how much would gasoline have to cost so that the ever-diminishing amount of gas you’d get for 93 cents would make a 40-mile trip seem to come in at the equivalent of the now-famous 230 mpg? Your old Uncle Al calculates that, for your 93 cents to be able to buy only the 0.17 gallons that — if it took you 40 miles — would be 230 miles per gallon, that gasoline would have to cost $5.35 a gallon!

Nonetheless, after all this, your old Uncle Al needs to remind you how easy it is to make numbers lie. His old Corvair, for example, which he might have driven to Woodstock had he not been at work that weekend, could go from 0 to 60 miles per hour in 2.34 seconds.

If he pushed it off a cliff.