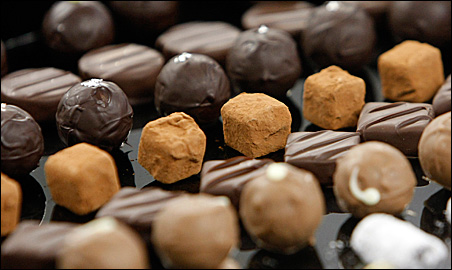 So it might seem odd that it has taken your old Uncle Al more than a week to pounce on the study that indicates that eating candy turns you into a violent criminal 24 years later.

You need to understand this about your old Uncle Al: He isn’t very tidy. He tore the clipping out of his local cellulose-based news source the day it appeared, put it on his desk and subsequently covered it with several days’ mail offers for pants with elastic waistbands, urgent subscription-expiration notices for magazines paid for through next July, and multiple copies of incomprehensible court orders allegedly confirming debtors’ reorganization plans (sent to Al Sicherman; Alan K. Sicherman; Sicherman, Alan; and the needlessly compact Sicherman,Alan).

So he just found the clipping. And it seemed so loony that he thinks it’s still worth a look. Here’s the key passage:

“British experts studied more than 17,000 children born in the 1970s, for about four decades. Of the children who ate candies or chocolates daily at age 10, 69 percent were later arrested for a violent offense by the age of 34. Of those who didn’t have any violent clashes, 42 percent ate sweets daily.”

This is no ordinary loony study. Look at that first statistic: 69 percent of kids who ate candy or chocolate daily at age 10 went on to become violent criminals! Lots of kids eat candy every day. Only on “Law & Order” do more than two-thirds of them grow up to be violent criminals. How could anybody — even a bunch of British experts — believe that?

In fact, the study didn’t say that 69 percent of candy eaters grow up to be violent criminals. By wasting a few hours of the precious time that remains to him on this planet looking online for other versions of this news item (you’re entirely welcome), your old Uncle Al traced that outlandish statistic to an erroneous Associated Press report, which many news outlets passed along.

Thus your old Uncle Al was able to restore to its rightful category — delightfully loony, instead of downright insane — the study’s conclusion that a criminally violent adulthood might be related to childhood candy-eating.

Now, then: Because virtually every online presence these days allows readers to comment, your old Uncle Al was treated to many versions of the kind of scoffing that he used to get the medium bucks for doing in print (allowing people who now have to scoff for themselves online to instead lead productive lives). Here’s one rather nice example, from a reader of the Canadian journal National Post, by someone called iamtom: “Almost 100% of convicted criminals had hair as children. If your child has a full head of hair he/she could be headed for the big house.”

After this, therefore…
When your old Uncle Al was your young Uncle Al, he learned a name for the kind of logical error that, the hairy-headed-child example implied, was the problem with the British study: Post hoc, ergo propter hoc. (That means “After this, therefore because of this,” but it is so much more annoying in Latin.) “Just because the criminal behavior came after the candy eating,” heistom would surely clarify, if he were to drop by, “that doesn’t mean the candy eating caused the criminal behavior.”

Usually a close reading of studies that appear to be loony reveals that the researchers were careful not to actually suggest that there is a cause-and-effect relationship, but instead to note that the two phenomena appear to be statistically related: “When we see children with greasy fingers, we also see chubbiness. We’re not saying that grease on their fingers causes the children to be portly, but the two seem to go together. Perhaps some common factor — potato chips? — is involved; more research is needed.

In fact, however, the authors of the candy-violence study actually did suggest that the candy-eating caused the criminal behavior. Several news reports quoted a news release written by Dr. Simon Moore, the study’s lead researcher: “Our favoured explanation is that giving children sweets and chocolate regularly may stop them learning how to wait to obtain something they want. Not being able to defer gratification may push them towards more impulsive behaviour, which is strongly associated with delinquency.”

There are other relationships than simple cause-and-effect that the good (and no-doubt honourable) Dr. Moore might have suggested. For example, it would have been helpful to know more about the objects of the reported criminal violence: Perhaps a third factor is at work. Were many of them, just possibly, in the dental profession? Could this violence by candy-eaters later in life be the result of slow-burning resentment of hours of drilling by cavity-filling dentists?

Loony study, 1992
To illustrate another possible sort of explanation, your old Uncle Al recalls an exceptionally loony 1992 study in which it was suggested that, while high cholesterol is bad, so is very low cholesterol: Statistics indicated that people with very low cholesterol levels were more likely to die from strokes, suicide, homicide, certain cancers, liver disease and lung disease.

OK for everything else, but low cholesterol and dying of homicide?

One cause-and-effect possibility that your middle-aged Uncle Al managed to think of was that people with low cholesterol annoy others by endlessly bragging about it. Eventually they offend somebody who has high cholesterol and a very low boiling point. Bang. Low cholesterol claims another victim.

But he noted that serious students of statistics might suggest that this could be an inverted reading of causality: In reality, it isn’t that people with low cholesterol tend to wind up getting shot, but instead that people who tend to get shot tend to have low cholesterol:

People who tend to get shot also tend to get lots of exercise — dodging bullets, leaping from moving vehicles, suddenly flinging themselves to the pavement — and studies have shown that exercise helps reduces levels of triglycerides and similar cholesterol-related gunk.

Similarly here, might the situation be not that children who eat candy tend to become violent criminals, but perhaps that some violent criminals (notably those with unreliable sources of income, who can’t regularly afford candy), tend to lash out at others when circumstances force them to recall how easy and wonderful — and candy-filled — their childhoods had been.

Your old Uncle Al had a happy, chocolate-filled childhood, and now he’s a pensioner and Hershey Special Dark bars start at around a buck.

So just watch it!

Can chocolate lead to a life of crime?