It seems to Uncle Al, now all grown up (and then some), that he doesn’t run into that construction very often anymore. He’s not sure whether that’s because people’s views of the world are more nuanced than they used to be (and thus they see three or even four kinds of people in the world), or because just starting out with that clause uses up 46 characters of the 140 allowed on Twitter.

He did, not long ago, run into this variation, surely amusing to math and computer cognoscenti: “There are 10 kinds of people in the world — those who understand binary numbers and those who don’t.” But by and large the form seems dead, and he would hardly use it himself, for fear of looking even more dated than he does already.

But there is one difference among people that seems to call out for that very construction, and he observed it last weekend at the MinnPost “Men Who Cook Dinner,” an event (offered to silent-auction attendees at MinnRoast 2010 last April), at which male MinnPost staffers — and hangers-on like Uncle Al — prepared dinner for some 40 guests. 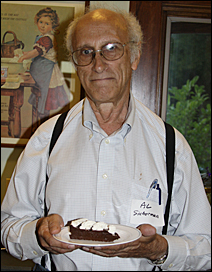 Uncle Al provided dessert, and knowing down to his socks that there are two kinds of people in the world — those who love chocolate with a peculiar, burning intensity, and those who really are quite happy with a dessert that contains no chocolate whatsoever — he prepared both a deeply –unbelievably — gooey chocolate dessert, which he will describe shortly, and Peaches and Cream Cake — a confection utterly lacking even in residual brownness.

Uncle Al has served the chocolate goo on many occasions, so he knew that lovers of chocolate would find happiness therein. And he was not surprised — though several chocolate lovers seemed to be — when folks expressed deep admiration for the Peaches and Cream Cake as well.

‘No accounting …’
This goes to show not only that are there the two kinds of people in the world previously mentioned, but also that, as Uncle Al’s father frequently observed, ” ‘There’s no accounting for taste,’ said the lady as she kissed the cow.” Uncle Al never understood the last part either, but that’s what his father frequently observed, and he thought you should see the entire remark. (There are two kinds of people in the world of journalism — those who strive for completeness, and editors.)

Anyway, here are the recipes.

The chocolate goo is based on a flourless cake recipe called “Chocolate Regal,” which appeared in “Maida Heatter’s Book of Great Chocolate Desserts.” As Uncle Al’s early alter ego, Al Sicherman, noted in his soon forgotten cookbook, “Caramel Knowledge,” that recipe had a seepage problem, in that a lot of butter would inevitably leak out of the pan while it baked.

Having fixed that problem with a significant change in the recipe, he felt comfortable that the resulting recipe was, in fact, no longer Maida Heatter’s “Chocolate Regal,” but was instead legitimately his own, so he called it “Chocolate Legal.”

You can call it anything you like, but be warned: The American Heart Association will not smile upon you for serving it.

Preheat the oven to 350 degrees, with a cookie sheet on a low shelf. Lightly grease bottom and sides of a 9-inch springform pan.

Melt the butter in a small saucepan over low heat. Set aside.

Combine the chocolate and the milk in a medium saucepan and cook over very low heat, stirring constantly, until all of the chocolate has melted and the mixture is free of even small solid bits. Pour and scrape the mixture into the large bowl of an electric mixer and beat briefly at low speed, just to catch any solid bits you missed.

Meanwhile separate the eggs, saving the whites for meringues, if you’re that kind of person, and putting the yolks in a small bowl. 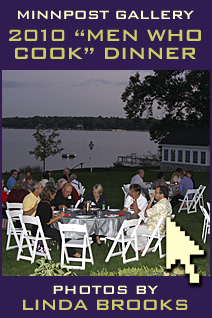 Continue to alternate additions of butter and egg yolk until all are used up, scraping the bowl each time. When the mixture is smooth, pour it into the prepared pan, and set it on the middle shelf of the oven (the hot cookie sheet already on the shelf below that one, ready to catch any tiny leaks from an imperfect springform pan.

Bake for 25 minutes. It will be soupy in the middle and look like a mistake, but unless you forgot to turn the oven on, it is done. (It will have reached 140 degrees for more than three minutes, so the eggs are pasteurized.)

Allow it to cool on a rack, and then refrigerate a few hours (or more). When it is fully cold, cut around the side of the pan with a small knife and remove the side. Decorate the top, if desired, with whipped cream. Refrigerate. The baked cake may be kept refrigerated for several days.

Although the Chocolate Legal is best when allowed to come to room temperature, it would be absolutely impossible to serve it then (it’s far too gooey). So a little before you’re planning to serve it, take it out of the refrigerator, cut it into 12 or 16 pieces (believe it or not, 12 is really a decent size serving) and plate however many portions you’re planning to serve at that point. Return the rest to the refrigerator, and allow the plated portions to warm before serving.

Now the Peaches and Cream Cake. The recipe is adapted from one in “The Cake Mix Doctor.” The original version is an excellent cake, moist and delicious, but without any hint of peach flavor. I added the peach gelatin mix, producing an even better cake — but still one that blindfold tasters probably would never identify as peachy. Setting aside its lack of peach flavor (a problem only to the baker, who wanted it to taste like peaches), this cake has been a hands-down favorite — rich and delicious — of people who tried it alongside other very good cakes and all by itself. The frosting of unsweetened whipped cream is elegant — and extremely rich.

In the large bowl of an electric mixer, combine the peach puree, cake mix, gelatin mix, melted butter, eggs and vanilla. Blend 1 minute at low speed, scraping the bowl occasionally. Beat 2 minutes or more at medium speed, until the mixture is smooth.

Divide the batter evenly among the prepared pans, smooth the tops and bake 30 to 35 minutes, until the layers spring back when lightly touched with a finger and a toothpick inserted in the center comes out clean.

Set the layers on wire racks over cookie sheets for 10 minutes to cool slightly, loosen each from the side of its pan, invert onto a rack, then invert again to upright. While the layers are still warm, and still on racks over cookie sheets, poke holes all over their tops with toothpicks. Pour the reserved syrup over the layers (¼ cup over each), using a pastry brush, if possible, to get all the syrup to soak into the cake, not run off the sides.

When the cake is fully cool, prepare the frosting: Beat the cream in the small bowl of an electric mixer at high speed, until stiff peaks form. Generously fill and frost the cooled cake. Refrigerate until ready to serve.

With Chocolate Legal and a peach cake, everyone is happy