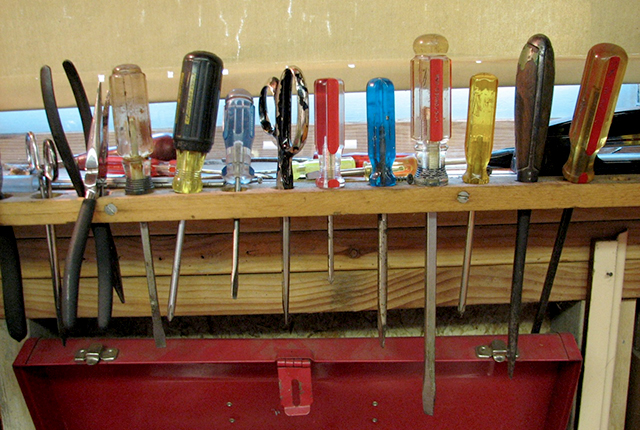 Regular readers will be painfully familiar with Uncle Al’s age-old  problem locating things that he knows are in his house. Somewhere. (Irregular readers must at this point imagine the Metamucil joke that Uncle Al traditionally offers at this point.)

To best illustrate where the most recent unhappy dropoff lies on the ski-slope that is his cognitive history, it is necessary for Uncle Al to retell, albeit briefly, an earlier tale:

Quite a few years ago, faced with a large quantity of used cooking oil badly stored in his basement, he needed to find a funnel. He knew he had one, because not six months earlier he had to buy one to replace a funnel he couldn’t find then. So he was very reluctant — understandably so, he believes — to buy yet another funnel.

Propelled by that reluctance, he spent many hours, over a considerable number of days, looking for his funnel. He will spare you a detailed description of every likely and unlikely place he looked, and how often he looked in each of them. Finally he gave up, and on a discount-store trip anyway, he bought the only funnel available there — a stupid set of three funnels, one way too big to be useful, one way too small to be useful (but darling), and one that was . . . OK, it was just right.

Anyway, he took the funnels down to the basement as soon as he got home, but immediately realized that the funneling task would take a while, and he’d rather have lunch first. So he set the funnels down on a shelf, next to…a funnel.

He doesn’t know if it was the funnel he had lost in the first place or the one he bought to replace that one but that he then couldn’t find. In any case he now had five funnels, one of which was lost.

It should be noted that Uncle Al has had very bad tool habits all his life. When he was a kid, his father often chided him for not putting tools back where they belonged. Several years ago, finally acknowledging that his father had had a point some 50 years earlier, he hung some pegboard and hooks for tools on the wall of the basement stairs. He didn’t go as far as many folks do with such a project, drawing outlines to indicate the place for each tool. At the time, that seemed a bit much.

Maybe he should have done so, because the pegboard, full of tools at first, is now largely empty, and heaven only knows where most of those tools are.

Not all of Uncle Al’s tool life is a debacle. Not long ago he noticed — and possibly overcame — another bad habit, probably at least as old as his habit of not putting tools away. That habit was a large part of why he has often been unable to find tools or utensils he had used only moments ago:

Quite unconsciously, it turns out, he carries with him, while looking for something, whatever he was holding when he came to need that other thing. Often, if looking for that second thing takes a while, or maybe if it involves moving things or needs two hands, without realizing he’s doing it he sets the first thing down. Thus it is that, a few minutes later, back at work with the retrieved second item, the first one — which he just had — is unaccountably missing!

This really stupid habit finally came to his attention while he was replacing some windows at a friend’s cabin last summer. He was masking each window before painting the trim, and every time he went to get the stepladder from where he’d left it after masking the highest parts of the previous window, when he came back to mask the highest parts of the new window, he didn’t have the masking tape. After the third or fourth time, he finally figured it out! Before looking for B, set A down! Wow!

Uncle Al has been around himself too long to think that achieving a breakthrough like this, as deeply insightful as it was, would change his life. But he could hope, couldn’t he?

There has been, of course, another lost-item episode, and it is the story he has taken all this time and effort to set up.

It was a few months ago, so he’s finally comfortable talking about it, but it was only a couple of months after the breakthrough of the stepladder and masking tape, while he still thought he might finally have stopped losing stuff.

He was getting ready to return to the cabin to install the last set of windows.

After he’d finished the previous set of windows, he had packed up the many tools and supplies (half-used tubes of caulk, half-stiff paint brushes, screwdrivers, nails and the like). By “packed up” he means that he threw the whole lot of them, unsorted, into several large boxes, and brought them back to Minneapolis. He brought a couple of boxes into his house immediately, as he could see that they contained (among much else) some things he might soon need.

He knew that those particular boxes were now in the basement. He’d put another one or two in the garage, and he was aware that a few loose things were still kicking around in the back of his truck.

So as the time approached for the last of the new windows to be installed, Uncle Al began rounding up the supplies and tools to take back to the cabin. Most of them were more-or-less where he’d left them — in the basement, in the garage, in the truck. But two key tools — a crowbar and a hammer — were nowhere to be found.

Thus it was that Uncle Al spent far too many hours, over far too many days, looking for the ^%$@ crowbar and hammer. Down to the basement and back. Out to the garage and back. Rummaging endlessly through the truck, not just in back, but under and behind the seats. As he told friends, it wouldn’t cost all that much to replace the crowbar and hammer, but he doesn’t need extra crowbars and hammers, and there was a principle:

He really wanted not to wind up duplicating the funnel experience.

In fact, it was the figurative shadow of the funnels that drew this depressing episode to a close. One of his lunch friends, hearing him list, yet again, all the places he’d looked the previous day, offered this amusing suggestion: “Have you looked next to your funnels?” (At least she thought it was amusing.) Uncle Al had, in fact, looked there many times. The crowbar and hammer weren’t there. But on his way home from lunch, the witticism hung in the air. And suddenly he had a different thought.

Could that be? No. Why in the world would he have done that? No. Simply not possible. And besides, if he’d really done that, the crowbar and hammer would have been obvious when he walked past them twice on each expedition to the basement.

But when he got home, he looked, and in fact that’s where the crowbar and hammer were. The very last place he thought of to look: On the almost-empty pegboard.

Remembering the case of the missing crowbar and hammer