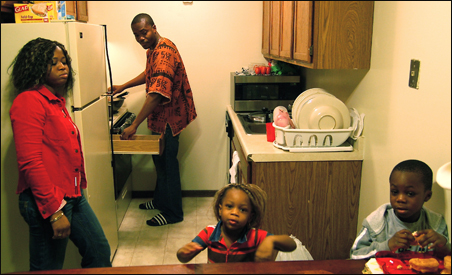 WHY WE ARE HERE

Cowami and Akossiwa Djagli won a lottery in 2001. By this time next year, they hope to be movie stars.

Their lottery winnings weren’t a large sum of money, but a chance to move to the United States from their native Togo in West Africa. It was a dream come true, but they’ve come to realize that living a better life in America isn’t enough. Now they have a new dream — to use what they’ve learned here to help improve the situation back home. 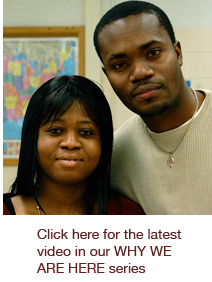 As for becoming movie stars, Cowami’s cousin Ade Adigoun wrote a screenplay for a romantic drama called “Beyond Love.” The Djaglis and a group of other Togolese actors have been rehearsing the script for several months. Shooting will begin soon and they hope sales of the film will raise enough money to help those they left behind in Africa.

Cowami, 32, is an operations clerk at Wells Fargo. Akossiwa, 29, is assistant chief housekeeper at the Millenium Hotel in Minneapolis. In the evening, they attend classes offered by the Minneapolis Public Schools Adult Basic Education program at the Lehmann Center.

Togo is not familiar to many Americans. It is a 60-mile wide, finger-shaped country, smaller in area than West Virginia. It’s not as well known as some of its neighbors, such as Ghana and Nigeria, and hasn’t experienced the amount of strife of some other African countries.

Poverty is pervasive and public health is also an issue, with many rural areas lacking clean water and good medical care. Because Togolese must pay for their education, many children do not attend school. Cowami wonders why most international aide efforts go to countries in the eastern and southern parts of Africa rather than Togo. He says that many people in Togo are also lacking basic necessities and that until recently, their government hasn’t been helpful to those in need. 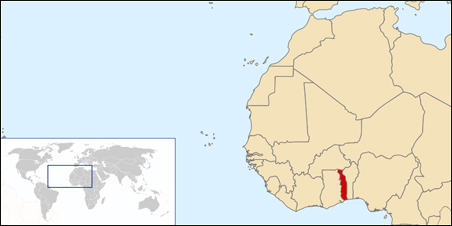 Courtesy of Rei-artur
Togo is a small country in West Africa.

Togo, part of the “slave coast” of West Africa, gained independence from France in 1960. Attempts at forming a democratic form of government have been stalled by several coups. General Gnassingbe Eyadema ruled for 38 years after seizing power in 1967. When he died in 2005, his son took control and ruled for a short time in defiance of a constitution that had been adopted in 1992. Recent elections have given some Togolese new hope that democracy will take hold and that living conditions will improve.

The lottery the Djaglis won is called the Diversity Visa Lottery. The U.S. government controls immigration by awarding green cards to a limited number of people from “underrepresented” countries each year. Cowami and Akossiwa were among the 50,000 winners from more than 10 million qualified applicants worldwide in 2001.

They chose to come to Minnesota because Cowami’s aunt lives here. They feel very fortunate to be here. Like most Africans, they say that the impression they had of the United States is that it’s a “dream country” where “everything is shining.”

“Everybody in Togo would like to get out from the country and go to maybe France or Germany, but everybody wish they can come to the United States,” Akossiwa says.

While glad to be in the United States, they have come to realize that emigration from Togo will not fix the problems there. Cowami is forming a nonprofit organization, called Jehovah-Jireh, which he hopes will be a way for people in the United States to help the Togolese attain a better way of life.

Cowami believes education is key to the future of Togo. Because families must pay for school and school supplies, many children don’t receive an education. He’s astounded that someone his age can go to school here for free, while children in Togo who “are the future of a country” can’t get an education. He knows that if he had not come to America and sent money back to his family, his brother could not have gone to school.

Cowami prefers to stay away from the politics of Togo, so that the government will let his organization do the things that he envisions. He says that the important thing he’s learned from living in the United States is that the way to make change is from the bottom up — people “putting their hands together to do what is right.”

“America did not build America,” he says. “Americans built America.”

Last year they took their children, son Junior, 5, and daughter Almira, 2, to Togo to visit their grandparents and see the country their parents left.

“We want them to know Africa,” says Akossiwa. “They should know where they are really from. Maybe some day they will go back and help with what we are trying to do.”