“Students need to move”, says Lisa Hartman, a fifth grade teacher at Andersen Elementary School in Minneapolis. She knows this from educational and brain research. She also knows it from 15 years of teaching.

Hartman has always taught her students about the benefits of good nutrition and exercise, but when she heard about teachers who were using large exercise balls instead of chairs in their classrooms, her “radar went up.”

As a fifth grade teacher myself, my own radar went up when I heard that she had gotten a “Wellness Grant” of $750 from the Minneapolis school district to pay for an exercise video, posters and exercise balls for all the students in two fifth-grade classrooms at Andersen.  I visited Hartman’s class last week to see how it all works.

“When we first started using the balls,” she said, “students had to earn the right to use them.”

She used them for short periods of time at first, teaching students how to use and take care of them. “They have to keep them pumped up and clean,” she said. She found that her students become quite attached to them and are eager to take on the responsibility. 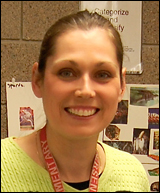 After everyone had earned their ball, they began using them all day in place of chairs. If students’ use of the ball is not appropriate, they lose the privilege of having their ball for the rest of the day.  “I’ve had to do that very few times,” she said. “It’s positive reinforcement. They will do anything to keep them.”

Hartman leads the class in a morning exercise routine on the balls, following along with the video. At first the students became tired during the workout, but now they can easily get through the entire video. “They were all winded,” she said, but now the physical benefits are starting to show.

During my visit, several students told me that sitting on the balls while they work helps them concentrate.  During the recent Minnesota Comprehensive Assessment (MCA) exams, students begged Hartman to try to change the start time of the test so they could get their morning workout in.  They felt it would help them do better on the test.