Simon Saitoti ole Tumanka was working his way through a large burrito when I met him recently on the University of Minnesota campus in Minneapolis. The typical American food portion is one of the many new things he’d experienced in the three days since arriving from his native Kenya. It’s his first trip outside of Africa. Saitoti and Hans Johnson, his host, had been sightseeing and were about to leave for a two-week visit to Duluth, where Johnson lives.

Saitoti was a Maasai warrior in his younger days. Now he is a cattle herder, teacher, school board chair, preacher, political activist, husband and father of five. At the age of 40 he’s considered a community elder.  His home is a mud and dung hut in the town of Namuncha, in the Rift Valley, but he owns a cell phone and a computer.

Johnson, 27, a native of Duluth, recently graduated from the University of Minnesota with a degree in anthropology. With the experiences he’s had in Kenya over the past seven years, he could probably teach some of the college courses he’s taken.

Johnson first became interested in the Maasai culture at age 14 when his dad returned from a trip to Africa with photos, a few artifacts and some audio recordings he’d made of Maasai music. Hans was interested in all of it, but was most taken by the singing. This fascination continued until at age 20, he decided to go to Kenya and begin a music preservation project with the Maasai. 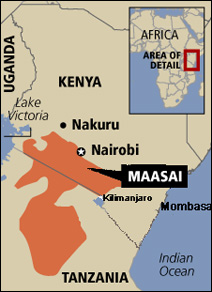 The Maasai, an indigenous people, have historically been semi-nomadic cattle herders and hunters in southern Kenya and northern Tanzania. Today there are over a half-million Maasai, about 350,000 living in Kenya. According to Saitoti, their property, their rights and their problems have been largely ignored by the Kenyan government for years, going all the way back to British colonial days.

Because of their relatively remote locations, most Maasai villages avoided direct contact with recent post-election violence in Kenya. But, according to Saitoti, the economic effects of the strife hit everyone hard. People were afraid to go into the cities. The economy came to a standstill as businesses and banks were closed. Saitote says the country is now beginning to “heal,” but he’s not optimistic that the government will help bring about any long-term change for his people.

Plans for political office
Saitoti is frustrated and plans to run for political office soon. He says the Maasai lack sufficient representation in the government. Maasai land has been “stolen — illegally taken” from them, he says, by corrupt and selfish officials with ties to other tribes.

Johnson met Saitoti on his first visit to Kenya in 2001. Saitoti became his guide and cultural mentor. On that and subsequent trips, they’ve made more than 300 recordings of Maasai tribal songs. Johnson produced a CD called “The Music of the Maasai,” which made enough money to allow him do more recording and begin other projects. He paid for Saitoti to finish his high school education and enlisted him as a partner in his organization, the Maasai Cultural Foundation. Sales of a second CD, called “Rhythm of the Maasai,” continue to raise funds for the organization. 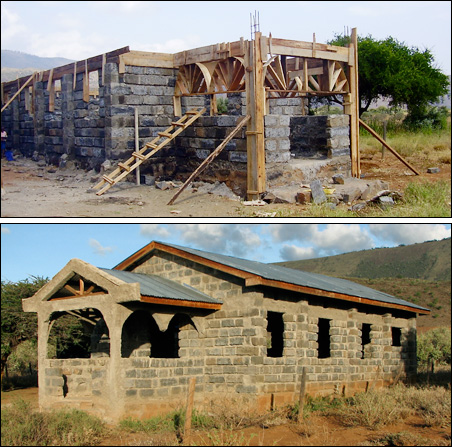 • Education projects, including starting an adult literacy center and constructing a building for the center.

• Cultural preservation through the recording of Maasai music.

A strong bond between the two men was immediately evident when I visited them. They chatted and joked together with the ease of old friends.

But with the camera rolling, Saitoti became serious. He wants everyone to know about what’s happening in Kenya and the problems facing the Maasai. Inter-tribal fighting, illegal government takeover of Massai land, recent post-election violence, lack of clean water, poor education, the effects of drought, the marriage of young girls and the spread of AIDS are among the many issues that he wants to discuss with anyone who is interested.

Saitoti appreciates the help that charities, missions, and other organizations have given the Maasai. He says that all the good things that are currently happening with his people are because of the efforts of these groups.

Johnson and Saitoti have been in northern Minnesota for the past week visiting schools, churches, social service organizations, and meeting with elected officials. Johnson hopes his friend will learn a lot about the United States and that Minnesotans learn about the Maasai people. Saitoti will return home to Kenya this weekend.

This trip is “an exchange of all sorts of things,” said Johnson, “I’m hoping he’ll gain a lot of knowledge — and maybe a little weight, too.” They both laughed as Saitoti prepared to finish his burrito.

For more information about the Maasai people and links to other websites go here.