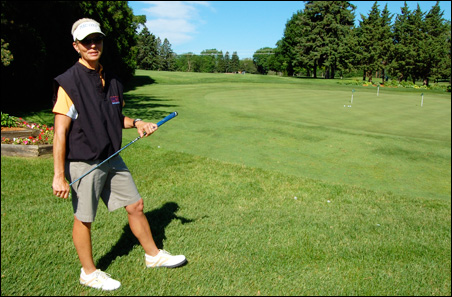 MinnPost photo by Steve Date
Martha Nause, the oldest player in the Women’s U.S. Open this week, will be playing with the youngest golfer in the tournament.

At 53, Minnesota’s Martha Nause will be the oldest player in the Women’s U.S. Open this week at Interlachen Country Club in Edina. She recently made it through sectional qualifying at the Skokie Country Club in Glencoe, Illinois.

How does she feel about being the oldest? “I like it a lot,” she replies. She credits her longevity in large part to staying in good physical condition. “I’ve always enjoyed working out,” she said, “even way before it was popular with pro golfers.”

Her playing partners for the first two rounds will be an old friend and a 13 year-old — the youngest player in the tournament. “How funny is that?!” Nause emailed me when she learned of her playing partners. She will be grouped with Sherri Turner (51), one of the few players in the tournament that she knew well from her tour days, and Alexis Thompson, who is 40 years Nause’s junior.

Nause compares the influx of very young players competing in LPGA events over the past few years to what happened to running after Roger Bannister first broke the 4-minute mile “barrier” in 1954. When Michele Wie came along a few years ago and played well at such a young age, “everyone thought, ‘Hey I can do that, too,'” she said.

Younger players and a much more international field are among the changes in the tour since Nause retired in 1999. Another big difference is the amount of money up for grabs these days. Now a winner often takes home as much as the total tournament purse was worth when Nause was playing regularly.

Nause doesn’t feel badly about not making the big bucks, though, as she remembers the tour’s close-knit community in her day. “Yeah, I did miss out on the big money,” she said, “but from what I’ve heard about the tour culture now, they’re missing out on a lot of what I had back then.”

Quiet determination
Nause plays as many of the Legends Tour events as she can, but is frustrated that women’s senior golf tour hasn’t caught on with sponsors like the men’s Champions Tour. The men have proven that golfers in their 50s and beyond can still compete at a high level. She’s convinced that by staying in good physical shape, using smart practice techniques, wise course management and playing in more events, she and other women of her age can stay competitive for many more years.

Nause displays a quiet, methodical determination on the practice range, but breaks into a quick smile when asked what she would like to talk about. “Let’s talk about Macalester golf,” she said. It’s clear she pours her heart and soul into coaching golf at Macalester College in St. paul. She said she’s constantly thinking about how her tournament experiences can help her be a better coach. She’s also realizing how the skills she’s developed as a teacher have forced her to examine her own game and have improved her level of play.

Nause was struggling and discouraged with her game during the week before the sectional qualifying and had thoughts of withdrawing. Friends encouraged her to hang in there and not give up. Karla Leon, one of her Macalester golfers who lives in Ecuador, gave her an email pep talk that boosted her spirits and reminded her to employ some of the strategies she teaches her players to use when they get frustrated. This was an unexpected, but much appreciated, return for her efforts as coach.

The biggest crowds this week will be around people named Lorena, Annika, Michele and others, but a lot of baby boomers as well as some middle-schoolers might find some inspiration on Interlachen’s first tee at 12:30 Thursday. It’s become more common for very young players to compete at this level, but Martha Nause and Sherri Turner are hoping that some “4-minute miles” will start happening for them and other women in their age bracket.

“I don’t go into any tournament without wanting to win it,” she said about her goals for this week. “Realistically, I don’t know how my game will stand up against … the current top players in the world.”

She can hardly wait to find out.

PREVIOUS: This golfer regained her balance, and now may be in the Women’s U.S. Open